Are Galaxies the Accretion Disks of the Supermassive Black Holes at their Center?

By Adam Kirk
|
8 minutes
Home »Astronomy »Are Galaxies the Accretion Disks of the Supermassive Black Holes at their Center?

At the heart of our galaxy, the Milky Way is a supermassive black hole (SMBH), which is also the case for practically every other large galaxy that astronomers have observed.

We see our ‘local’ SMBH in the center of the Milky Way, 26,600 light-years away from us. It is cataloged as Sagittarius A* (say Sagittarius a-star) and is close to the Butterfly Cluster.

It’s believed that supermassive black holes routinely form at the center of galaxies because that is where there is a denser region of gas at their formation – leading to older stars and a higher likelihood of black holes having had the chance to form.

However, seeing each SMBH surrounded by a flat disk of swirling disk of stars, such as in M31, Andromeda Galaxy, pictured above, leads to an obvious question: are galaxies the extended accretion disks of SMBHs at their center?

Let’s take a look at the answer, starting with clarifying what an accretion disk is.

What is an Accretion Disk?

An accretion disk is nothing more complex than a flat disk of material ‘accreting’ onto a massive object at its center.

Accreting means that material is being laid onto or mass is being added, to the central object. This is why the object at the center of the disk is known as the ‘accretor’.

Examples of accretion disks can be found in star formation and in binary stars where one star is accreting from the other, known as a vampiric star. It is believed that the planets in our solar system were formed from the remains of our sun’s accretion disk after it began to shine.

Accretion disks can contain gas, dust, and plasma that is falling into the central body. The matter can’t fall directly onto the central mass because of its angular momentum, so it swirls around it, perpendicular to the accretor’s axis of rotation.

Through friction, collisions, and viscosity, the particles in the accretion disk shed angular momentum and move steadily closer to the central mass. As they do so, their orbital speed increases to a maximum rate just before making contact with the accretor.

How We See a Black Hole’s Accretion Disk

Black holes themselves are, by definition, invisible to us because they emit no light or electromagnetic radiation. However, we can see their accretion disks.

The first direct image of a black hole (below) was captured in 2019 and what it actually shows is the black hole’s accretion disk. The black hole itself is, well, black because nothing can escape from it. This black hole is at the center of a galaxy cataloged as M87, which you can see for yourself with a telescope for galaxies.

We’ve just seen that the accretion disk emits more extreme radiation at the edge closest to the accretor. In the case of a black hole, matter in the disk is traveling near light speed just before it passes the event horizon – the point of no return.

It is collisions between particles in the disk which cause the release of radiation and these collisions become more violent, and emit higher intensity radiation as their speed increases.

Emission sources in space known as X-Ray binaries contain an accretor which is either a black hole or neutron star.

The temperature of the accretion disk in an X-Ray binary has such variety that farthest from the accretor, it might only be thousands of Kelvin and only emit infrared radiation.

However, the most violent, extreme conditions, closest to the central black hole, generate temperatures measured in millions of Kelvin. It is from here that X-rays are emitted.

Between these two extremes, the accretion disk emits light in the visible wavelengths.

Quasars (quasi-stellar objects) are believed to be the emissions of energy from violent, high-energy collisions inside the accretion disks around black holes formed when the universe was young. Accretion disks around black holes and neutron stars are more efficient at releasing energy than thermonuclear reactions, which is why they are thought to be among the most energetic objects in the universe.

Now we know what an accretion disk is, we’re in a position to answer our original question, i.e. is a galaxy the extended accretion disk of its central black hole?

Is a Galaxy the Accretion Disk of a Supermassive Black Hole?

One thing we didn’t discuss above is that accretion disks are Keplerian systems, named after the famous German astronomer, Johanne Kepler. A Keplerian system describes one body being in orbit around another, like Mars around the sun.

To answer our question, we should think of the accretion disk as being in orbit around the black hole.

In such a system, the mass is dominated by the central body. It is that which draws the particle in the accretion disk towards the center.

How Massive is a Supermassive Black Hole Compared to a Galaxy?

The black hole at the center of a galaxy is nowhere near as big compared to its galaxy as the sun is compared to the solar system.

By way of example, the supermassive black hole at the center of the Milky Way, Sagittarius A*, has a mass of just over 4.1 million suns.

The mass of the Milky Way is 1.5 trillion times the sun’s mass. Let’s do the math:

Therefore, the black hole’s mass is just 0.00003% of the Milky Way’s. In other words, it does not exert anywhere enough gravitational influence for the stars of the Milky Way to eventually accrete into it.

Significantly more mass comes from the bright bulge of stars in the galactic center.

For more galactic math, check out our look at whether galaxies are mostly empty space (opens a new tab).

How Wide Does a Black Hole’s Accretion Disk Get?

The width of the accretion disk varies relative to the mass of the black hole, but scientists have found that a typical accretion disk for a supermassive black hole is about 10 light-days wide. This is the extent to which surrounding matter is sucked into the disk by the central body’s gravity well.

Ten light-days is, on our human scale at least, a large distance.

Consider that planet Neptune, the most distant planet in our solar system, is about four light-hours from the sun. It is quickly apparent that 10 light-days is a significantly longer distance than that.

In fact, ten light-days is about 70 times the radius of our solar system!

On galactic scales, 10 light-days is barely any distance at all.

Doing the math once more, we find that the typical SMBH accretion disk diameter is between 0.00006% and 0.00012% of the diameter of the galaxy.

Let’s put that into a perspective we tiny humans can grasp.

A US nickel coin is about 21mm across. Imagine that the nickel represents our black hole and its accretion disk.

At the same scale, the Milky Way galaxy would be a circle that could fit 3-and-a-half American football pitches inside its diameter!

As huge and phenomenal as black holes are, they are puny when compared to the gargantuan nature of a galaxy with 100 billion stars in it. They are the equivalent of a nickel in the middle of three football pitches laid end to end.

A galaxy is not the accretion disk of the supermassive black hole at its center. As powerful as they are, black holes are tiny when compared to the mass and extent of a galaxy, so they can’t exert the gravitational influence needed to turn a galaxy into an accretion disk.

Accretion disks are flat spinning disks of material falling into a body with a large mass at its center. We find many of them throughout space.

Black holes have accretion disks, which is how we imaged one for the first time in 2019. On a human scale, the accretion disk of a black hole is huge, but it is still proportional to the mass of the black hole.

However, a black hole, even a supermassive one, is tiny in comparison to the galaxy which surrounds it, when measured either by the proportion of mass or gravitational reach.

There is not enough mass and, therefore, gravitational influence, for the galaxy to be the accretion disk for a black hole.

If you’d like to learn more about the accretion disks of black holes, watch the useful video below. 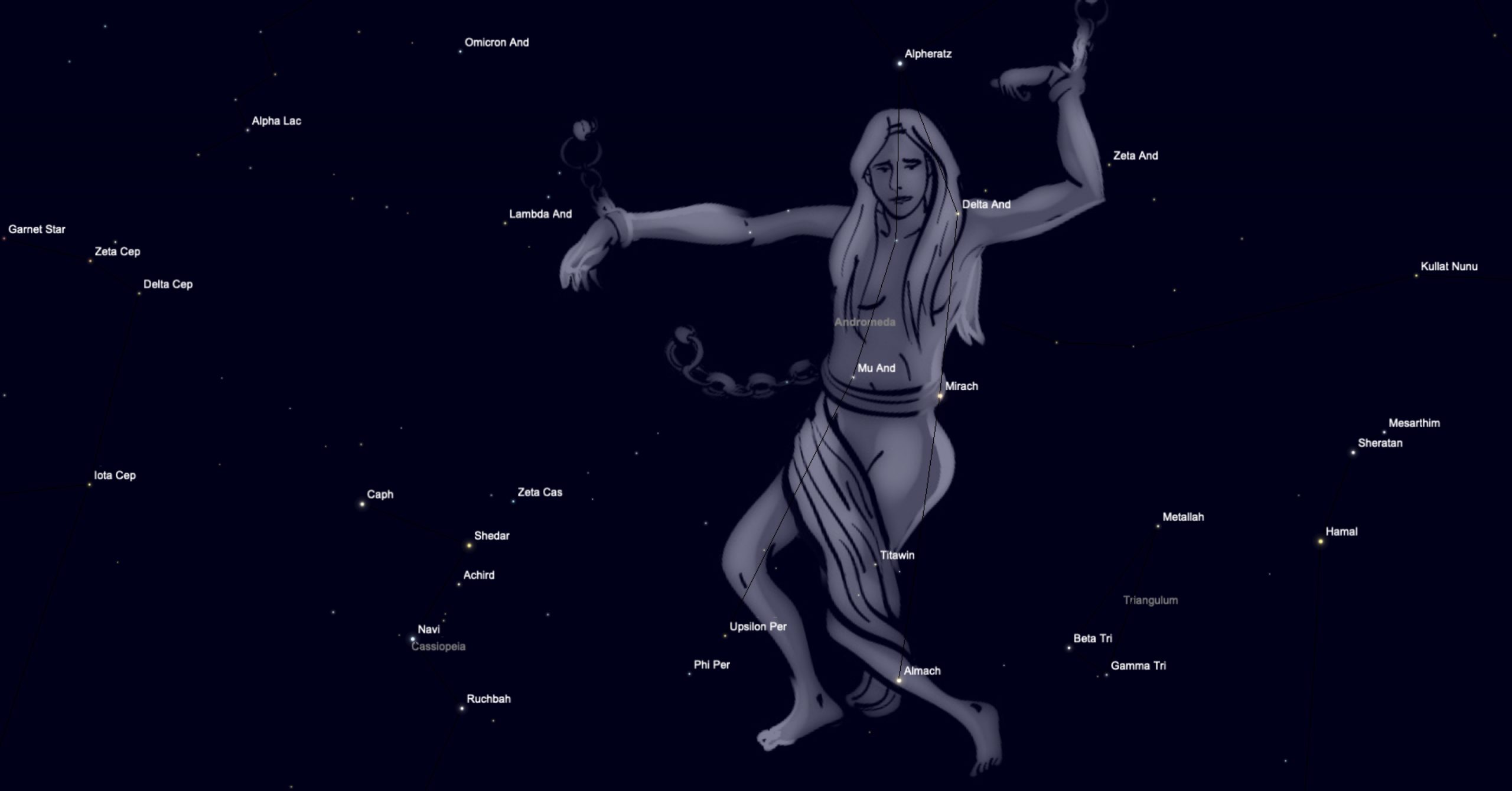 Andromeda Constellation – The Astronomer’s Guide to the Chained Princess