Aries Constellation Guide – A Ram In The Darkness

In this article, we’ll be sharing with you everything you need to know about the constellation of Aries, including how to find it, deep space objects contained within it, and how to use it to find other night sky objects more easily.

The Constellation of Aries

Aries is Latin for ‘ram’ and this faint constellation was cataloged by Ptolemy more than 2000 years ago.

In Greek mythology, Aries is identified with the golden ram in the story of Phrixus and Helle. Phrixus and Helle (twins, brother and sister) were the children of a Boeotian king whose stepmother plotted to get rid of them.

Their real mother sent a winged ram with golden wool to save them from death and the ram flew east to Colchis with the children on its back. Unfortunately, Helle fell to her death en route but Phrixus survived the journey and was welcomed by the king of Colchis.

Phrixus sacrificed the ram to the gods and presented the ram’s Golden Fleece to the king of Colchis. Years later Jason and the Argonauts would retrieve this same Golden Fleece from a temple.

To help you spot Aries, here’s how SkySafari 6 shows the ram. Note the star Algol in the top left, a bright star in the constellation of Perseus, and the Pleiades (with Alcyone shown) in the bottom left.

Aries has an area of 441 square degrees making it the 39th largest of the 88 recognized constellations.

Historically, the Sun passed through this constellation at the vernal equinox. The vernal equinox is the moment (in time) when the Sun is exactly above the equator, and day and night are of approximately equal length for everyone on Earth.

Zero hours of right ascension is defined as the imaginary line joining the north and south celestial poles which runs through the center of the sun at the moment of the vernal equinox.

The point (in space) where the ecliptic and celestial sphere intersect is known as the ‘First Point of Aries’ and coincides with 0° right ascension 0° declination. See the star map below for detail.

Greek astronomer Hipparchus of Nicaea (190-120 BCE) introduced the term ‘First Point of Aries’ when he observed that the Sun was within the constellation Aries during the vernal equinox.

Oddly, the First Point of Aries actually lies in Pisces today, which is due to Earth’s precession – the process by which Earth wobbles a little on its axis. This wobble means the Sun’s apparent vernal equinox position has continuously shifted westward along the ecliptic by about 1° every 73 years, which is why it is currently in Pisces.

In the next section discover how to find Aries.

How to Find Aries in the Night Sky

Aries is part of the zodiac family of constellations and is visible to observers at latitudes between +90° and -60°.

Northern Hemisphere observers can see Aries in the evening from September to March. It is highest in the sky at 9pm in January, as the SkySafari 6 image shows (all star maps on this page are produced with SkySafari 6).

To find Aries, do a naked eye search for the pole star Polaris in Ursa Minor and Cassiopeia. Draw an imaginary line from Polaris to Segin at the east end of Cassiopeia’s unmistakable ‘W’ asterism (~25 °) then extend this line ~40° until you find the brightest star in Aries, Hamal, between the Pleiades and the Great Square of Pegasus.

Alternatively, do a naked-eye search for Orion’s Belt. Draw an imaginary line from Alnitak to Mintaka (~3°), extend this line southwest of Aldebaran in Taurus and the Pleiades, about 40° in all.

Look for Aries between the Pleiades and Great Square of Pegasus.

To find Aries’s exact position for your location on any night, use software such as the free Stellarium or SkySafari.

The Brightest Stars of Aries Constellation

Aries is not a large constellation and only contains a handful of stars brighter than magnitude 5.0. See them all on the map below, with details about the best ones beneath that.

Alpha Arietis (Hamal) – This 2.01 magnitude orange giant is the brightest star in Aries. ‘Hamal’ comes from the Arabic word for ‘lamb’. Hamal is 66 light-years away.

Beta Arietis (Sheratan) – This double star is the second brightest star in Aries. Its components are both white, main-sequence stars. The primary shines at magnitude 2.66 magnitude, while the secondary has a magnitude of 5.20. They are too close together (as near as 0.08 astronomical units) to be separated in a visual telescope.

Sheratan is 60 light-years away.

Gamma Arietis (Mesarthim) – This double star is the fourth brightest star in Aries. The 3.88 magnitude, blue-white, main-sequence primary and the 4.58 magnitude, secondary component are 7.4 arcseconds apart.

Mesarthim is 204 light-years away.

Delta Arietis (Botein) – This magnitude 4.34 orange giant star is the fifth brightest star in Aries. Botein is 170 light-years away.

Epsilon Arietis (48 Ari) – This double star is 293 light-years away from us. The star shines with a total magnitude of 4.63. Its two components ate white main-sequence stars, the brightest shining at magnitude 5.2, with the secondary being magnitude 5.6. The two stars are 1.3 arcseconds apart and easy to split at higher magnification.

41 Arietis – This double star is the third brightest star in Aries and is 160 light-years away. The 3.61 magnitude, blue-white, main-sequence primary and 11.04 magnitude secondary components are 34.0 arcseconds apart.

There are so few bright stars in Aries that it is a poor starting point for star hopping.

Objects To See Within Aries

Aries does not contain any Messier objects and has few deep sky objects for small telescope observers.

It is visible in a small scope at low magnification in a dark sky. Higher power and a larger aperture reveal that it looks somewhat like an apostrophe in shape.

Aries is a medium-sized, dim constellation with few notable stars. Look for it between the Pleiades and the Great Square of Pegasus this winter. 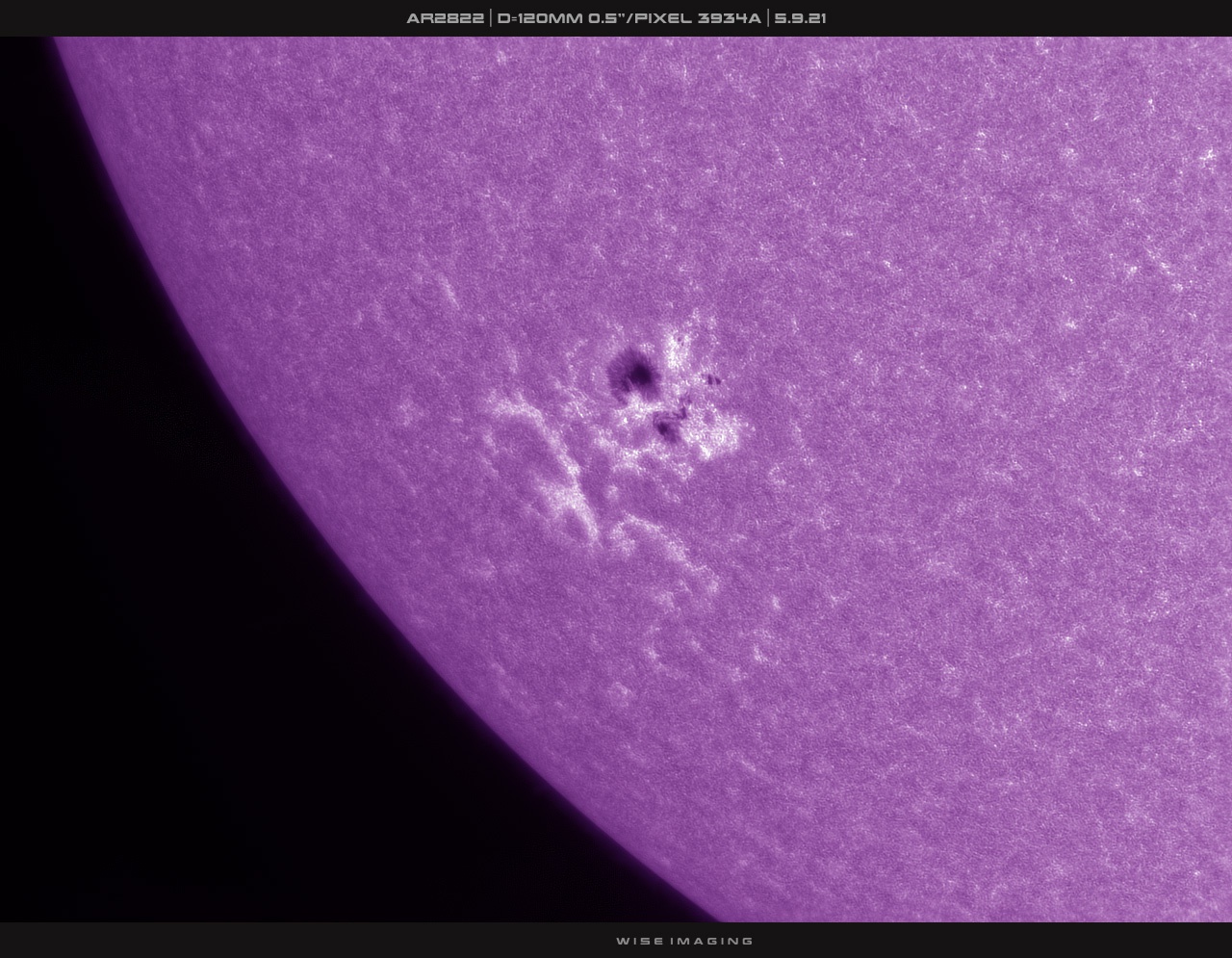 Surface Features of the Sun