Telescope eyepiece kits are a great idea for anyone new to backyard astronomy. For one price, they instantly provide a selection of eyepieces and filters to improve the versatility of your telescope setup.

However, they might be causing you to spend money on equipment that you don’t need and that cash could be spent on better quality kit.

The big three astronomy manufacturers, Celestron, Orion and Meade, each produce their own eyepiece sets and, in this article, we review and compare each to see what value for money they offer.

If you’re in a hurry, click the buttons in the table below to see the relevant kit and all its details on Amazon. 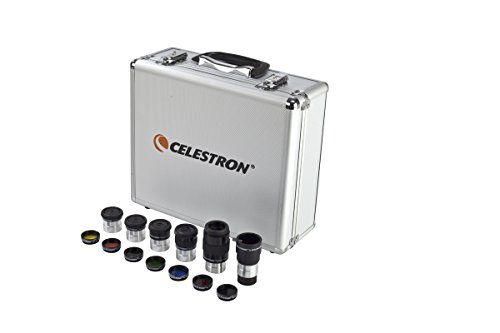 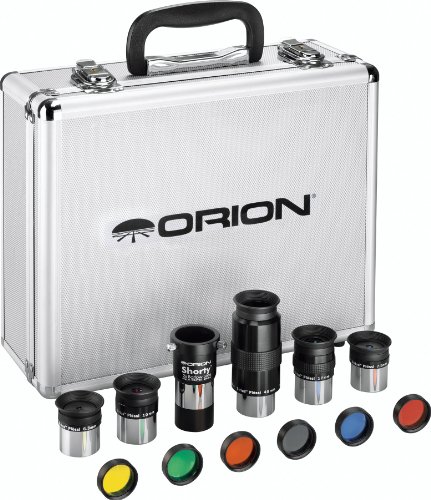 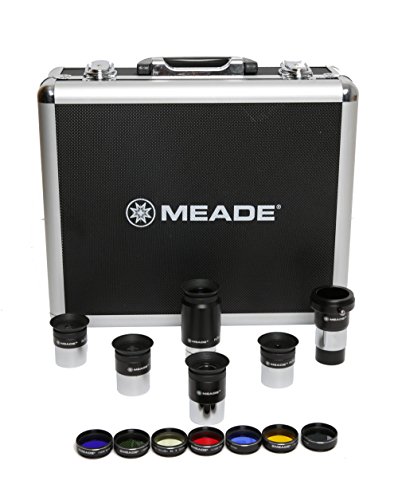 What Is In a Telescope Eyepiece Set?

Each of the three sets comprises a combination of eyepieces and filters. In total, the sets have between 12 and 14 pieces in them. Each kit has 1.25″ eyepieces in it. If your scope accepts 2″ eyepieces, you’ll need an adaptor to use the kits.

As a minimum, we recommend you have three different eyepieces and a Barlow lens so you can select from 6 different magnification levels. Ideally, the combination should be such that you get good steps between magnification from c.75x to 300x.

What you want to avoid is steps in magnification which are too close together, such as 90x, 95x and 105x because it just doesn’t deliver a great difference in viewing. Instead, we’ll be looking for something 90x, 110x, 150x.

The most useful filters, especially for beginners, are those which make views of the moon and planets better. They do this by improving contrast ratios which helps us see more surface details that we can without a filter.

We’ve written about lunar filters and planetary filters (and deep space filters) in detail before. We’re not expecting deep space filters in these sets but we will be looking at the spread, quality and usefulness of the moon and planet filters provided in each eyepiece kit.

Read on for our detailed reviews of each of the three telescope accessory kits, including their contents and how they can improve your backyard astronomy.

There are 13 separate pieces in this Celestron set, including 5 Plössl eyepieces, a 2x Barlow lens, 6 colored filters and a moon filter.

In this set, the eyepieces and 2x Barlow lens will provide:

This is a good selection of magnification options for a small telescope. Ranging from 23x which is a good finder and wide field of view magnification through to the rarely used but nice to have 250x for detailed lunar work.

In between these extremes are good steps of magnification useful for different levels of planetary and DSO detail.

As well as a lunar filter, Celestron’s kit contains 6 colored filters. These can be used to improve contrast on planetary surfaces, allowing us to see better detail that we can without them.

This is a strong selection of filters, enhancing the best features of the solar system. The only change we would make is swapping out the #58 light green for a #38A dark blue to give slightly more flexibility and usefulness.

This telescope accessory set has a good selection of eyepieces and filters. There is almost no redundancy in overlapping magnifications and the filters will improve your views of the brightest five planets.

Like the Celestron kit, the eyepieces in Orion’s offering are of the Sirius Plössl design. In a 750mm focal length telescope, they provide the following magnification options.

This is a good combination with no serious overlaps, but there will be little to gain going from 38x to 44x or 75x to 88x.

There are good step progressions at the lower magnification end, which makes sense for the smaller telescope user. The gaps at the top end are wider, like we’d expect, but there’s no big gun to max out a crystal clear night’s viewing.

The lunar filter is a standard 13% transmission (i.e. it lets 13% of the moon’s light pass through it) and then there are are the following colored filters.

This Orion set is summed up as a not-quite-as-good copy of the Celestron set. It has one fewer filter and the eyepieces are so similar as to offer no distinction.

We would only recommend this kit if it were cheaper than the Celestron (see the table above for current pricing) because it has nothing else to distinguish it.

The final accessory set in our review is from Meade Instruments. Their set has five 1.25″ Meade Series 4000 Plössl eyepieces, a 2x Barlow lens, a 13% transmission lunar filter and 6 color filters.

As with the other two kits, we’ve listed below the eyepieces included in the Meade set and the magnification they’ll achieve in a 750mm focal length telescope, both with and without using the 2x Barlow.

This is an almost identical mix to the one contained in Celestron’s kit. It suffers similarly with the close overlap of 42x & 46x and 83x & 84x, making two of the ten magnification options redundant.

However, it does have good progression from a low, widefield 23x up to 83x and then decent options for higher magnifications up to 250x. This is all perfectly reasonable for the smaller telescope user.

The lunar filter in this Meade kit is also a 13% transmission variety, which is the standard offering throughout.

This selection of filters stands out for being notably different from both Celestron and Orion sets. The #15 DArk Yellow is a strange decision, being a jack of all trades but master of none.

However, it is great to see #82A Light Blue and #38A Dark Blue which add some power to your Mars, Venus and Jupiter viewing. The inclusion of #8 Light Yellow to see the moon better with a smaller scope may seem odd given the lunar filter already in the pack, but it might actually be a great choice given the target market.

Meade’s unique selling point with their telescope accessory kit is the selection of color filters. It is markedly different from the other two kits and offers great options for the moon and five bright planets.

The eyepieces have a couple of redundant magnifications but they are not substantially different from Celestron or Orion. This is a buy if you plan to spend a lot of your astronomy looking at planets.

Which Is The Best Telescope Accessory Set?

In some ways this is not an easy decision, because they are all quite similar. On that basis, we would recommend going down the price route and opting for the cheapest kit.

The Orion Telescope Accessory Kit does not offer either the best range of options nor the most, so we would not recommend that one.

Meade’s Eyepiece and Filter set does have a unique collection of color filters. If you expect to spend the majority of your astronomy time observing the planets, it may be that which tips the balance in their favor.

Overall though, for the combination of eyepieces, number of accessories and (at the time of writing) best price, we have to recommend Celestron’s Eyepiece and Filter Kit as the best telescope eyepiece set available today.