Cancer Constellation, the Astronomer’s Guide to the Crab in the Sky

By Tanya C. Forde
|
6 minutes
Home »Astronomy »Cancer Constellation, the Astronomer’s Guide to the Crab in the Sky

Cancer is a faint constellation with only 2 stars above magnitude 4, so it’s no surprise that it can easily be overlooked.

Cancer is the Latin word for ‘crab’ and this constellation gets its name from Greek mythology. This specific crab attacked Heracles during his Twelve Labours. To help you spot Cancer, here’s what SkySafari 6 shows.

In this article, we’ll be sharing with you everything you need to know about this constellation, including how to find it and the best deep space objects contained within it, and how to use Cancer to find other night sky objects more easily.

The Constellation of Cancer

Cancer is a large constellation. In fact, it is the 31st largest of the 88 recognized constellations covering 506 square degrees of sky. Many of us will recognize it as the faint, upside-down ‘y’ in the sky, or as the home of the Beehive cluster (M44).

In reality, as the picture below shows, the whole constellation covers a much larger area of sky than just the upside-down ‘y’.

It is not a bright constellation, so it is not great for star hopping. However, many of its brighter stars are multiples, which make for good observation challenges. Cancer also contains three decent deep-sky objects to hunt for too. More on both of those below.

A couple of facts about the constellation before we get back to astronomy:

Okay, let’s return to the stars themselves, beginning with how to find them.

How to Find Cancer In The Night Sky

For evening astronomers, Cancer first appears over the horizon in December. It’s practically at the zenith in March and then slowly sinks back down to the horizon in June. It’s not visible in northern hemisphere evenings from July to November.

The constellation of Cancer is bordered by the constellations Leo, Gemini, Lynx, Hydra and Canis Minor. To find it, draw an imaginary line between Regulus (in Leo) and Pollux (in Gemini). The middle of Cancer is located at the midpoint of this line.

Nearby, the Beehive Cluster will be the naked-eye visible, fuzzy object about 1.5o (or 3 full-Moon widths) across (see picture).

The further south you are, the closer to the horizon Cancer brushes. To find its exact position for your location on any night, use software such as Stellarium (free) or SkySafari.

With the brightest star shining at magnitude 3.5, none of Cancer’s stars are particularly bright, but several are notable for other reasons. These are the brightest stars, the numbers refer to the diagram below.

1. Alpha Cancri (Acubens) – At magnitude 4.25, it’s the fourth brightest star in Cancer, except… it is actually four stars! This quadruple star system is ~174 light-years away and consists of a bright pair of dwarf stars 0.1 arcseconds apart with a magnitude 12 companion pair of stars 11 arcseconds away.

2. Beta Cancri (Altarf) – With a magnitude of 3.5, this binary star system is the brightest star in Cancer. The primary star is an orange giant and its magnitude 12 companion is located 29 arcseconds away. Beta Cancri is ~290 light-years away.

3. Delta Cancri (Asellus Australis) – With a magnitude of 3.94, this orange giant is the second brightest star in Cancer. It is ~180 light-years away and marks the location of the Beehive Cluster. Asellus Australis means “southern donkey colt” in Latin.

4. Gamma Cancri (Asellus Borealis) – This white subgiant has a magnitude of 4.66 and is located ~158 light-years away. It is located so close to the ecliptic that it can be occulted by planets and the moon. Asellus Borealis means “northern donkey colt” in Latin.

5. 55 Cancri (Copernicus) – This magnitude 6 double star consists of a yellow main sequence dwarf star and a magnitude 16 red dwarf star. The pair are located just ~41 light-years away. In 2010, astronomers confirmed five extrasolar planets orbiting the primary star in this system, 55 Cancri A.

6. Zeta Cancri (Tegmine) – This is yet another multiple star system. The main star has a magnitude of 4.67 and is located ~83 light-years away. Zeta-1 Cancri and Zeta-2 Cancri, are a pair of binary stars 5.06 arcseconds apart.

8. Xi Cancri (Nahn) – This 5.16 magnitude double star is ~381 light-years away. Xi Cancri is a spectroscopic binary star, meaning that we can only infer a partner star from the periodic dimming and brightening of the main star. The primary (Xi Cancri A) is a yellow giant and its companion star (Xi Cancri B) is only 0.1 arcseconds away.

The dimness of Cancer’s stars makes it a poor starting point for star hopping.

Objects to See Within Cancer

While Cancer is a dim constellation, it does contain some notable deep sky objects.

This famous star cluster is cataloged as M44 in the Messier list but is also known as the Beehive Cluster and Praesepe (meaning ‘the manger’ in Latin). It’s one of the larger open clusters in our night sky with an apparent size of 70.0 arcminutes. Praesepe shines at magnitude of 3.09 and is a favorite sight for backyard astronomers.

Find it located at right ascension 8h 41.5 m and declination 19o 36’. M44 is located ~520 light-years away, making it one of the nearest clusters to our solar system. It is visible to the naked eye, but expect to see ~75 stars with a small telescope.

The second Messier object in Cancer is also an open cluster. This one has an apparent size of 25.0 arcminutes and a magnitude of 6.9. It is located at right ascension 8h 52.4m and declination 11o 43’. Unusually, this puts it outside of the plane of the Milky Way. M67 is ~2600 light-years away and is thought to be ~4 billion years old.

This spiral galaxy has an apparent size of 4.2 x 3.4 arcminutes and shines at magnitude 10.18, making it a tricky spot even for a large backyard scope. It is located at right ascension 9h 11.4m and declination 6o 57’. Over the past 30 years, this galaxy has been the host to 5 supernova explosions.

Cancer is the faint zodiacal constellation between Leo and Gemini. While it may be hard to see from light polluted areas, it is home to several multi-star systems and some impressive deep-sky objects.

Look for the inverted “y” in the spring and explore its wonders. 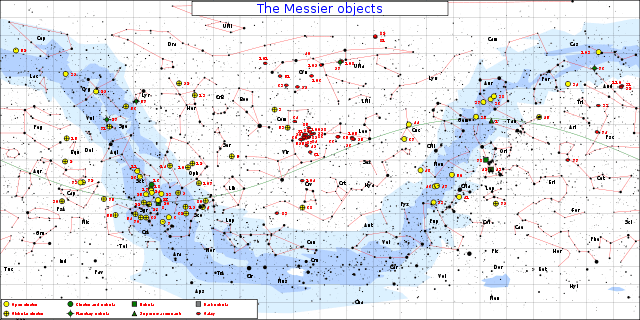 How to Read a Star Chart