In this article, we’ll be sharing with you everything you need to know about the constellation of Capricornus, including how to find it, deep space objects contained within it, and how to use it to find other night sky objects more easily.

The Constellation of Capricornus

The Ancient Babylonians and Ancient Sumerians knew this constellation as the ‘goat-fish’ and it marked the Winter Solstice in c.3000 B.C.

Capricornus is one of the constellations that Greek astronomer Ptolemy cataloged over 2000 years ago and ‘Capricornus’ means ‘the goat-fish’ or ‘horned goat’ in Latin.

In Greek mythology, Capricornus is associated with the forest deity Pan who was part goat. When Zeus and the other gods went to war with the Titans, Pan warned the gods that Typhon (a monster sent by Gaia) was approaching. It was Pan’s idea that the gods disguise themselves as animals to hide and he jumped into the Nile and turned into a fish to escape Typhon.

To help you spot Capricornus, here’s what SkySafari 6 shows.

Capricornus has an area of 414 square degrees making it the 40th largest of the 88 recognized constellations. It’s also the second faintest constellation (after Cancer), containing only one star brighter than magnitude 3.

Capricornus is shaped more like an arrowhead to modern observers – none of us would likely claim to see it as a goat-fish. Although, you might see it as representing two horns.

Alternatively, it’s easier to see it as a quirky, open-mouthed smile, much like that made famous by the Joker in Batman.

In the next section discover how to find Capricornus.

How To Find Capricornus In The Night Sky

Capricornus is part of the zodiac family of constellations. The zodiac constellations are those which the sun appears to travel through over the course of a year as we orbit it.

Since the sun passes through Capricornus, so does the line of the ecliptic. The moon and planets all follow that line, so they too seem to pass through this constellation on their own orbits around our star.

The goat is visible to observers at latitudes between +60° and -90°. Northern Hemisphere observers can see it in the evening sky from July to December, with the best views between September and October.

Southern Hemisphere observers can enjoy the stars of Capricornus over the same period but it will be much higher in your sky than when viewed from mid-northern latitudes.

To find Capricornus, do a naked-eye search for the Great Square of Pegasus. When you have it, join a line from Alpheratz in the northeast corner to Markab in the southwest.

Next, extend this line to 2x its original length and you’ll land in Capricornus, having passed through Aquarius. It’s about 40° from Markab to Theta Capricorni, which is about four times the width of your closed fist held at arm’s length (link opens new tab showing you how to estimate distances).

See the image below for more detail, click on it for a full-screen version.

To find the exact position of Capricornus for your location on any night, use astronomy software such as Stellarium (free) or SkySafari.

The Brightest Stars in Capricornus

Capricornus is not a large constellation and, as we mentioned earlier, only one of its stars is brighter than magnitude 3, which makes it harder than most constellations to pick out.

However, it contains about 15 stars brighter than magnitude 5. See all of them in the SkySafari image below, with their details listed below that.

‘Algedi’ is derived from the Arabic word for ‘the billy goat’.

The 3.57 magnitude, yellow-orange giant, primary, and 11.11 magnitude, secondary components are 6.6 arcseconds apart. This star system is 106 light-years away from us.

The two Algedi stars, i.e. Algedi Prima and Algedi Secunda, are 0.11° apart in the night sky.

Beta1 Capricorni (Dabih Major) – is another double star and the second brightest star in Capricornus with a magnitude of 3.08 and is found near the northwest tip of the smile.

The primary component shines at magnitude 3.08 and is a yellow star, the secondary component is a magnitude 6.08 magnitude main-sequence star. It is also known as Dabih Minor. The two suns are 205.4 arcseconds apart.

Beta1 Capricorni is 200 light-years away and is so close to the ecliptic that it can be occulted by the Moon. ‘Dabih’ comes from the Arabic for ‘butchers’.

Gamma Capricorni (Nashira) – This 3.68 magnitude, yellow-white giant is the fourth brightest star in Capricornus. We can find it near the northwest corner of Capricornus’ smile.

Nashira is 157 light-years away and means ‘bearer of good news’ in Arabic.

Delta Capricorni (Deneb Algiedi, Deneb Algedi, Scheddi) – This double star is the brightest in Capricornus and marks the northeast corner of the constellation.

The 2.84 magnitude white giant primary and its magnitude 15.00 companion are 49.9 arcseconds apart.

The star is only 39 light-years away and its name means ‘tail of the goat’ in Arabic.

Zeta Capricorni – is another double star. This one is 386 light-years away and shines at magnitude 3.75. The yellow-orange supergiant primary and its magnitude 12.50 secondary component are too close to be split in an amateur telescope.

The two stars are 0.3 arcseconds apart and very tough to split.

Theta Capricorni – Is the star splitting the ‘top lip’ of the mouth in two. It is a white star on the main sequence and it shines at magnitude 4.07. Theta Cap is 162 light-years away and has a mass of 2.7 Solar masses, a diameter 2.9 times that of the sun, and is 1.6 times hotter than our home star.

Iota Capricorni – is 197 light-years away and shines at magnitude 4.28. It is a yellow-orange giant and a variable star whose magnitude ranges from 4.25 to 4.31 over 68 days.

Kappa Capricorni – This 4.73 magnitude, yellow-orange giant is 294 light-years away. Its mass is only 10% more than the sun’s, but its diameter is 16 times that of our home star. It is also 17% cooler than the Sun.

Nu Capricorni – presents us with another double star, this one is 253 light-years away. The magnitude 4.76 blue-white, main-sequence primary, and its magnitude 11.80 secondary component are 53.2 arcseconds apart.

Rho Capricorni – This double star is one of the stars within 100 light-years of our solar system… just. It is 99 light-years away and shines at magnitude 4.80 magnitude. Rho Cap consists of a yellow-white subgiant primary and a magnitude 6.88 secondary that are 1.9 arcseconds apart.

Psi Capricorni – This double star is only half the distance of Rho Cap at 48 light-years from us. The 4.15 magnitude yellow-white, main-sequence primary star has a secondary component 11.4 arcseconds apart.

Omega Capricorni – This 4.11 magnitude orange-red giant is 840 light-years away and marks the bottom of Capricornus’ smile.

Capricornus is the starting point for one well-known star hop, to the globular cluster at 30th position on the Messier Catalog.

M30 – Identify Deneb Algiedi at the northeast corner of Capricornus, hop ~7° southwest to Zeta Capricorni, then ~3° east to M30. See more details about the cluster below.

Objects To See Within Capricornus

Capricornus contains one Messier object and no other deep sky objects suitable for small telescope users.

Capricornus is the second faintest constellation with only one star brighter than magnitude 3. For that reason, it is not a constellation we often point our telescopes towards for its own sake.

However, it is a zodiac constellation and regularly forms the backdrop to the moon and planets, which is the more likely reason for us to be looking its way.

Look for this medium-sized constellation using the Great Square of Pegasus in the evenings in the second half of the year. 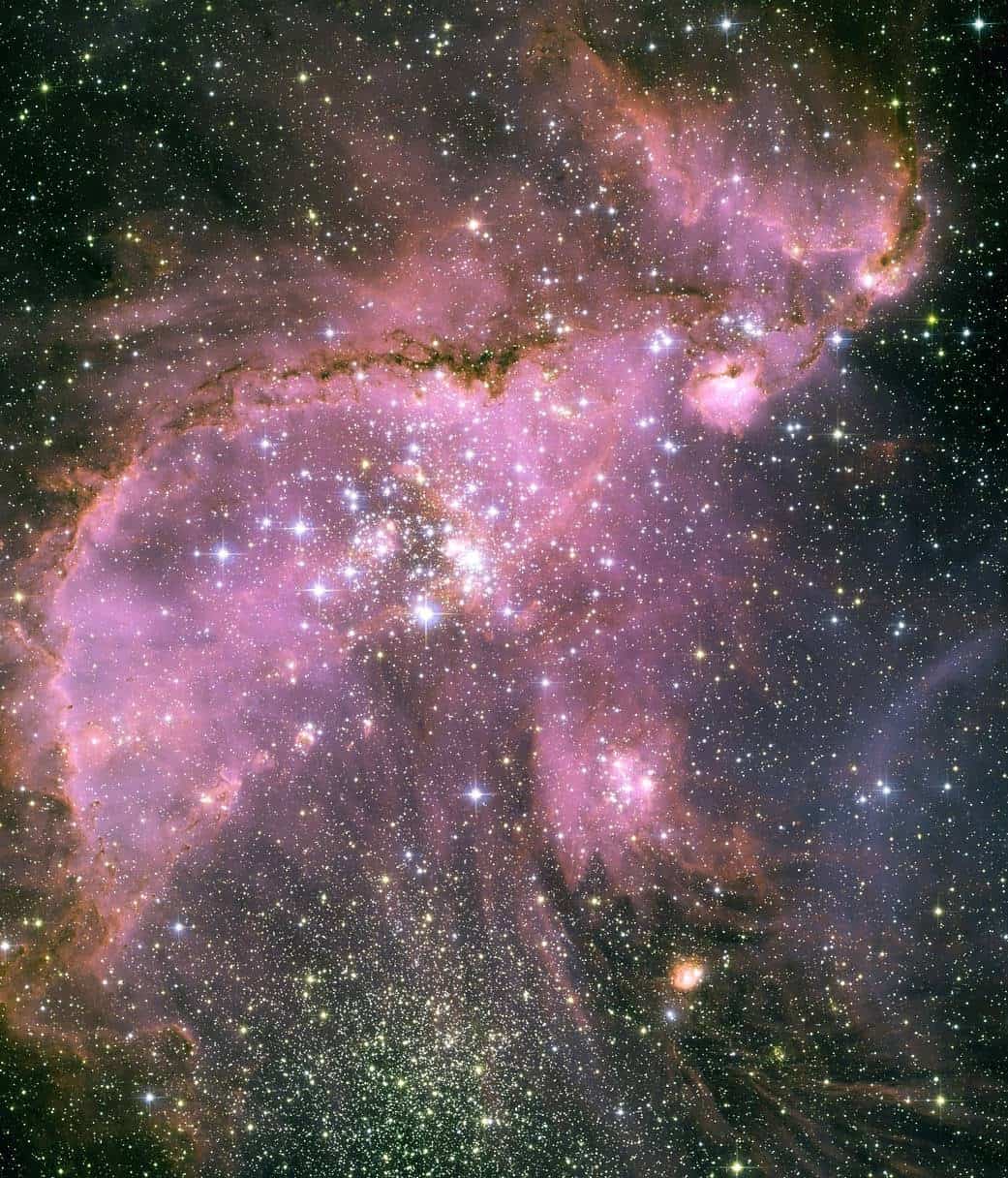