What are the Different Types of Stars?

By Sharmila Kuthunur
|
11 minutes
Home »Astronomy »What are the Different Types of Stars?

Our Milky Way galaxy consists of 100,000 million stars of a rich variety!

The youngest ones are gathering gas and dust to begin nuclear fusion. The middle-aged ones have been steadily existing for a few hundred thousand years.

When stars are detected, they are put into different groups: brown, white, or red dwarfs, red giants, pulsars, supergiant, etc. How do scientists do this?

The HR diagram serves to be essential in understanding the life cycle of stars based on their color and brightness (luminosity).

On the Y-axis, the diagram shows a star’s luminosity relative to the sun. Stars higher up the chart that the sun (marked as 1 on the Y-axis) are brighter than the sun, those lower down are dimmer.

The chart’s X-axis shows stars of decreasing surface temperature, which we measure using their color.

Their stellar evolution is seen in four stages or groups in the diagram:

The Morgan-Keenan Classification of Star Temperatures

The Morgan-Keenan (MK) classification of star temperature divides stars into 7 categories (from hottest to coolest: OBAFGKM) based on the temperature of their chromosphere. These letters come from an earlier developed Harvard Classification that was found to be inadequate

The mnemonic ‘Oh be a fine girl, kiss me’ may not be politically correct but will help you remember their order.

These letters are paired with a single digit from 0-9 that sub-divides these main classifications. 0 is the hottest and 9 the coolest, so a G0 star is hotter than a G6 star, for example.

The MK stellar classification system of stars is based on their spectrum as determined by temperature. It does not take into account gravity and luminosity, which affect brightness.

For example, two stars can have the same temperature but drastically different luminosities.

To recognize stars based on gravity and luminosity, the Yerkes classification system was built, as part of which six classes exist.

To summarize, a star is graded with both a Morgan-Keenan classification and a Yerkes luminosity. The two are melded together, so the star Epsilon Piscium, a double star in the constellation of Pisces, is graded as G9III.

The ‘G9’ portion means it is in the ninth grade (dimmest) of category G, which is for yellow stars like our sun. The ‘III’ part means it is a giant star.

Altogether, the classification tells us that Epsilon Piscium is a giant yellow star.

However, stars don’t have to slot into a single grading. A star that is classified as A3-4IV/V is said to be in between A3 and A4 spectral classes and is either a sub-giant or a main-sequence star.

Some stars are too young to be called main-sequence stars. Let’s look at some of these exceptions.

A protostar marks the first step in stellar evolution. The accumulation of gas and dust looks like a star but isn’t because it does not yet have enough pressure and temperature to conduct fusion in its core.

Protostars are covered in deep layers of gas and dust and do not radiate much energy, which is why they are not optically visible except in very low wavelengths.

When stellar winds disperse the outer layers, protostars enter the pre-main-sequence stage. They now occupy the stellar birthline of the HR diagram, which is the beginning of a relationship between luminosity and temperature.

Protostars of low mass remain in this stage for 500,000 years.

HOPS 383 in Orion was the first and youngest eruption documented.

T Tauri stars are the intermediate step for a star that’s on its way to becoming a main-sequence star.

These stars are similar in size and heat to main sequence stars like our Sun. But, they lack the core temperature for fusion to occur.

The lifetime of a star in the T Tauri phase is 100 million years.

Brown dwarfs are said to be stuck in between a planet and a star because they exhibit many properties seen in both groups but are neither planets nor stars.

Brown dwarfs fuse deuterium very early during their formation. This early fusion gives them some radiance (which is why we can detect them), but it is not enough to call them stars.

Because the fusion is not ongoing, the leftover energy from their formation and this fusion is radiated outward but exhausts over time.

This is why brown dwarfs cool with time and get harder to detect as they age.

Contrary to popular belief, Jupiter is not a brown dwarf or any other kind of failed star.

The majority of the existing stars are in the main-sequence phase, which is where they spend a large portion of their lifetime.

Main sequence stars are classified into two main groups depending on their main source of energy.

Stars as massive as the Sun or lower derive their energy from proton-proton-chain reactions. This type of nuclear fusion combines two atoms of hydrogen into one helium. This is the fusion reaction happening inside the Sun.

Stars more massive than our Sun get their energy from the CNO cycle, which stands for carbon, nitrogen, and oxygen.

Massive stars have greater pressure in their cores, due to which they exhaust their hydrogen supply much more rapidly than less massive stars.

In short, the greater a star’s mass, the shorter its lifetime.

The smallest stars are red dwarfs. They are also the most common type of stars found in our celestial neighborhood.

Their low mass and size cause them to burn their hydrogen very slowly, giving them a lifetime of 10 trillion years. This is the reason there are so many of them: they are the longest-lived stars.

Stars like our Sun are G-type main-sequence stars whose mass ranges from 0.8 to 1.1 times the Sun’s mass. The sun itself is a G2V star.

The term ‘yellow’ is a misnomer because these stars aren’t actually yellow but white. The sun looks yellow because of the effect of our atmosphere.

The Sun fuses 600 million tons of hydrogen to helium every second.

On the other end of the spectrum from red dwarfs lie the supergiant stars. These are so huge that they exhaust their hydrogen supply in less than 30 million years.

At the end of their lives, they expand to become supergiant red stars, just like a main-sequence star becomes a red giant.

There is a difference with the supergiants though: they don’t have the mass to fuse elements heavier than helium, so they don’t form planetary nebula by exploding their outer shells into space.

Instead, fusion works its way up the periodic table in their core until they collapse. These stars end life as neutron stars or even a black hole.

The most massive supergiants are still expected to die in a blaze of glory, as a blisteringly dramatic supernova. All that’s left behind is a neutron star.

Stars that occupy the main sequence section on the HR diagram must have active fusion processes in their cores.

But eventually, they will run out of hydrogen. Depending on how massive they were and their composition, they will then occupy one of the following groups.

Blue giant stars occupy the top right corner of the HR diagram. The stars that were initially twice the Sun’s mass, 5-10 times its radius, and with absolute magnitudes of zero or brighter end up as blue giants.

Blue giants aren’t as easily found as red giants because the stars that fit the above description are less common.

Stars that have an initial mass between 0.3 to 8 times the Sun’s mass evolve into red giants at the end of their lifetime.

Their color ranges from yellowish-orange to red. Most commonly seen bright stars are red dwarfs, like Arcturus and Gamma Crucis.

A star of mass similar to the Sun’s will expand after its hydrogen is exhausted in its core. The outer shell will still be fusing the last little hydrogen during the red giant phase, which lasts between a few thousand years to 1 billion years.

Outer shells are thrown off to form planetary nebulae while the core eventually collapses back to be a white dwarf.

White dwarfs are thought to be the final stage of a star’s life. It is the dense matter left behind after the death of a main-sequence star, collapsed into a body the size of Earth.

Because the core is no longer active, white dwarfs cool over billions of years until they eventually fade into the darkness of space as black dwarfs.

This timeline is longer than the age of the universe itself (13.8 billion years), which is why there are no known black dwarfs.

The nearest known white dwarf, however, is 8.6 light-years away — Sirius B.

Supergiant stars that weighed about 10 to 25 times the Sun’s mass die by exploding into a breathtaking supernova.

After the explosion, the remnants of the star leave behind a collapsed core that forces together electrons and protons to become neutrons, giving rise to a neutron star.

The neutrons stop the collapsing process, so a neutron star remains in that state for nearly 100 billion years. This star weighs 1.4 times the Sun and is as small as 12.5 miles or 20 km across (a small city’s size).

If the initial stars were any more massive than 20 times the Sun’s mass, the neutron star would continue collapsing until a black hole formed.

Almost all stars that shrink into neutron stars hold onto their angular momentum. But because neutron stars are only 20 km across, their small size causes them to rotate speedily.

Sometimes, the neutron star’s magnetic and rotational axes are not aligned perfectly.

If the mass of a star’s dead core exceeds 3 to 4 times the Sun’s mass, then the core will turn into a black hole.

The gravity of such dense cores is so high that not even light can escape, and all the matter is packed into a tiny space (called singularity) — so tiny that the smallest black hole is only the size of an atom!

Variable stars, as their name reflects, fluctuate periodically in their magnitude. Because they are not officially classified into any star type, variable stars are not seen on the HR diagram. But their classification is based on the cause for their variability.

Few stars fluctuate intrinsically when they increase and decrease in brightness.

Many other stars seem to be varying in their brightness simply because their companion orbits them, and their luminosity decreases when the pair’s transit aligns with Earth.

Our Sun itself is a variable star. Its brightness changes by 0.1% over the solar cycle of 11 years.

Discover everything you need to know about variable stars.

Our universe consists of an extraordinary collection of stars. They are so rich in variety and composition that astronomers classified them into special classes to identify them easily.

All stars start out as gas and dust but the different stages and forms that they go through from the beginning of their life to its end is breathtaking.

Most of these star types are visible in our night sky. Which are you going to look for first? 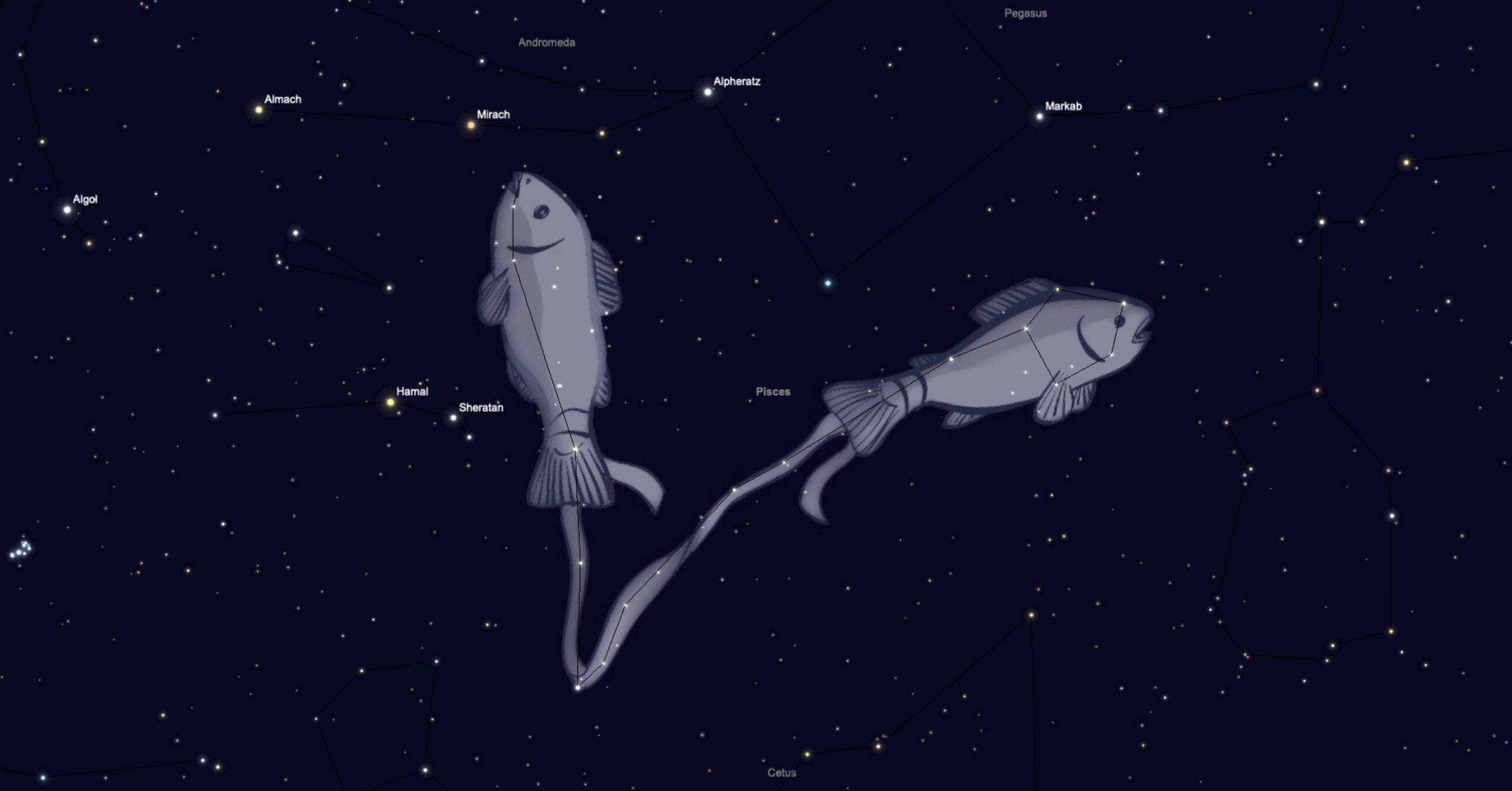 Pisces Constellation – A Guide to the Fishes in the Sky.