How Big is Mars Compared to Earth and Venus?

By Sharmila Kuthunur
|
6 minutes
Home »Astronomy »How Big is Mars Compared to Earth and Venus?

The four planets closest to the Sun—Mercury, Venus, Earth and Mars are called terrestrial planets. They are united by their nature of rocky surfaces and molten iron cores.

This also makes them fundamentally different from the outer planets—Jupiter, Saturn, Neptune and Uranus, which are aptly called the gas giants and are thus not discussed here.

This article will compare the four terrestrial planets of our solar system. We will also learn in detail the ways in which Mars is different to the remaining three in the terrestrial group.

How Large is Mars Compared to the Terrestrial Planets?

If Earth were an empty eggshell cracked open, it would take 6.5 copies of Mars to fill our planet’s volume, assuming they are perfect spheres. That is to say, Earth is significantly larger than Mars, which means we are also more massive.

How Massive are the Terrestrial Planets?

Mars itself has one tenth the mass of Earth and, consequently, exerts a gravitational pull 62% weaker than Earth’s. If a person’s mass is 65 kgs here on Earth, they will weigh 38% x 65 on Mars, which is 24.7 kgs.

For comparison, that same person will weigh 58.9 kgs on Venus and 24.5 on Mercury because the mass of the planet dictates its gravitational pull. Less massive planets have less gravity and objects in lower gravity weigh less.

Note that the person’s mass, which is the amount of matter present inside the body, will remain the same on all planets, it is weight that changes as gravity does.

How Long is a Day on Mars, Earth, Venus, and Mercury?

A day, technically, is the amount of time that passes between seeing the Sun in the same position in the sky. Because each planet rotates at a different speed at varying distances, the length of day is not the same.

For example, Earth’s day is 23 hours 56 minutes. On Venus, which rotates extremely slowly, a day lasts for 116.75 Earth days. Mars turns at a similar rate as Earth. A day on Mars is 24 hours 37 minutes, but it travels at a slower speed than Earth.

And although a year on Mercury is just 88 Earth days, a day lasts for twice that length for about 176 Earth days! If you were to live on Mercury, the day might seem never ending.

How Warm is Mars Compared to Earth?

On Earth, we are used to the average, habitable temperatures of about 14.6℃ or 58.3℉. Mars, however, has an atmosphere that is 100 times thinner than Earth’s and hence cannot retain adequate heat energy that it receives from the Sun.

Due to this, the temperatures change drastically, so much so that if you were to stand on Mars without any protective gear, there would be nearly 15 degrees (in Fahrenheit) difference between your feet and head. A few feet on Mars also make a lot of difference (and is what causes the famous Martian dust storms).

The difference in temperature between Venus and Mars is equally dramatic. Venus is the hottest planet in the solar system and, on average, is more than 500°C hotter than Mars.

What Other Differences Does Mars Have to Earth, Venus & Mercury?

In the table below, we’ve set out some of the key differences between Earth, Mars, Venus and Mercury.

If you would like to know what that feels like on Earth, you will have to travel upwards for 45 km or 27 miles. Venus, due to its thicker atmosphere, has a higher surface pressure of 93 bars. To experience this, you will have to go not up, but underwater to a depth of 3,000 feet!

Mercury, on the other hand, is at the extreme opposite end of the spectrum. Its surface pressure is 0.005 picobar, less than one trillionth of Earth’s.

Highest Point on the Planet’s Surface (and its Height)

There is a big difference on the highest point on each of the terrestrial planets’ surfaces.

Mars is tilted at 25.19° on its axis. This is similar to Earth’s 23.5°, meaning Mars too has four seasons. But, the speed at which Mars orbits the Sun is slower than Earth, which is why its seasons are double the length than here on Earth.

The same is not the case with Mercury; its 2° tilt means it rotates almost upright, leaving no chance for seasons. Similarly, Venus is only titled at 3°, but, even if that weren’t the case, its temperatures are always high due to runaway greenhouse effect, eliminating any seasons.

Moons are either formed from leftover debris from planet formation or captured objects by the planet’s gravity.

The chance for leftover debris is lowest near the Sun and increases as we move outwards. This is why, if you noticed, Mercury and Venus have no moons, Earth has one, and Mars has two. The number of moons increases again with Jupiter and Saturn.

While Mercury, Venus, Earth and Mars are all called terrestrial planets and are fundamentally of the same nature, there are distinct differences in their temperatures, gravity, size, length of day, and more.

Mars is, on average, colder than Earth and, although the length of day is similar for both planets, a Martian year is twice a normal year on Earth due to the red planet’s lower orbital speed.

The axial tilt dictates whether or not a planet will exhibit seasons. Not all planets have moons either; they only start appearing from Earth onwards. 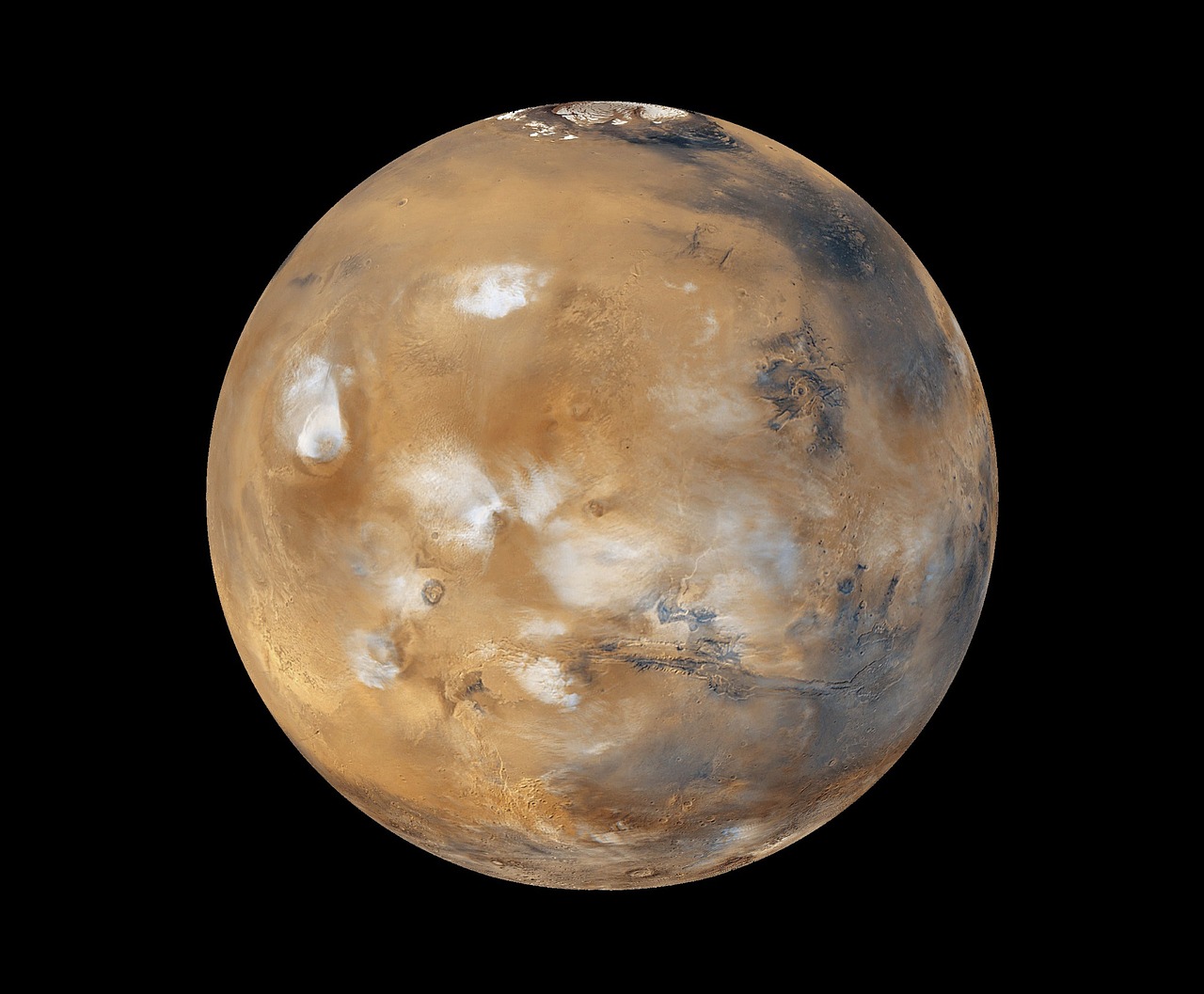 How Long Does Mars Take to Go Around the Sun?