How Far Away Is The Sun From Earth?

By Sharmila Kuthunur
|
6 minutes
Home »Astronomy »How Far Away Is The Sun From Earth?

Our 4.5 billion-year old Sun is the largest object in the solar system, and resides at an average distance of 92 million miles (149 million km) away from Earth. At this distance, light takes 8 minutes 20 seconds to reach Earth.

But that’s just the average distance, we travel around the Sun on an elliptical orbit, so our distance varies over the course of a year, as you’ll read below.

While we’re talking about our year, have you thought about what a solar year is? Or, for that matter, how long is does a day last on the Sun?

(Spoiler alert: if you were to live on the Sun’s surface, the length of your day differs depending on whether you’re at the equator or the poles!)

Let’s find out how and why this happens.

How Far Away is the Sun From Earth?

This average distance from the center of the Sun to the center of Earth is used as a unit of cosmological measurement called the Astronomical Unit (AU). We use the AU to measure distances within our solar system — between planets, for example, Saturn is 7 AU from the Earth.

Our orbit around the Sun is elliptical, which is why the AU represents the average distance over a year. However, there are times when Earth is closer to the Sun and times when it is farther away.

How Long Does It Take to Reach the Sun?

So far, we explored the distance between the Sun and Earth at two important points in Earth’s orbit — perihelion and aphelion. We can now proceed to understand how long it takes to get to the Sun.

There are two ways to go about this. First, we will look at the time light takes to reach Earth from the Sun.

Next, we will board a spaceship (imaginatively, of course) and see how long it’ll take us to travel to the Sun.

How Long Does Light Take to Travel from the Sun to Earth?

Light travels the fastest of all known objects because it has no mass. Its speed is a whopping 186,282 miles per second or 300,000 kilometers per second.

Earth is at a distance of 92.96 million miles from the Sun on average. Thus, light from the Sun takes 499 seconds, or 8 minutes 19 seconds to reach us.

This means that if the Sun were to disappear suddenly, we wouldn’t know about it until at least 8 minutes and 08 seconds later!

How Long Does it Take a Spaceship to Travel to the Sun?

There are many Earth-orbiting spacecraft that are pointed towards the Sun to study it, but only three dedicated solar missions have flown to our star so far.

NASA’s Parker Solar Probe will be the first spacecraft to ‘touch’ the Sun, and it will take 6 years, 4 months, and 13 days to get there.

You’ll notice that there is a big difference in the time taken by these three probes to reach the Sun. This is because the Parker Solar Probe is flying by Venus five times to transfer some of its speed to the planet so that it slows down enough to get into orbit around the Sun.

This shows the difficulty of assessing how long it takes to travel anywhere in the solar system. It is always much quicker to travel directly to and past an object than it is to use planetary slingshots to either speed up or slow down spacecraft.

How Long is a Day on the Sun?

Unlike the planets, the length of a day on the Sun depends on where on its surface you are located.

The Sun is not a solid body, it is made up of gas and plasma, and each layer rotates at a different speed. Scientists track motions of visible features on its surface, such as sunspots, to determine the speeds.

The Sun rotates around its axis once every 27 Earth days, making a solar ‘day’ the same as 27 days here on Earth. However, it’s a little more complex than that. The Sun’s equatorial regions rotate once every 25 days, so if you were to stand on the Sun’s equator, a day would last 25 Earth days.

This time would increase as you move towards the poles because the Sun’s rotational speed is slowest there. If you stood in a polar region of the Sun, a day would last 36 Earth days.

How Long Does the Sun Take to Orbit the Milky Way?

This is effectively the same question as ‘how long is a year on the Sun?’. However, we have to measure the Sun’s year differently from that of a planet.

Our solar system is nestled in the inner edge of an outer spiral of the Milky Way called the Orion Arm, shown in the diagram below.

Our solar system, along with other stars in the galaxy orbits this center. Traveling at a speed of 143 miles per second (230 km per second), our system takes about 225 to 250 million years to complete one orbit, which is called a galactic year.

To put all these numbers into perspective, life began on Earth 16.8 galactic years ago, and 22 galactic years from now, our galaxy and the neighboring Andromeda Galaxy will begin to collide.

Residing at an average distance of 92 million miles (149 million km), the Sun is our reliable source of light each day. Days on the Sun aren’t so straightforward: each of its layers rotates with a different speed, which is why days range from 25 days at the equator to 36 days at the poles.

The Sun itself is not stationary; the entire solar system orbits the center of the Milky Way galaxy every 225 to 250 million Earth years, which is known as one galactic year.

Wouldn’t it be exciting to travel to the Sun? If you do, make sure to pack extra-strong sunglasses to protect yourself from the glare! 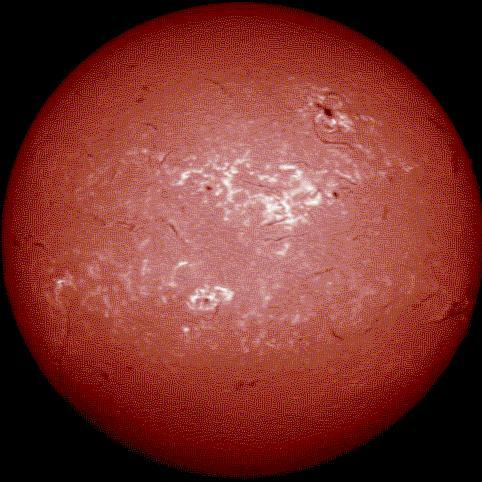 What Is The Sun Made Of, and How Hot Is It?