How Far Away is Uranus From the Sun and Earth?

By Sharmila Kuthunur
|
6 minutes
Home »Astronomy »How Far Away is Uranus From the Sun and Earth?

At this distance from the Sun, what does a day and a year on Uranus look like? And, how long would it take to get there?

How Far Away is Uranus From the Sun?

How Far Away is Uranus From the Earth?

When Uranus is directly behind the Sun (known as a solar conjunction), Uranus, the Sun, and Earth are in alignment with the Sun in the middle. At this point, Uranus is as far away as it can be from Earth, at nearly 1.98 billion miles (3.2 billion km).

As the two planets continue on their orbits, the distance between them shrinks. Eventually, Uranus’s closest approach to Earth occurs when both planets are in line with the Sun but, this time, Earth is between the Sun and Uranus, i.e. Uranus and Earth are on the same side of the Sun.

This moment is known as Uranus’s opposition. It occurs once per year and the distance between Earth and Uranus at that time shrinks to around 1.6 billion miles (2.6 billion km).

When it is closest to Earth, Uranus shines at magnitude 5.7. Although Uranus is brightest and largest at this time, it is not possible to distinguish it from other stars without the aid of a telescope.

How Long Would It Take to Reach Uranus?

Voyager 2 is the only spacecraft that visited Uranus, and it took 9 and a half years to get there. Light, on the other hand, travels to Uranus from Earth in only 2.4 hours when the two planets are at their closest.

So far, in this article, we have learned of the distance from Earth to Uranus at two important points in its orbit — one when the planet is closest and the other when it is the farthest. We can now proceed to understand how long it takes to get to Uranus.

There are two ways to go about this. First, we will look at the time light takes to reach Uranus from Earth.

Next, we will board a spaceship (imaginatively, of course) and see how long it’ll take us to travel to Uranus

How Long Does Light Take to Travel from Uranus to Earth?

Light travels the fastest of all known objects because it has no mass. Its speed is an unimaginable 186,282 miles per second. At this rate, light takes 499 seconds to reach Earth from the Sun.

The average distance between the Earth and Sun is known as an Astronomical Unit. Let’s take a look at the shortest, longest, and the average time for light to travel between the two planets.

At its average distance of 1.7 billion miles (2.5 billion km), light takes 2.5 hours to reach Uranus from Earth. As the planet orbits the Sun, this time varies between 2.38 hours and 2.95 hours.

This also means that when you look at Uranus from a telescope, you are looking at it as it looked at least 2.4 hours ago!

How Long Does it Take a Spaceship to Travel to Uranus?

Only one spacecraft, Voyager 2, has visited Uranus so far. It took 9½ years to get there.

How Long is a Day on Uranus?

Nailing the length of a day boils down to calculating a planet’s rotational speed, which is usually done by measuring the rotational speed of its core. This is harder for ice giants because they have a very small solid core engulfed by icy layers, making it difficult to get accurate measurements.

However we know is sidereal rotation, which measures its rotation with respect to the stars, gives us the figure above. Defining a day by reference to the sun, i.e. the time between the sun reaching its highest point in the sky and returning to it is complicated by the extreme axial tilt of Uranus, which effectively lies on its side.

The impact of this the Sun essentially only returns to the same point in the sky once per year. So, arguably, a day on Uranus is as long as 84 Earth years!

How Long is a Year on Uranus?

Uranus takes 84 Earth years to orbit the Sun. While a day on Uranus is shorter than that on Earth, its year is much longer. This means that Uranus rotates faster than Earth but orbits the Sun slower.

The further out a body is from the Sun, the slower it orbits around it and the further it has to travel to complete one circuit. This is why the giants at the edge of our solar system take so long to complete a single year. Just see how long Neptune takes to orbit the Sun, for example.

Are There Seasons on Uranus?

Uranus is tilted by 97.77 degrees. Its axial tilt combined with its lengthy year leads to extreme seasons on the planet. Each season on Uranus stretches for 21 Earth years.

During summers and winters, only one pole faces the Sun while the other remains in complete darkness.

For spring and fall, Uranus’ day and night shifts every 17 hours. This causes rapid temperature changes and strong winds in its turbulent atmosphere.

Uranus is the seventh planet from the Sun and orbits the star at 1.8 billion miles (2.9 billion km). Its orbit is nearly circular with an eccentricity of just 0.04, which is why there isn’t a significant difference between its closest and furthest distances from the Sun or Earth.

Voyager 2 is the only spacecraft that has visited Uranus so far, and it took 9½ years to get there.

A day on Uranus lasts just 17 hours but a year takes 84 Earth years to complete because Uranus orbits slowly around the Sun and has a vast distance to cover.

This, combined with its axial tilt of 97 degrees, leads to extreme seasons. Each pole faces the Sun for 21 years, leading to 21-year-long summers and winters. 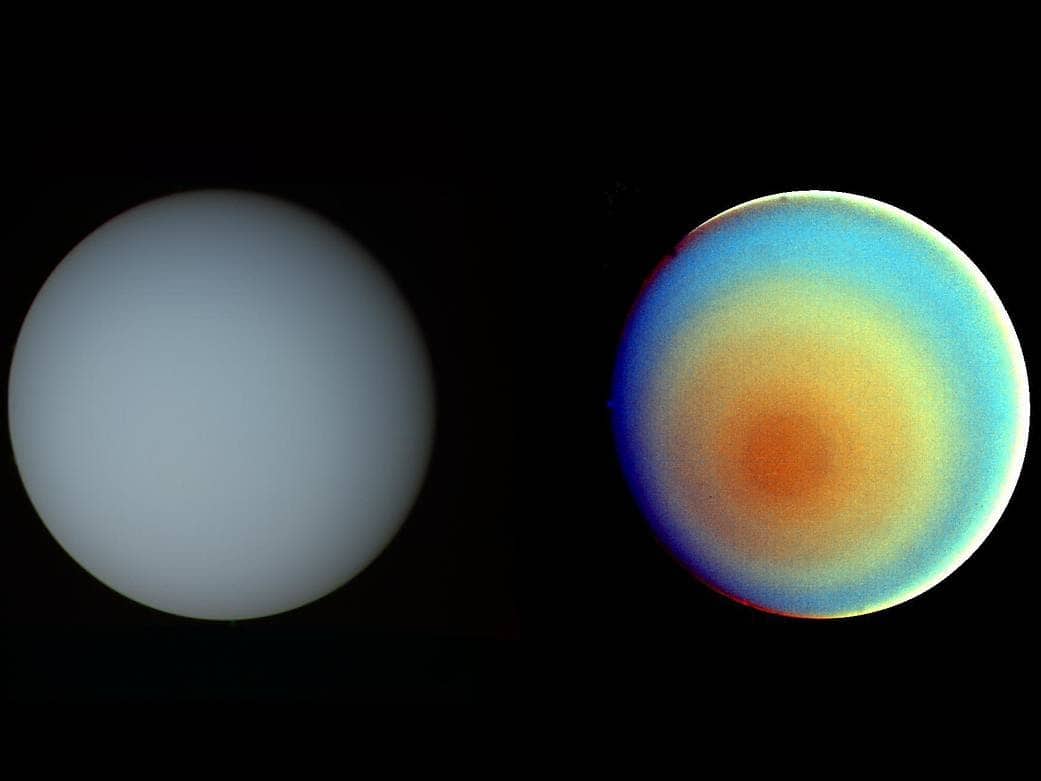 What is Uranus Made of, and is it the Coldest Planet in the Solar System?