How Hot is Mercury, and Does it Have an Atmosphere?

By Adam Kirk
|
5 minutes
Home »Astronomy »How Hot is Mercury, and Does it Have an Atmosphere?

Mercury is the first, fastest, and tiniest planet in our solar system. It orbits just 34 million miles from the Sun and never ventures more than 28 degrees from our star (making it hard for astronomers to observe).

With this information, Mercury might seem like the hottest planet in our system. But surprisingly, it is not the hottest, and parts of its surface are extremely cold.

Mercury receives 4 times as much energy on its surface as Venus and absorbs 9 times the amount of sunlight, why then is it not the hottest planet in the solar system?

What is the Temperature on Mercury?

All planets in our system follow a simple rule: they absorb heat from the Sun during the day and radiate it back into space at night. This is why days are hotter and nights get colder. The speed at which heat escapes into space depends on the planet’s size and the thickness of its atmosphere.

Mercury’s size and the Sun’s fierce and frequent solar winds make it impossible for the tiny planet to hold onto its atmosphere, which is why it is not the hottest planet in our system (first place belongs to Venus).

Mercury gets incredibly hot during the day, as you’d expect, but it loses all of this heat equally quickly at night because it has no useful atmosphere.

This is also the reason we believe there is ice on Mercury. Some craters in Mercury’s polar regions are permanently blocked off from sunlight, primarily because of Mercury’s shallow axial tilt of only 0.034 degrees.

Since sunlight never reaches the bottoms of these craters, they are a truly frigid place, which is why scientists think up to between 100 billion and 1 trillion tons of ice may exist there.

Does the Same Side Always Face the Sun?

Although Mercury is tidally locked to the sun, just like the Moon is to Earth, it doesn’t always have the same side facing the Sun.

Tidal locking usually means a 1:1 resonance, i.e. the body (e.g. Mercury) completes one rotation on its axis in the same time it takes to complete one revolution around another body (e.g. the Sun).

However, detailed studies unveiled that Mercury has a 3:2 resonance, in that it rotates three times on its axis for every two orbits that it makes of the Sun.

In this fashion, Mercury rotates at a low speed of 10.9 km/h, which makes a single day last as long as two years.

Are There Seasons on Mercury?

According to NASA, ‘you can’t even tell when one season ends and the next one begins’ on Mercury. This is because Mercury’s axial tilt is only 0.034 degrees, meaning it rotates almost upright, preventing any seasons like those that occur on Earth (Earth’s axial tilt is 23.5 degrees).

If we stray away from the definition of a season, Mercury’s highly elliptical orbit allows a version of summer and winter. It is always within 28 degrees of the Sun, but when it is closest, at 28.6 million miles (46 million km), daytime temperatures soar to 427°C or 800°F.

Does Mercury Have an Atmosphere?

Mercury has the thinnest atmosphere of all planets in the solar system, with a mass of ~10,000 kg.

Its low gravity as a consequence of its tiny size cannot hold onto its atmosphere as Earth does. Due to this, solar winds routinely erode what little atmosphere Mercury has.

The only reason a very thin atmosphere still exists is that the solar winds whip up particles from Mercury’s outer layer and deposit them onto the atmosphere.

The heavier elements fall back onto the surface while the lighter ones get blown away by the winds, creating a comet-like tail. This way, gases are constantly added to Mercury’s atmosphere.

Hydrogen, helium, and oxygen are present in trace amounts, with even lesser quantities of sodium, potassium, calcium, and magnesium. All in all, Mercury’s atmospheric pressure is less than one-trillionth of Earth’s.

The Cratered Surface of Mercury

Mercury is dotted with craters. These craters were created when meteorites and comets landed onto Mercury’s surface because its very thin atmosphere does not burn incoming projectiles as Earth does.

The craters are formed from two primary sources: asteroid and comet impacts, and those created by landing of ejected material back on the surface. Most of Mercury’s craters are larger than 20 km in diameter, and 412 of them are named, but there are many more.

Unlike Earth, Mercury has no tectonic activity to recycle the surface, so craters remain unaltered for millennia after they are created.

Although Mercury is closest to the Sun, it is not the hottest planet in our system. This is because it has a very thin atmosphere that cannot hold onto the heat the planet receives from the Sun. This is also the reason behind the extreme temperature differences at night and in the day.

With all its quirky features, Mercury is a fascinating planet to learn about and a challenging planet to view. 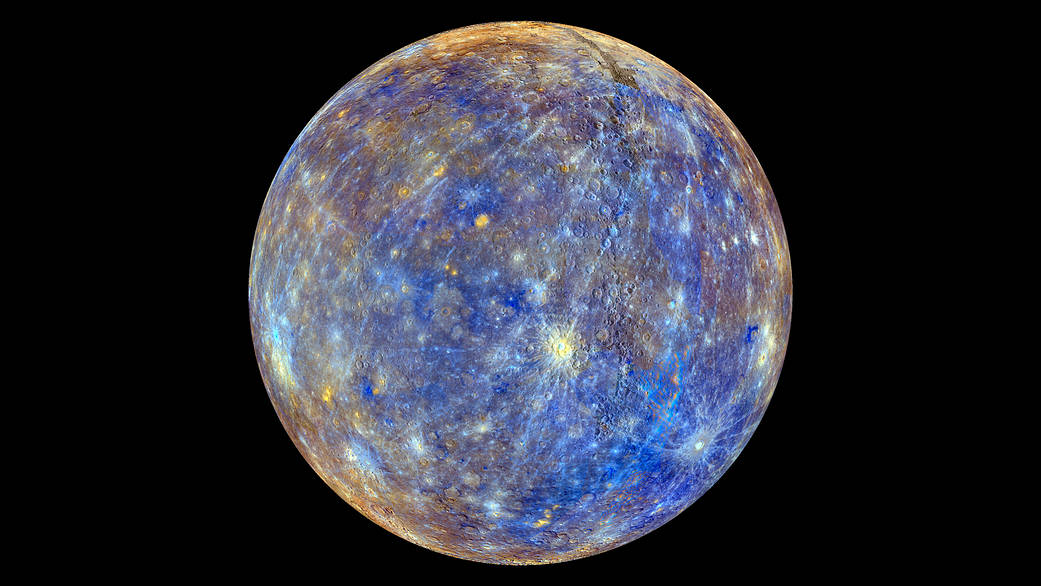 How Far Away is Mercury from the Sun and Earth?