How to Find and Observe Messier 15, an Incredibly Old Cluster

Despite its distance of approximately 34,000 light-years, M15 is visible as a fuzzy spot to the naked eye from dark locations, and quite easy to find with binoculars from suburban skies as it rides high in the southern sky in late summer.

M15 is one of my favorite globular clusters to observe, not only due to its impressive appearance but also due to its unique aspects that astronomers have uncovered.

As you read through this article you will learn how to locate and observe M15 through binoculars and a telescope yourself, and about some of the fascinating characteristics of this swarm of stars.

When Was M15 Discovered and What Do We Know About it?

Below is a high-resolution image of M15 showing the jaw-dropping beauty of this cluster. Like jelly beans in a large jar, how many stars can you count? Note how it gets so dense towards its center that we lose the ability to distinguish individual stars.

Note the presence of many yellow and reddish stars, which is an indication of cooler stars that are further along in their lives.

There’s good reason for this, M15 is one of the oldest globular clusters in the Milky way with an age estimated at 12.6 billion years (give or take a billion)!

This cluster is also notable in that it contains over 110 known variable stars, which is more than all but two other globular clusters, M13 and NGC 5139, better known as Omega Centauri.

Discovered by Jean-Dominique Maraldi in 1746, M15 was noted in Charles Messier’s catalog in 1764. Messier, not one to embellish, wrote “Nebula without a star…it is circular and the center is bright.”

While M15 is certainly circular with a bright center, the NGC description is much more fitting for this object: “Remarkable cluster, very large and bright, irregularly round, very suddenly much brighter in the middle, well resolved into very small stars.”

When is M15 Visible?

This table shows when you can best see M37 from the mid-latitudes of the northern hemisphere. Times given are approximate local times for mid-month using a 24hr clock. Underlined times are during the hours of darkness.

At magnitude 6.2, the “fuzzy star” that is M15 is barely visible to the unaided eye under Bortle 3 skies and is visible in binoculars under Bortle 7 skies.

Through a small telescope, M15 is even visible under Bortle 8 and 9 skies, however, the cluster will be underwhelming under so much artificial light.

Riding much higher in the sky than most of the summertime globular clusters, there is significantly less atmosphere for us to contend with when observing M15. Transparency is notably better when pointing more than 45 degrees above your local horizon, and stars appear more steady than nearer the horizon.

To locate M15, use the charts below, which have been generated using SkySafari 6 astronomy software. You can click on each image for a full-screen version.

The first cart shows where to find M15 on a mid-August evening, stars are shown to magnitude 5.0.

First, face southeast and identify the constellation of Pegasus, notable for its ‘Great Square’ asterism. We’ve marked the Great Square in orange on the star chart.

You will see that M15 sits just a bit west of the magnitude 2.4 star Enif and about ⅔ of the way between the Great Square and the smaller constellation of Delphinus. I mention this as there is another nearby globular in Delphinus that we will visit as a bonus object later.

Use the chart below and using Enif as your guide, move 4 degrees northwest. If you have a Telrad finderscope, you can see from the red circles on the chart that placing Enif on the outer circle will result in M15 on the opposite edge.

The blue circle is a 5° field of view and represents the area that a regular magnifying finderscope will show you. Again, if you have Enif at the southeastern edge, you’ll see M15 in the northwest.

Even without a Telrad or magnifying finderscope, using your binoculars or telescope it is a simple star hop to M15.

Most binoculars have a field of view greater than 4 degrees, and a telescope at low power with a large field of view will only require nudging two or three fields depending on your equipment.

Now you’ve learned where and how to find M15, what can you expect to see of it in your telescope?

M15 Through a Telescope

M15 is easily visible in astronomy binoculars, as a fuzzy, or out-of-focus star. At magnitude 6.2, it is well within reach of even smaller binoculars and I have seen it in my 8.5 x 21 pair.

Do not expect to resolve any of the stars of this cluster in binoculars, as the cluster is quite condensed and its brightest stars are approximately magnitude 12.6.

Through a small telescope, M15 begins to reveal its majesty.

You should immediately note how quickly the cluster brightens in the center – the density of stars in the core of the cluster is the defining feature of M15.

M15 is referred to as a “core collapsed” globular cluster and astronomers have long suspected a black hole at M15’s center. Using the Hubble Space Telescope, astronomers have found evidence that may indicate an ‘intermediate mass’ black hole, about 4,000 times the mass of the Sun, resides there, although this remains an open question.

One aspect of observing through my 76mm refractor that I always enjoy is working to appreciate the subtle color differences of stars. Take some time and see if you can notice any variation in the colors of stars near the periphery of M15.

This is quite a challenge for me with M15, given the density of the cluster and the fact that the stars are generally faint. Can you detect any variations in color?

Large telescopes open up M15 even further. In my 12.5-inch Dobsonian, for example, I notice that the bright core of M15 is slightly out of round, or not perfectly symmetrical.

As you observe, take some time and note what appears to be a very straight chain of stars on the northeast side of the cluster.

Some observers report using averted vision and being able to detect dark patches in the outer shell of the cluster. These are challenging for me, except where they’re right alongside the aforementioned chain of stars.

Lastly, can you spot an arc of ‘brighter’ stars on the east side of the core?

Our Best Telescopes for Seeing Clusters in 2023

Do you have a very large telescope? If so, here is a challenge: M15 is home to the planetary nebula Pease 1.

Discovered in 1928, it was the first planetary nebula discovered in a globular cluster, and to date, there are only a few others known. Pease 1 is a very difficult target, one that I have not yet convincingly observed, despite spending a bit of time with a 20-inch telescope and an OIII filter under pristine skies.

I think I saw it, but as the joke goes, it could have been my averted imagination. Phil Harrington published an article and finder chart for this challenge which can be found on Cloudy Nights.

Using the chart below, you can see that if you move 2° slightly northwest of M15, you will come to NGC 7006 in the constellation of Delphinus.

In small instruments, you may mistake it for a fuzzy star or a faint comet, and even in larger telescopes, it retains its cometary appearance. The reason for this is that NGC 7066 is one of the furthest globulars from us, at approximately 135,000 light-years away. That is 4 times further than M15!

M15 is one of the oldest and largest globular clusters in the night sky.

It is near the arms of Pegasus, making it straightforward to find. Its bright globe of 100,000 stars is a joy to behold on a summer evening, no matter whether you’re enjoying it with binoculars or a large backyard telescope. 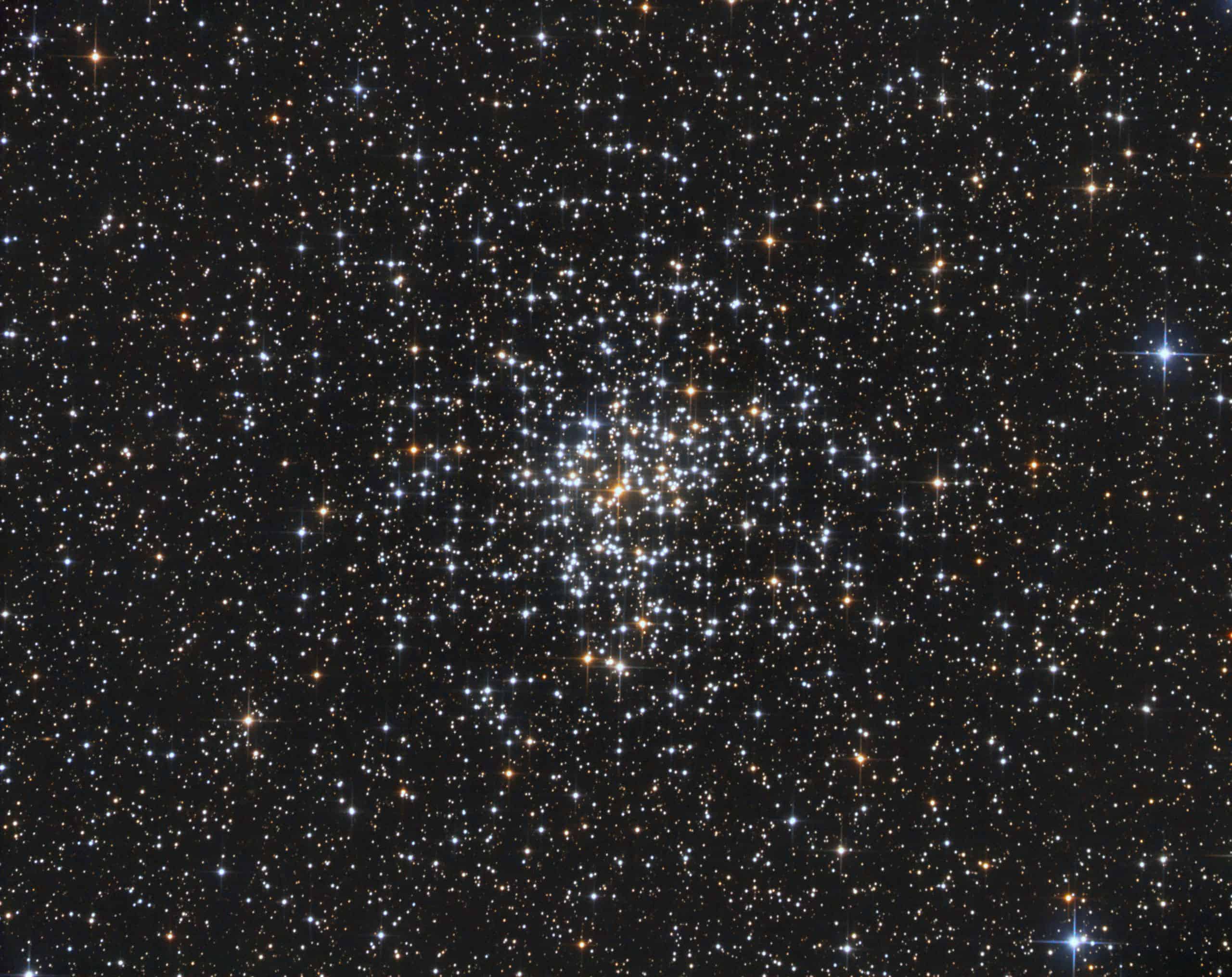 How to Find and Observe Open Cluster M37