How to Find and Observe Open Cluster M37

The cold winter nights offer many dazzling open clusters to warm an astronomer’s soul, including M46 in Puppis and the startlingly beautiful NGC 2362 in Canis Major, but M37 might just be the best of the lot.

In this article, I’ll show you how to find and observe this wonderfully star-rich cluster: an exotic beetle with a jeweled heart.

When Was M37 Discovered and What Do We Know About it?

Also known as the Salt & Pepper Cluster, the first recorded observation of M37 appears in a 1654 publication by the Italian astronomer Giovanni Hodierna, who was using a small Galilean refractor. Unfortunately, his observations of this and other objects (including M36 and M38) received little attention outside Sicily and so his achievements remained largely unknown until as recently as 1985.

The cluster was independently rediscovered by Charles Messier on 2 September 1764, the same night he observed M36. Messier compared the two clusters in his description, noting that the stars of M37 are “fainter, closer together, and contain some nebulosity” (this of course refers to unresolved stars rather than true nebulosity).

Modern surveys suggest that M37 contains approximately 2,000 members in a volume 33 light-years across. This makes it one of the larger open clusters in the Messier catalog, comparable in size to a small globular cluster like M4.

This richness of stars has kept its members gravitationally bound longer than most open clusters (with an age of somewhere between 350 and 500 million years, it’s also one of the more mature open clusters in the Messier catalog), but eventually they too will disperse and go their separate ways.

The distance to M37 is estimated to be 4,500 light-years, approximately ten times farther away than the Pleiades.

When is M37 Visible?

This table shows when you can best see M37 from the mid-latitudes of the northern hemisphere. Times given are approximate local times for mid-month using a 24hr clock. Underlined times are during the hours of darkness.

M37 is best observed during the winter months from November through to February.

How Hard is M37 to Observe?

From my Bortle 5/6 backyard, M37 is a relatively easy object through any aperture. At low magnifications, its closely-packed stars may be difficult to resolve, particularly when viewed from more light-polluted locations.

Under exceptional skies, M37 may be visible to the naked eye.

M37 resides within the constellation of Auriga, the Charioteer, a distinctive pentagon-shaped arrangement dominated by the brilliant magnitude 0.08 Capella, the sixth-brightest star in the night sky.

This first SkySafari 6 star chart shows M37’s location at 9pm on a mid-December evening. The cluster is shown orange and clicking the image will open a full-screen version. Stars are shown to magnitude 5.0.

Auriga is a fixture of the winter sky, riding high above the unmistakable outline of Orion (to its north). We also see Castor and Pollux in Gemini to its east and the horns of Taurus to the southwest.

It’s no coincidence that the three Messier clusters in Auriga (as well as M35 in Gemini) are strung out in a loose line. The Milky Way passes through these constellations, making it a rich hunting ground for clusters and nebulae.

It’s worth noting that Elnath, the southernmost member of Auriga’s “pentagon”, doesn’t actually belong to Auriga. Beta Tauri (as it is now formally known) used to be shared by both Auriga and Taurus until the constellation boundaries were more rigorously defined in 1930 (although most star atlases retain the connecting lines for ease of identification).

M37 lies just outside the pentagon, forming a flattened isosceles triangle with Theta Aurigae and Beta Tauri, as shown with the orange arrows in the above star chart. The cluster is 3.7 degrees east-southeast of M36.

This final chart shows the cluster in more detail and its relationship to Theta Aurigae, M36, and Elnath, utilizing the Telrad finder rings.

If this still seems like a large area in which to look for a deep-sky object, don’t worry; M37 is prominent enough that a casual sweep with binoculars or a finderscope will easily pick it up, showing it as an obvious misty patch of unresolved starlight.

M37 through a Telescope

In terms of apparent size and total brightness, the three Auriga Messier clusters are similar to each other, but telescopically M37 is the stand-out member of the trio.

Your own tastes may vary, but I even prefer it to the next Messier cluster a little farther along the Milky Way in Gemini: the big, bright, and splashy M35.

Even a relatively small telescope will resolve well over a hundred stars in M37. In my 4-inch refractor at 42x, it looks more like a loose globular cluster than an open cluster.

A dark lane appears to slice through M37, making the eastern corner look as if it has broken off from the rest of the cluster.

An increase in aperture reveals even more stars in M37, showing a profusion of fainter members surrounding the triangular core of the cluster. The most prominent star – a 9th magnitude red giant – sits at M37’s heart.

A wide-field eyepiece shows the bright 6th magnitude star V440 Aurigae half a degree southwest of M37, its strong orange-red hue providing a subtle contrast with the pale red star at the center of the cluster.

Like many Messier open clusters, M37 is best seen at low-to-medium powers. In my 10-inch reflector at 50x and 92x, the cluster resolves into dense clumps of stars separated by dark rifts – not unlike its summer counterpart M11, the spectacular Wild Duck Cluster.

However, unlike M11’s somewhat “fractured” appearance, M37 has an aesthetically-pleasing symmetry about it which makes it appear more orderly to my eye.

Contemporary observer and author Stephen J. O’Meara is well known for “joining the dots” in star clusters to perceive all sorts of fantastical shapes and creatures, and – I have to admit – I often struggle to see the things he sees. But when it comes to M37, we’re both very much on the same page. The dark lanes and the trailing lines of stars on either side of the cluster combine to form a distinctive insect shape, like a beetle scuttling along the Milky Way.

The effect tends to be lost in photographs, but I find it rather obvious through the eyepiece. If you don’t see it at first, just relax your mind and give the cluster time to “present itself” to you; once you see the beetle shape, it’s impossible to “un-see” it.

One other note: if you’ve used one of the popular star-atlases (such as Sky & Telescope’s Pocket Sky Atlas) to find M37, you may have noticed the outline of a distinctive – and very large – nebula straddling the Auriga-Taurus boundary 5 degrees to the south.

This is the supernova remnant Simeis 147 (aka Sharpless 2-240, aka the Spaghetti Nebula); it’s a popular target for astrophotographers, but as far as visual observing goes, it’s one of the faintest and most challenging objects out there. Good luck if you attempt it – but don’t be too disappointed if you don’t see anything.

The Messier catalog is not lacking in open clusters to observe, but hopefully, you’ll agree that M37 ranks among the best of them.

Have you seen M37 through your telescope? How do you think it compares to other open clusters? Let us know in the comments below. 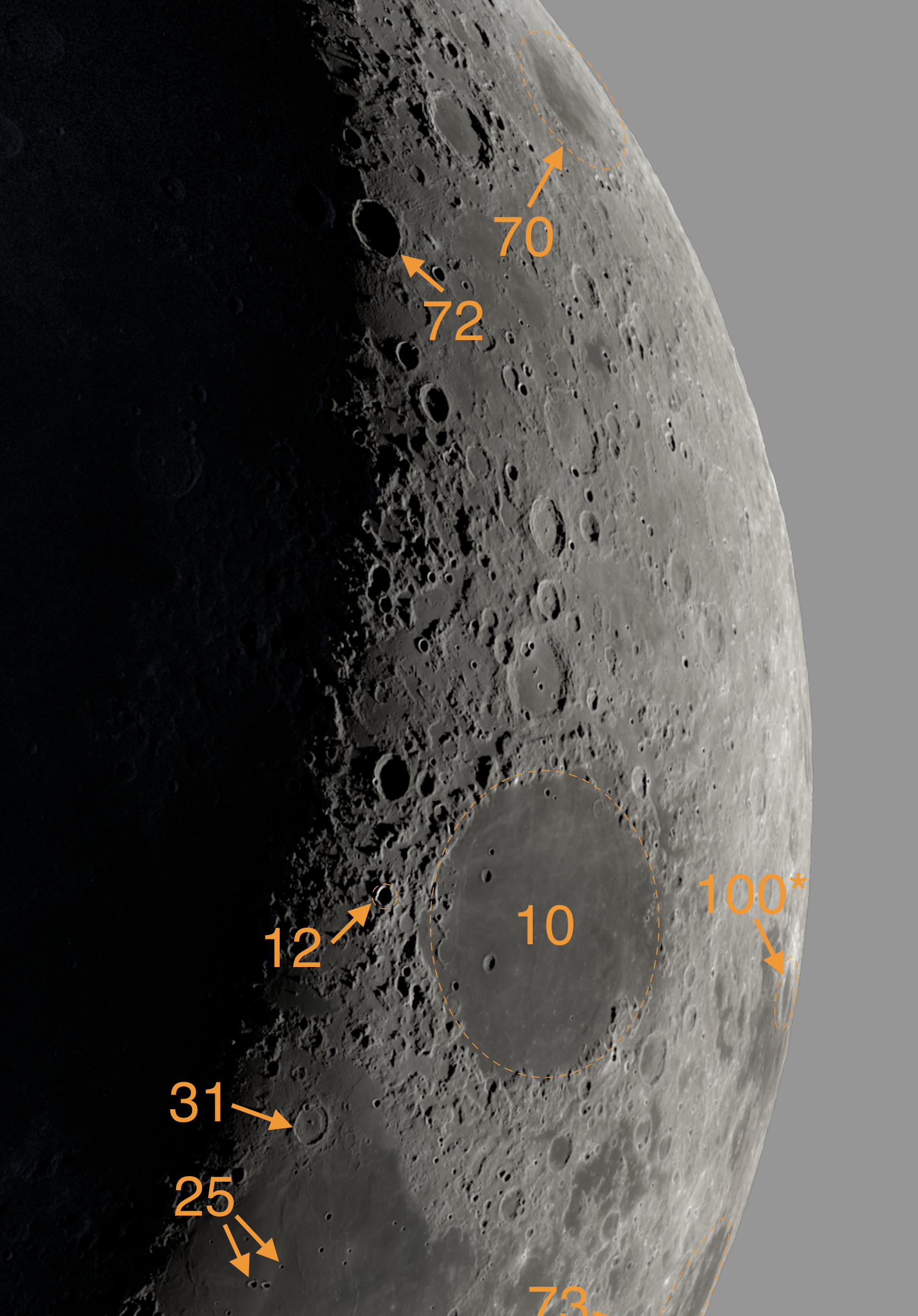 The Lunar 100, An Astronomer’s Guide