How to Find and Observe Globular Cluster M72

On first impression, M72 doesn’t seem to have a lot going for it.

It’s the faintest of the 29 globular clusters in Messier’s catalog, paling in comparison to the more impressive M2 and M15 to the north.

But don’t be too quick to dismiss M72!

Not only is it an interesting object in its own right, but it also serves as the starting point for a mini deep-sky tour that includes a mysterious asterism and the most “planetary” of planetary nebulae.

See our Astronomy Formulas page for advice on how to calculate the stellar limiting magnitude for your telescope.

When Was M72 Discovered and What Do We Know About it?

M72 was discovered by Charles Messier’s colleague Pierre Méchain in August 1780. He reported his finding to Messier, who observed it in October that same year.

Both men logged it as a nebula; the cluster’s true nature became apparent three years later when William Herschel observed it with a larger telescope.

M72 is 100 light-years across, with a mass of no more than 200,000 solar masses. It’s one of the more distant globular clusters in the Messier catalog, lying on the other side of the galactic core as seen from Earth.

Its retrograde orbit indicates it may have been captured during a close encounter with a companion galaxy.

When is M72 Visible?

This table shows when you can best see M72 from the mid-latitudes of the northern hemisphere. Times given are approximate local times for mid-month using a 24hr clock. Underlined times are during the hours of darkness.

M72 is best seen during the latter half of the year, particularly during August and September.

M72’s low surface brightness makes it a potentially challenging target for urban observers. From my suburban location (Bortle 5 / 6) in southern England, it’s not too difficult telescopically, but I haven’t been able to see it through binoculars.

M72 resides in Aquarius, the Water Bearer. This is a large constellation with a paucity of bright stars that can make it hard to navigate, but fortunately, we can star-hop to M72 using the neighboring constellation of Capricornus (The Sea-Goat) as a guide.

All of the star charts on this page are generated in SkySafari 6. Each can be clicked on to open a full-screen version.

This first chart shows the position of M72 at 10pm in the middle of September. Stars are shown to magnitude 5.0.

Our route begins with Altair, the southernmost star in the Summer Triangle asterism, and the brightest star in the constellation of Aquila, the Eagle.

Trace an imaginary line through Altair and the two stars that flank it, and extend this line south until you reach the 3rd magnitude star Theta Aquilae.

Keep going south roughly the same distance again until you arrive at the pairing of Alpha and Beta Capricorni. You may notice that Alpha Capricorni is a nice optical double, with the two 4th magnitude stars separated by about 6.6 arcminutes.

M72 lies at the same declination as Alpha Capricorni, so if you’re using an equatorial mount you can simply move the scope 10 degrees east until M72 enters the field of view.

Otherwise, use your finder to locate 3.8 magnitude Epsilon Aquarii (Albali). M72 is about 3 degrees southeast of this star, as shown in the final star map below, which also shows stars to magnitude 8.0.

M72 can be tricky to spot in a finderscope, but fortunately, a 9th magnitude star lies just 5 arcminutes east of it. Aim at that and the cluster should be visible in your telescope’s eyepiece.

M72 through a Telescope

There’s no getting around it: M72 is an object that really only starts to look good in apertures of 8 inches or more. A small scope can give a sense of its looseness, particularly when compared to other globulars like M15 in Pegasus, but otherwise, you’ll do well to see anything more than a soft round glow.

At medium power (90x to 150x) in my 10-inch reflector, M72 appears as a grainy round ball of light that brightens towards the center, with two bright field stars a few arcminutes to the east (including the 9th magnitude star mentioned earlier). Two faint stars lie just southeast of the cluster, with an even fainter one to the northeast.

When viewed with averted vision at 171x, the cluster starts to take on a speckly appearance, hinting at its starry nature. The core seems to have a triangular shape, pointing west. This effect is enhanced by what appears to be a dark lane just east of the core.

At 240x I can just make out a few additional pinpricks of light winking in and out of view, but this is right on the limit of what I can see. Observers with larger scopes and darker skies may fare better with this challenging but rewarding cluster.

When you’ve finished observing M72, nudge your telescope 1.5 degrees east to find one of the more contentious objects in the Messier catalog.

Discovered by Messier while he was following up Méchain’s observation of M72, M73 is a little Y-shaped pattern of four stars, with magnitudes ranging from 10.5 to 11.9.

Messier’s impression of underlying nebulosity (suggesting unresolved stars) can be easily disproved with just about any modern telescope at medium to high magnification, but it wasn’t until as recently as 2002 that astronomers were able to definitively rule out any physical association between the four stars. M73 is just an asterism: a chance alignment of stars at distances ranging from 1,000 to 3,000 light-years.

Before you leave M73 behind, take a closer look at the 10th magnitude star 12 arcminutes to its west (M73 is helpfully pointing at it). It’s a double star, with north-south components separated by just under 3 arcseconds. I can barely split it at 171x, but it’s a little easier at 240x.

Discovered by William Herschel in 1782, planetary nebula NGC 7009 is brighter than both M72 and M73 (though it would have appeared star-like in Messier’s telescope). You can find it two degrees northeast of M73 and 1.25 degrees west of magnitude 4.5 Nu Aquarii. It is marked in yellow on the last star chart, above.

In contemporary scopes, NGC 7009 stands out as a little aquamarine ellipse of light, elongated along an east-west axis. At 171x I can just make out a hint of the faint ansae (the projections that give it its name) with averted vision, though I doubt I would have noticed these features if I hadn’t already known they were there.

Don’t be afraid to use your highest magnification on NGC 7009 if the seeing is good; at magnitude 8.3 it holds its brightness well at high power even without a nebula filter and is a fine target even in urban skies.

Hopefully, this article has inspired you to visit this trio of treasures in the western corner of Aquarius. Have you seen M72 and its two neighbors, and if so, what did you think of them? Let us know in the comments below. 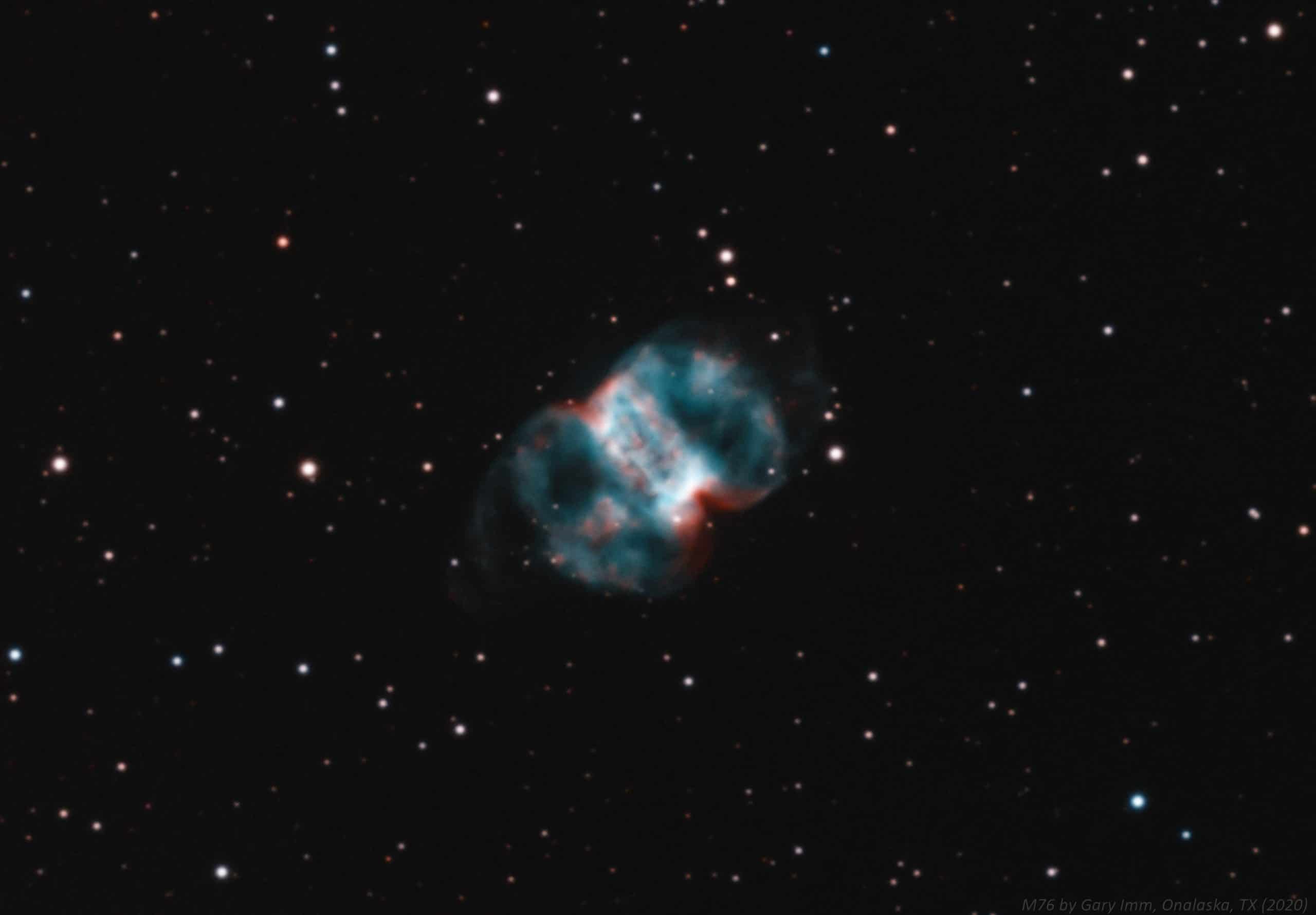 How to Find and Observe The Little Dumbbell Nebula, M76