How to Find and Observe The Little Dumbbell Nebula, M76

By Mark Kilner
|
7 minutes
Home »Astronomy »How to Find and Observe The Little Dumbbell Nebula, M76

M76, the Little Dumbbell Nebula, has an undeserved reputation for being one of the most difficult Messier objects to discover from our own backyard.

In this article, I’ll show you how to find and observe this beautiful little planetary nebula: a treat for both large and small telescopes.

When Was M76 Discovered and What Do We Know About it?

M76 was discovered in September 1780 by Pierre Méchain who described it as a “small and faint nebula” containing “no stars”. He reported his finding to Charles Messier who observed it the following month.

Curiously, Messier had a very different impression, writing that it consisted of “nothing but very small stars”.

Seven years later William Herschel observed M76 with a superior telescope and saw “two nebulae close together”, which later resulted in it being given two separate entries (650 and 651) in the New General Catalogue.

In 1891 Welsh astronomer Isaac Roberts took the first photograph of M76 and correctly surmised that it could be a similar object to M57 (the Ring Nebula), but seen side-on.

Today we recognize M76 as one of the finest examples of a bipolar planetary nebula, an expanding shell of gas ionized by ultraviolet radiation from the intensely hot core of a dying star.

Deep-exposure images of M76, like that captured by Gary Imm, above, reveal two bubbles perpendicular to the bright central torus, material that was most likely cast off from the central star when it was still in the red giant stage of its evolution.

Assuming a distance of 5,600 light-years (estimates of its distance vary wildly), M76 is approximately 1.23 light-years across on its longest axis, with the faint outer halo extending that to nearly 4 light-years (comparable to the distance between our Sun and the next nearest star Proxima Centauri).

When is M76 Visible?

This table shows when you can best see M76 from the mid-latitudes of the northern hemisphere. Times given are approximate local times for mid-month using a 24hr clock. Underlined times are during the hours of darkness.

Due to its high northerly declination, M76 is always above the horizon for most observers in the northern hemisphere, and thus there are no rise or set times in the table above.

That said, if you want to observe it at a decent elevation (and at a decent time of night), M76 is particularly favorable from October through to January.

Although M76 is not as difficult to see as some sources would have you believe, it might prove too faint for observers using small telescopes under light-polluted urban skies.

It is also a small object (roughly 2 arcminutes across), so don’t expect it to be as obvious in your scope as the other, more famous Dumbbell (M27) or the Ring Nebula (M57).

How to Find M76, The Little Dumbbell Nebula

M76 lies within the constellation of Perseus, the Hero, but I find the easiest way to get to it is to use the stars of Andromeda and Cassiopeia as a guide.

The first finder chart, from SkySafari 6, shows the location of M76 (in green) high above the northeast horizon at 9pm on a mid-November evening. All the star maps on this page can be clicked on for full-screen versions.

If you’ve read my article on the open cluster M52, you should already be familiar with the distinctive constellation of Cassiopeia, and the two stars on the western, or right-hand side of the “W”, Alpha (Schedar) and Beta (Caph) Cassiopeiae.

Remember how we extended an imaginary line through those two stars to find M52? This time, we’re going to extend the line in the opposite direction towards magnitude 2.3 Gamma Andromedae (Almach). (Make a note of this star – we’ll be coming back to it later.)

About 60 percent of the way along this line you’ll arrive at the magnitude 3.5 star Upsilon Persei (51 And.).

From Upsilon Persei, hop 2 degrees north-northeast to the 4th magnitude star Phi Persei, as highlighted in the zoomed-in star map below.

M76 lies just one degree north of Phi Persei, but don’t expect to see the nebula in your finderscope (or even a pair of binoculars). Instead, look for an orange-hued 7th magnitude star in the same field.

Center this star in your finderscope and M76 should be visible in the eyepiece of your primary telescope.

M76 through a Telescope

The Little Dumbbell of course takes its nickname from its resemblance to the larger and brighter M27 in Vulpecula, but M76 is a visually interesting object in its own right.

Low-to-medium powers are useful for tracking it down (it will appear as a fuzzy star) but switch to higher magnifications to draw out the subtle detail this nebula has to offer.

In my 4-inch refractor at 111x, M76 is a distinctive peanut-shaped nebula (compared to the characteristic “apple-core” of M27), with one lobe noticeably brighter and fatter than the other.

Another way of visualizing it is as an hourglass with the sand flowing into one side. A narrowband filter helps to improve contrast, particularly when the viewing conditions are less than optimal.

In my 10-inch reflector at 133x, M76 is unmistakable as a double-lobed nebula with the long axis aligned northeast to southwest. The southwestern lobe is clearly the brighter of the two.

A strikingly orange 7th magnitude star shares the same field 12 arcminutes to the east, but any color within the nebula itself is subtle: a light greenish hue at best.

Another field star lies just west of the nebula, with another one to the northwest, and two more in a line farther out on the eastern side.

Prolonged averted vision with a narrowband or OIII filter starts to reveal the faint loops extending from either side of the main nebula. I find the northern one a little easier to see, but it appears patchy and discontinuous.

On one occasion while looking at M76 with an OIII filter, I thought it seemed vaguely reminiscent of the famous Hubble image of the Homunculus Nebula surrounding Eta Carinae (although that nebula is the result of a dramatically more violent outburst from a substantially more massive star).

M76 holds its brightness well at 240x, but it loses what little color it had at lower magnifications. At this power, the brighter lobe appears almost rectangular. Careful examination suggests one or two knots or condensations within this lobe, one of which I suspect is a 13th magnitude field star. The 17th magnitude central star is of course far too faint for my scope (and indeed most amateur telescopes; I’m not aware of any successful sightings).

When you’ve finished looking at M76, don’t forget to pay a visit to Almach (Gamma Andromedae). Even if you have only a passing interest in double stars, this is one of the most beautiful stellar couplets you can see through a telescope, rivaling Albireo in Cygnus. A moderate or high-power eyepiece reveals a 2nd magnitude golden primary and a 5th magnitude indigo-blue secondary, separated by roughly 10 arcseconds.

Hopefully, this article has convinced you that M76 is well worth some of your precious observing time, regardless of how large or small your telescope is. Have you seen it, and were you able to make out the double-lobed structure? Let us know in the comments below. 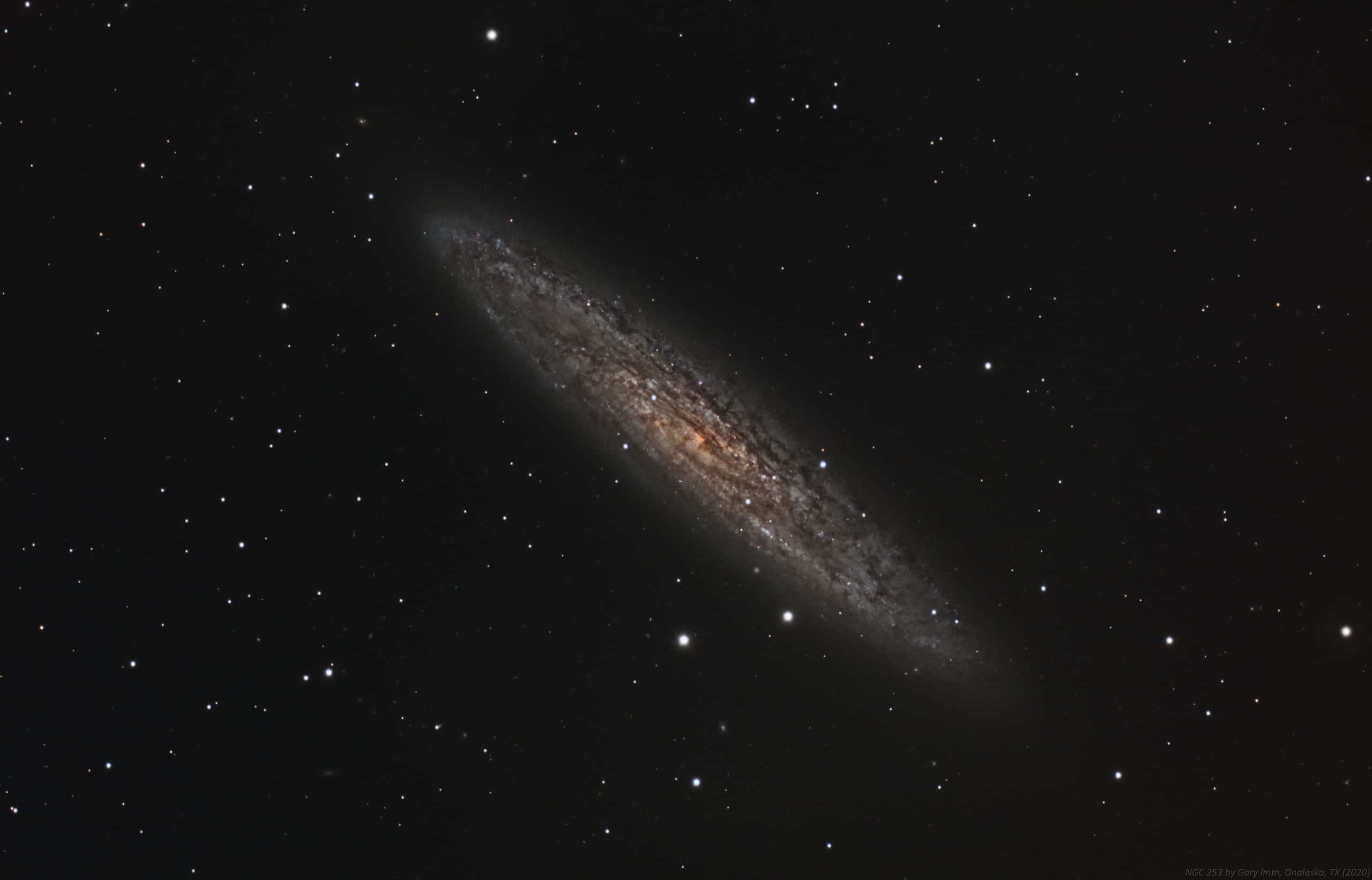 How to Find and Observe NGC 253, The Sculptor Galaxy