How to Find and Observe NGC 253, The Sculptor Galaxy

By Dr. Alan Strauss
|
7 minutes
Home »Astronomy »How to Find and Observe NGC 253, The Sculptor Galaxy

NGC 253, also known as the Sculptor Galaxy (and Caldwell 65), is one of the brightest galaxies available to amateur astronomers in the night sky.

Approximately four times further than the Andromeda Galaxy, at 11.5 million light-years away, this galaxy appears remarkably bright in the eyepiece and, to a patient observer with a medium to large telescope, will reveal extensive amounts of dust.

In this article, I’ll show you how to discover and observe this distant beacon of light for yourself.

When Was NGC 253 Discovered and What Do We Know About it?

This galaxy is so bright, it would have surely been included in Messier’s catalog if it had a more northern declination. Credit for the discovery of this galaxy is attributed to Caroline Herschel in 1783.

Like M31 it is visible in binoculars and following this guide you will be able to locate and observe this spiral galaxy yourself.

NGC 253 is a spiral galaxy evidencing extensive amounts of star birth in its disc. Astronomers refer to this type of galaxy as a ‘starburst’ galaxy. Numerous and extensive dusty patches have been noted by astronomers since the first observations, and you will see them as well.

Indeed, John Herschel observed NGC 253 with an 18-inch reflector and wrote “very bright and large (24′ in length); a superb object… Its light is somewhat streaky, but I see no stars in it except 4 large and one very small one, and these seem not to belong to it, there being many near…”

The extensive dust is only one sign of the intense activity within NGC 253. Similar to M82, this galaxy has been studied extensively by both ground and space-based telescopes. Astronomers have not only identified evidence of massive bursts of star formation in the nucleus in optical wavelengths but also in other wavelengths such as the mid-infrared and radio.

This table shows when you can best see NGC 253 from the mid-latitudes of the northern hemisphere. Times given are approximate local times for mid-month using a 24hr clock. Underlined times are during the hours of darkness.

At magnitude 8, NGC 253 is faintly visible in binoculars under Bortle 5 skies. Through a small telescope, it is even visible under Bortle 7 skies, however, the galaxy will be faint with little detail under this amount of artificial light.

From my location in southern Arizona, NGC 253 never rises higher than 32 degrees in the southern sky. As a result, I observe this galaxy when I am at a location with an unobstructed southern horizon and south of the city whenever possible.

I recommend that you seek out a location with as dark a southern sky as possible to appreciate all this galaxy has to offer.

To locate NGC 253, use the star maps from SkySafari 6 provided below. Each of the charts is clickable for a full-screen version.

First, try and observe this galaxy when it is near the meridian in the South. The image below shows that position at 9pm in the middle of November. From mid-US latitudes, the galaxy will be 25° over the horizon.

Use these hand shapes to measure degrees easily.

Note the relatively bright star Fomalhaut at magnitude 1.5 in the Southwest, and second magnitude Beta Ceti, more commonly known as Diphda or Deneb Kaitos (as shown in the chart).

In the next chart, you can see the Telrad circles in red and a 5° magnifying finderscope field of view in blue. Note the location of our target relative to the two bright stars mentioned above, i.e. Beta Ceti and Fomalhaut.

NGC 253 sits 7.3 degrees south and slightly east of Deneb Kaitos. The outer circles of the Telrad are 4 degrees in diameter, so it is essentially a two-Telrad star-hop to locate this bright galaxy.

It is relatively easy to locate through an optical finderscope, binoculars, or in the eyepiece of your telescope at low power so that you get a wider field of view.

You may have noticed a fuzzy star in the southeast quadrant of the Telrad circles on the chart above – and zooming in a little further you will see that this fuzzy spot is a bonus object, the globular cluster NGC 288.

The star chart below shows where it is in relation to our galaxy and I’ll discuss it more in the next section.

With both objects now in our eyepiece, what should we expect to observe?

NGC 253 Through a Telescope

NGC 253 is easily visible in binoculars, as a fuzzy elongated patch. While slightly smaller and fainter, it should immediately appear similar to the Andromeda Galaxy M31 and is often considered one of the easiest galaxies to observe.

If you are under a dark sky, try and spot the bonus object, NGC 288, in the same binocular field of view.

NGC 288 is a 9th magnitude globular cluster, whose member stars are not tightly condensed. It is most notable for appearing only 37 arcminutes from the South Galactic Pole in our sky.

Through a small telescope, NGC 253 will even further resemble the Andromeda Galaxy. Like M31, it is neither face-on nor edge-on, rather it is tipped toward us, enhancing the elongated appearance.

You should quickly note the bright core of the galaxy, and as you spend time observing, try and appreciate the fainter extensions of the galactic disc. You will see that the brighter portion of the core appears to be off-center. As you increase the magnification, you will start to notice the patches of dust, giving NGC a highly mottled appearance.

If you are at a dark sky site, try using very high magnifications on this galaxy and you may be surprised at the detail you can discern. The dark patches and lanes permeate the entire galaxy, to the extent that even sketching them would be a challenge.

If you are a suburban astronomer and you have a contrast-enhancing or light pollution filter (not an OIII) try using it and see what you think. I find that there is no magic formula for using these filters with much depending on your local conditions, observing experience, and personal preferences.

In my 12.5-inch Dobsonian, I note extensive mottling throughout the galactic disc, and even into the fainter halo. As you relax and become more familiar with the image in the eyepiece, you will note several faint 12th and 13th magnitude stars superimposed on the galaxy.

As you may have expected, these are the spiral arms of the galaxy, and they are rather challenging observations. I suspect that the dark dust lanes of the galaxy are equally helpful in outlining these structures as the glowing arms themselves.

There is simply so much dust throughout the galaxy that its spiral shape is elusive… Elusive, but detectable!

Lastly, take a look at NGC 288 in your telescope.

NGC 288 glows at magnitude 8 and appears small and not well condensed, regardless of the telescope.

This loose globular is 29,000 light-years from Earth, and approximately 10.5 billion years old. You should be able to resolve this cluster to its core. Below is an image of NGC 288 Taken through the Hubble Space Telescope.

I hope you enjoyed using this guide to locate and observe NGC 253. Like Andromeda, it is a galaxy I return to year after year and I hope that you will as well. 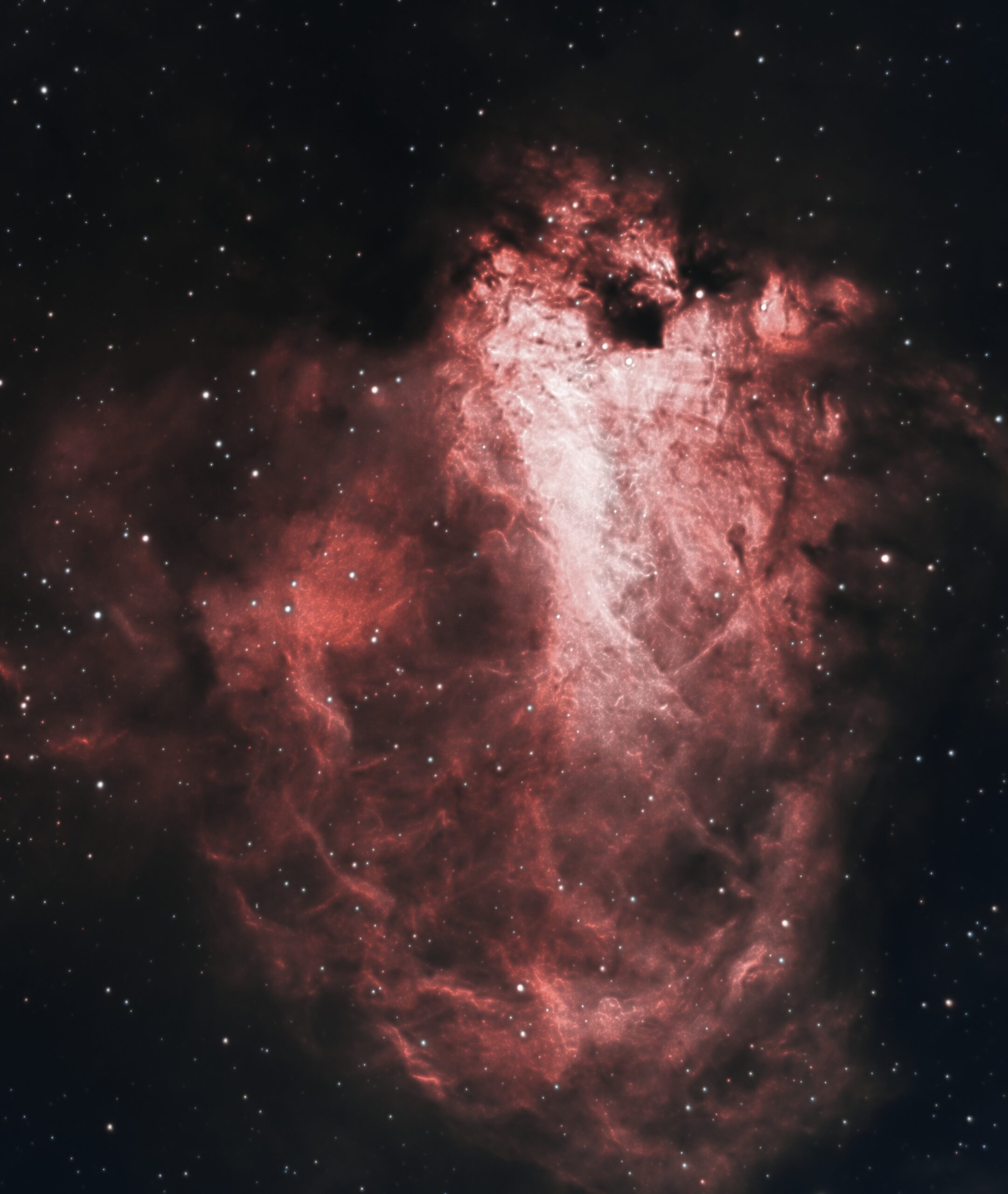 How to Find and Observe Messier 17, The Swan Nebula