How to Find and Observe The Ring Nebula (M57)

M57, the Ring Nebula, is one of the most instantly recognizable objects in the night sky. In this article, I’ll show you how to track down this summer treasure and what you can expect to see through small-to-medium aperture telescopes.

M57 is one of only four planetary nebulae in Charles Messier’s catalog, and the second to be discovered (after M27, the Dumbbell Nebula).

It was first seen in January 1779 by Antoine de Darquier de Pellepoix, and later that same month by Messier himself. Darquier wrote: “It is extremely faint, but perfectly outlined. It is as large as Jupiter and resembles a fading planet.”

Curiously, many astronomers, including Messier and William Herschel, were under the impression that M57 could be resolved into stars. It wasn’t until the advent of spectroscopy, pioneered by William Huggins in 1864, that the ambiguity was resolved. M57’s spectrum revealed bright emission lines that could only have come from fluorescing gases.

As you’re probably aware, the name “planetary nebulae” refers to their appearance through a telescope, not their nature, as shown in the original description of M57 from de Pellepoix. “White Dwarf Nebula” would be a better choice, but astronomy is littered with misleading and archaic terminology, and this is just another example.

The Ring Nebula is a wreath for a dying star, an expanding shell of gas sloughed off by a red giant that has evolved away from the Main Sequence. This shell is then ionized by fierce ultraviolet radiation from the exposed core as it contracts into a white dwarf.

Planetary nebulae can exhibit a variety of exotic forms depending on the viewing angle and/or the presence of companion stars. Using high-resolution Hubble imagery, astronomers have determined that the structure of M57 is more complicated than you might expect, as described in this video (opens a new tab); the seemingly flat Ring is actually barrel-shaped.

Assuming a distance from Earth of 2,300 light-years, the Ring is approximately 0.9 light-years across, with a faint outer halo that increases the diameter to 2.5 light-years.

The expansion rate of the nebula indicates it is about 10,000 years old – a mere blip by astronomical timescales, but this “blip” is a fate that will befall most stars within the 1 to 8 solar-mass range, including perhaps our own Sun.

When is M57 Visible?

This table shows when you can best see M57 from the mid-latitudes of the northern hemisphere. Times given are approximate local times for mid-month using a 24hr clock.Underlined times are during the hours of darkness.

M57 is best seen during June, July, and August. However, depending on how far north you are, your night sky may not get completely dark in the few weeks on either side of the summer solstice, so you may be better off observing it in May, or on an August evening after sunset.

How Difficult is it to See?

Compared to many nebulae, M57 has a high surface brightness that makes it an attractive sight even from light-polluted locations. However, as with most deep-sky objects, you need a dark moonless night to see it at its best.

Any difficulty you do have in seeing it will most likely be due to its size, not its brightness. Unlike M27 (which is fairly obvious even in 7×50 binoculars), M57 appears star-like at low magnifications.

M57 holds a special significance for me because it was one of the first deep-sky objects I tracked down with a telescope.

Having seen photographs of planetary nebulae in books and magazines, I was intrigued that such remarkable objects could exist in space, and I wanted to see one with my own eyes.

Once I started learning my way around the night sky, it didn’t take me long to figure out that M57 should be relatively easy to find.

You can find it too. First, acquaint yourself with the Summer Triangle asterism (shown in the SkySafari 6 image below) and identify the brilliant star Vega, the brightest member of this trio. You might find it easiest to start with the bright constellation of Cygnus to get the star Deneb identified.

Vega resides within the constellation of Lyra, which is also the home of M57. Do you see the distinctive parallelogram of stars that make up the frame of the lyre?

To locate the Ring, use your finderscope (or red-dot finder) to aim your telescope roughly sixty percent of the way along a line joining Gamma Lyrae (Sulafat) and Beta Lyrae (Sheliak).

Remember, M57 is small, so don’t expect to spot it in binoculars or even a finderscope. Instead, use a medium-power eyepiece to identify it. If it’s not already in the field of view, carefully sweep the area until the Ring appears. There’s really no mistaking it! In a smaller telescope, look for a ghostly ‘star’ that appears to be out of focus.

M57 through a Telescope

There’s something almost startling about peering into the eyepiece and seeing a glowing ring floating in a sea of stars – and the good news is you don’t need a large telescope to appreciate it.

In my four-inch scope at a magnification of 111x, M57 looks like a delicate smoke ring frozen in space. It can appear circular at first glance, with the oval shape becoming more apparent the longer you look. A 13th magnitude field star is visible with averted vision just east of the ring.

A narrowband or OIII filter can improve the contrast if you’re viewing from a heavily light-polluted area, but otherwise, M57 is bright enough not to need them.

In my 10-inch reflector, M57 looks significantly brighter and more substantial, and clearly elongated along a northeast-southwest axis. The northwest and southeast edges (on the minor axis) are a little brighter than the rest of the ring.

Even at 133x, it’s noticeable that the central region is not completely dark, but has a somewhat glazed appearance. (It’s worth noting that these features are also visible in smaller scopes, but they become easier to see with increasing apertures.)

Don’t expect to see the vivid greens and reds familiar from images of M57. Although some planetary nebulae do show obvious color even in small telescopes, I’ve never been able to see more than a very slight greenish-blue tint to M57, a hue that fades to uniform grey with increasing power.

M57 holds its brightness well at high powers (240x and above), but I find there’s little improvement in detail. Narrowband and line filters don’t add anything other than making the surrounding field so dark it’s impossible to see the field stop.

With careful use of averted vision, I’ve managed to see a couple of very faint stars on the northern side of the ring, as shown in the sketch below. One of these is the combined light from a multiple star, but the other is listed at magnitude 14.7.

The Ring’s elusive central star is a popular challenge target for experienced observers, but at magnitude 15.3 (against a gauzy backdrop) I suspect it’s out of reach from my suburban location.

Sightings of it have been reported in scopes as small as 9.25 inches, but you’ll need excellent seeing and very high magnification to have even a chance of glimpsing it. If you do attempt it, let us know how you get on in the comments below.

If you haven’t seen M57 before, hopefully, this article has inspired you to seek it out. And even if you have, it’s always good to spend time in the company of an old friend: an ethereal semibreve played on a celestial lyre. 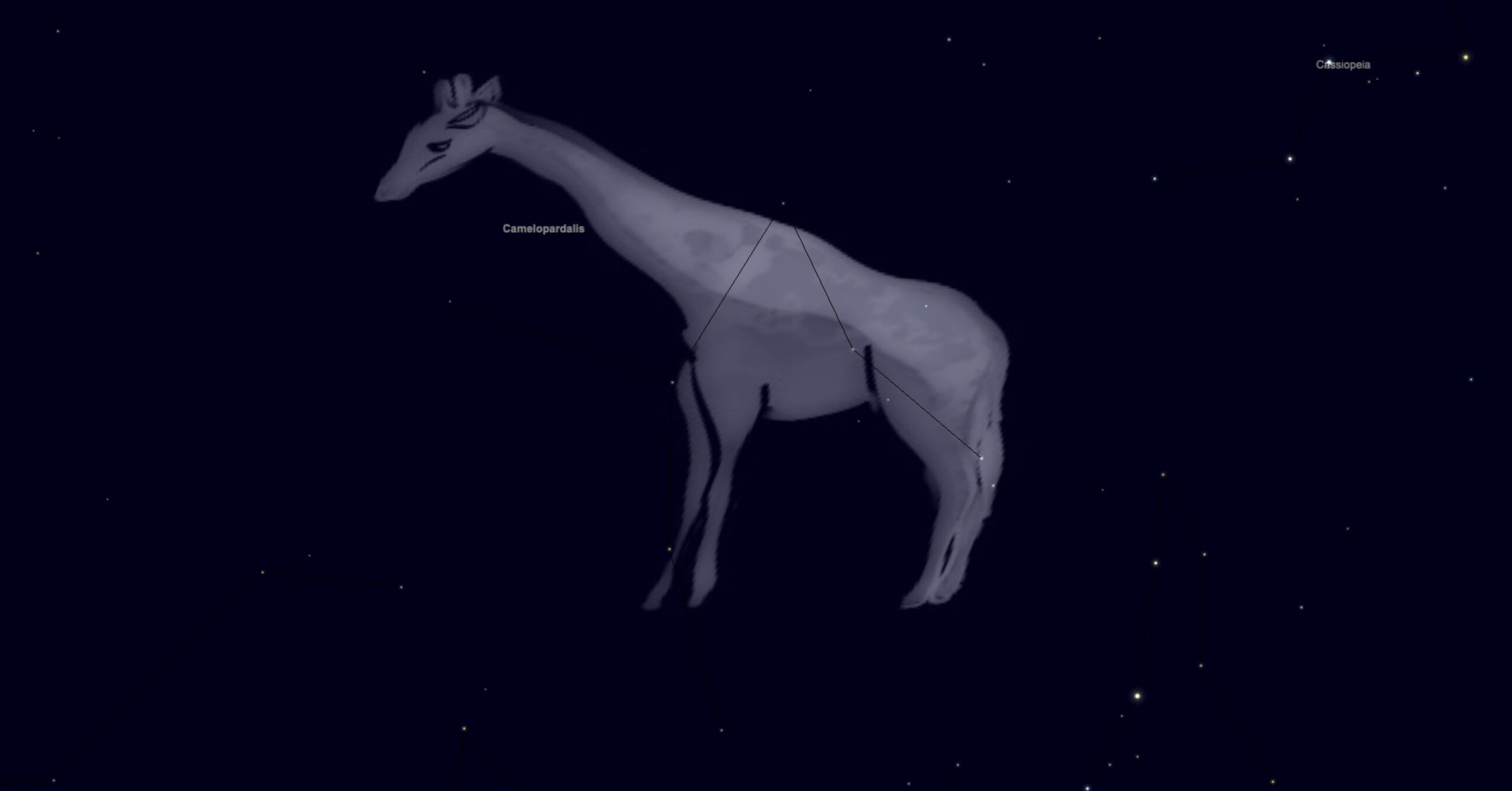 Camelopardalis Constellation – A Guide to the Midnight Giraffe!