How to Find and Observe the Open Cluster M46

Open star clusters provide the amateur astronomer with hundreds of targets to observe throughout the year.

There are clusters to delight everyone, from the well-known Pleiades star cluster (Messier 45), which can be resolved with the naked eye, to those which require binoculars to resolve such as the Beehive cluster (M44) in the constellation of Cancer.

Then there are those clusters that only reveal their splendor in a backyard telescope, such as Messier 46.

Charles Messier is credited with discovering this cluster in 1771, and many observers since have described the cluster in enticing terms. John Herschel called it “superb”, Admiral Smyth referred to it as “noble”, and more recently Stephen James O’Meara described its “visual grace.”

Personally, I find this cluster to be among the most beautiful, and my earliest observing notes recall it “quickly becoming a winter favorite.”

M46 is one of well over one thousand open clusters that have been identified in the Milky Way galaxy. An open cluster is a group of stars that are related, having been born from the same molecular cloud. The stars are gravitationally bound to each other and therefore share a similar age and composition.

I like to think of these stars as brothers and sisters, maturing into young adults and eventually going their own ways. Over time, due to various interactions as they orbit in the galactic plane, the individual stars begin to disperse.

As a result, of this star dispersion, open clusters typically survive for just a few hundred million years. This seems like a long time, however, relative to the 10 billion year lifetime of a star like our Sun, these stars, much like humans, depart the ‘family’ much earlier in life.

In the case of M46, the cluster is relatively young with astronomers estimating the age of the member stars at approximately 55 million years, similar in age to the Pleiades.

When is M46 visible?

These are the approximate rise, transit, and set times for M46 based on the 15th of each month, from mid-northern hemisphere latitudes. Times are local and hours of darkness are underlined.

The best time to view M46 is in late winter when the cluster reaches its highest point in the sky in the late evening.

Viewing in spring is best done as soon as it’s dark and, in fall, as close to dawn as you can manage.

M46 is not visible in the summer months because it’s above the horizon at the same time as the Sun.

As with all observations of deep sky objects, the darker the observer’s location, the easier it is to note details, subtle features, and occasionally colors.

M46 will be barely visible in Bortle 8 skies with a 6 – 8 inch telescope. Observing under Bortle 7 skies will make it easier, while Bortle 6 and darker skies will open up the majesty of this object. (Spoiler alert: read on to learn about a surprise in this cluster, which may not be visible under skies brighter than Bortle 6).

Keen-eyed observers may be able to spot the location of M46 without optical aid as a ghostly glow in the winter Milky-way under dark skies.

The Messier Catalogue contains many of the brighter deep-space objects available to Northern hemisphere observers, and Messier made his observations using a 100mm (4-inch) refracting telescope from downtown Paris, France.

There was indeed less light pollution in the late 1700s, however, from a Bortle 6 location, M46 is visible in 50mm binoculars or a finder scope as a fuzzy, unresolved patch of brightness.

A modern 3″ (75mm) telescope will resolve this cluster, while stepping up to a 4-6 inch (100 – 150mm) instrument will reveal more member stars, allowing you to fully appreciate this object. See our selection of best telescopes for this kind of observing (opens a new tab).

M46 resides in the constellation of Puppis and is found near the meridian (the imaginary line joining north and south compass points via the zenith) in the south, shortly after dark in March.

While January through April are the best months to observe M46, this cluster can be observed in the early morning hours of October through December.

Using images from SkySafari 6, we’re going to provide you with a step-by-step guide to finding the M46 cluster for yourself.

Use the first chart below to orient yourself while facing south. Note the familiar pattern of the constellation of Orion. Next, look southeast to identify Canis Major which features the brightest star in Earth’s sky, Sirius.

From Sirius, it is just a short hop further east to M46.

Our quarry is almost 14 degrees east of Sirius, however, there are no nearby bright stars to aid in its location. Fortunately, we can use three other methods to guide us to M 46.

You may be aware that you can approximately measure angular distances in the sky with your hands. Your fist held at arm’s length spans approximately 10 degrees while spreading your index and pinkie fingers covers approximately 15 degrees.

Try using this method to obtain a general location for M46 relative to Sirius. As noted earlier, if you are under reasonably dark skies you may notice a subtly brighter patch in the winter Milky Way at this location.

If you have binoculars, point them to this region and you will be treated to two ‘faint fuzzy’ objects! The brighter object is another Messier open cluster, M47. From dark skies, M47 may be faintly visible to the unaided eye.

Our target cluster, M46, is the fuzzy object just east of M47. These two clusters are approximately 1.3 degrees apart in the sky or approximately the width of your pinkie at arm’s length.

The star chart below shows both clusters inside Telrad circles (red). The blue ring is a 1° field of view, so it’s easy to see just how close together these two objects are.

Stars are shown to magnitude 5.0 and, for reference, note the location of Sirius at the right of the image.

Lastly, as you can see in the chart below, the 2nd magnitude star Mirzam is 5.5 degrees west of Sirius.

If you draw a line in the sky from Mirzam east to Sirius and then continue the imaginary line approximately 2.5 times the distance between Sirius and Mirzam, you will find M46.

Once you’ve found this relatively bright cluster, what should you expect to see through your eyepiece?

M46 is one of my favorite open star clusters, appearing fairly condensed and quite beautiful at low magnification. At high magnification, it retains its character and even reveals a hidden gem!

While appearing as a fuzzy spot in binoculars, a small telescope of 3 inches (75mm) in diameter will reveal dozens of stars of magnitude 10 and fainter. The old adage of ‘diamonds on velvet’ always comes to mind when I’m observing M46. Apertures up to 6 inches (150mm) reveal upwards of 100 cluster members.

I always start my observations with the lowest useful magnification to provide an aesthetic context for the object. In this case, use your lowest power eyepiece, one that achieves a field of view of greater than 1.5 degrees.

Move M46 to the east side of your field of view and you will see both M46 and M47 in the eyepiece, which is quite a pleasing sight.

As you increase to medium magnification, center M46 and spend a few minutes looking at the cluster as a whole and start to notice the individual stars.

You will begin to see that the stars display various colors, some white and some yellow or reddish. The longer you spend observing, the more saturated the yellow, orange, and red of the stars will appear.

Remember the spoiler alert I referred to? Ready for a challenge? If you have not already, determine which direction is north in the eyepiece. You can nudge your telescope slightly to the north while looking in the eyepiece to determine direction.

As you continue to observe this cluster at medium magnification, you should notice a faint, hazy oval on its northern side. What you’re seeing is a small and ghost-like nebula. Don’t worry if you’re struggling, it is easily washed out under increasing light pollution.

Switch to high magnification as this will darken the apparent sky background and increase the image scale and may make this little nebula slightly easier to see.

A nebula filter may also help (these are some we recommend), but depending on your sky conditions and visual acuity it may not be necessary.

At high power, this ghost-like nebula will appear as a faint smoke ring. You’re looking at NGC 2438, a planetary nebula that is in the foreground of our view! This is a small object at 1.1 arcminutes in diameter. It has a magnitude of 10.8 although its low surface brightness makes it appear fainter.

There are a couple of good reasons why Astronomers believe NGC 2438 is not a member of the M46 cluster.

Firstly, the nebula is estimated to be receding from Earth much faster than M46, with an approximate distance of 2,900 light-years. This places it a little more than halfway from Earth to M46.

Secondly, planetary nebulae occur late in a star’s lifetime, and we know that open clusters consist of relatively young stars. It’s therefore unlikely that M46 is old enough to house a nebula like the one we see.

While the image reveals subtle details of the planetary nebula which are invisible to the eye, it also provides an appealing contextual view of the cluster’s residence in the winter Milky Way.

Observing objects at the eyepiece for extended periods inspires me to learn more about them, and consider my own place in the universe.

As you succeed in using this guide to locate and observe M46, know that astronomers estimate that these stars are approximately 5,400 light-years away.

While this is indeed a great distance from us, consider that our galaxy is on the order of 100,000 light-years across. That 5,400 light-years is only 5.4% the diameter of our galaxy, and if the Milky Way were the city in which I reside, M46 would live in my neighborhood! 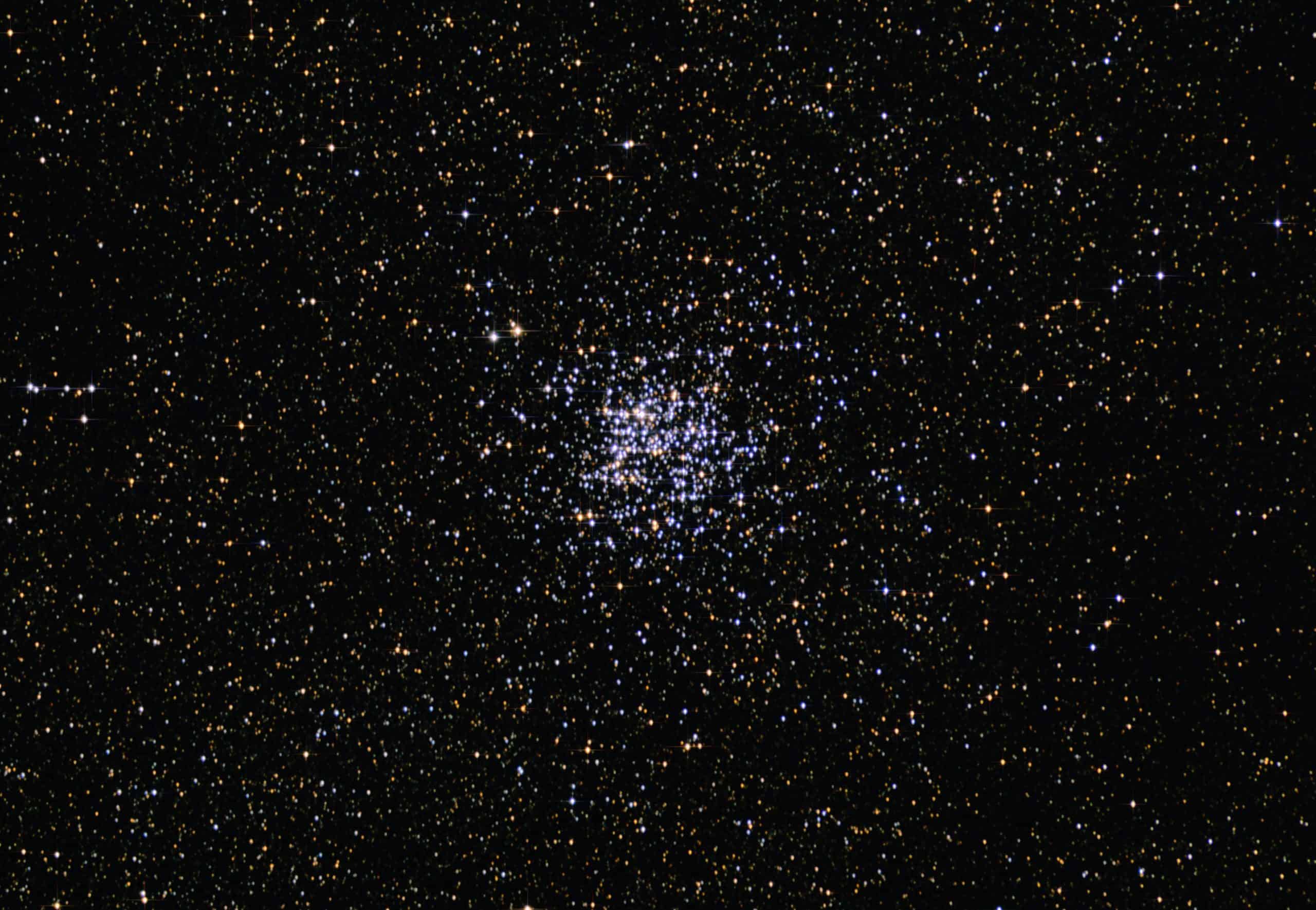 How to Find and Observe The Wild Duck Cluster (M11)