How to Find and Observe The Lagoon Nebula (M8)

If M42 is the Great Nebula of the winter skies, then M8, the Lagoon Nebula, is arguably its summer equivalent (although M17, the Swan Nebula, might have something to say about that). It’s big and bright and it has something to offer for telescopes of all sizes.

In this article, I’ll show you how to find and explore one of the showpiece objects of the summer Milky Way.

The earliest recorded observation of M8 is by Giovanni Hodierna before 1654. It was independently discovered by John Flamsteed in 1680, and further observations were recorded by de Chéseaux, Le Gentil, and Lacaille before Messier added it to his catalog in 1764.

Like the Great Nebula in Orion (M42), M8 is a vast star-forming region in which extremely luminous young stars pump radiation into the surrounding nebula, causing it to glow. Silhouetted against this light we see dark globules of gas and dust, cocooning even younger protostars.

M8 is approximately 4,300 light-years away (over three times farther than M42), towards the galactic center. It’s over 100 light-years across, large enough to span a quarter of the distance between us and the Pleiades (M45).

When is M8 Visible?

This table shows when you can best see M8 from the mid-latitudes of the northern hemisphere. Times given are approximate local times for mid-month using a 24hr clock.

M8 is best seen during June, July, and August.

For observers at higher northern latitudes, where M8 doesn’t rise very high above the horizon, the short summer nights present a dilemma: there’s so much to see in this part of the sky and a limited time in which to observe it. Sagittarius alone contains 15 Messier objects; the most of any constellation.

Do you race from one object to the next in a single night, or do you give each object the time it deserves, hoping that the sky remains clear on subsequent nights?

The answer is, of course, down to personal preference, but it’s better to be spoiled for choice than to have none at all.

How Hard is it to Find and Observe the Lagoon Nebula?

From my suburban location, where the Lagoon never gets higher than 15 degrees above the horizon, M8 is just about visible to the naked eye on a good night as a faint streak of light.

Otherwise, an optical aid should show it clearly, although – as is often the case – you’ll need a dark, moonless sky to see it at its best.

How to Find M8

M8 is easy to find once you’ve acquainted yourself with the constellation of Sagittarius, the Archer. First, identify the three stars that make up the Summer Triangle asterism, Vega, Deneb, and Altair; shown in the SkySafari 6 image below.

This is how the sky will look in mid-July from mid-US latitudes at 10 pm.

If you can see the Milky Way, follow it south. Otherwise, trace an imaginary line from Altair through the body of Aquila, the Eagle, and keep going until you reach Sagittarius.

With a bit of imagination you might be able to visualize the outline of an archer drawing his bow, but these days the constellation is more commonly associated with a teapot.

From my location at 51.5° N, I find that the visibility of Sagittarius is very sensitive to the viewing conditions. Sometimes it’s all but lost in the summer haze; on other occasions the teapot asterism is unmistakable.

If I can see Epsilon Sagittarii (Kaus Australis) shining clearly above the horizon then I know it’s going to be a good night for observing.

In the US, which is quite a bit south of my location, the Teapot rises much higher in the sky and, consequently, is easier to locate.

Now use your finderscope to scan the area north of Gamma Sagittarii (Alnasl) and west of Lambda Sagittarii (Kaus Borealis). Do you see a puff of steam suspended above the teapot’s spout? Congratulations, you’ve just found the Lagoon Nebula.

The image below shows how large the nebula is compared to a Telrad’s finder rings. Note that stars are shown to magnitude 7.0 in this image.

Through binoculars and finderscopes, M8 is unmistakable as a knot of starlight embedded in a fine mist of nebulosity.

M8 through a Telescope

M8 is a treat for scopes of any size, but it’s so feature-rich that it can be hard for inexperienced observers to know where to begin, particularly newcomers who are still getting to grips with the idiosyncrasies of field orientation.

Another problem is that astrophotos of M8 are typically processed to show a huge slab of pink nebulosity rich with intricate detail; a stunning sight undoubtedly, but one that can be difficult to reconcile with the telescopic view.

I find the best approach is to take it piece by piece and remember that through an undriven telescope, everything drifts to the west. So, whatever scope you use to look at M8, the bright 6th magnitude star 7 Sagittarii leads the way (see the star labeled ‘7 Sgr’ in the astro image, above).

A small telescope at low-to-medium power shows a broad expanse of nebulosity bisected by a dark lane angled southwest to northeast. The stars of the open cluster NGC 6530 glitter on the eastern side of this rift.

M8 responds particularly well to narrowband and line filters, which not only help with light pollution but also suppress the bright starlight that can overwhelm the fainter parts of the nebula.

As your telescope gets larger, so will the amount of detail that you can see. Remember that M8 is a massive 90 arcminutes across (three times the width of the full moon), so use your lowest-power eyepiece to get the “big picture” before switching to a higher magnification for better contrast.

In my 10-inch reflector, M8 is so large at 92x that even a 100-degree, wide field of view eyepiece struggles to contain it, but it’s a wonderfully complex region at this magnification with intense blue-white stars and bands of bright and dark nebulae competing for attention.

The nebulosity fills out considerably with the addition of a narrowband filter, revealing another patch to the south extending along the other side of the laguna into NGC 6530, and a fainter band of nebulosity to the north, separated by dark lanes.

The nebulosity becomes even more expansive through an OIII filter, filling most of the field of view (at the expense of the starlight, which is greatly subdued). The large rift dividing the cluster from the brightest part of the nebula is now a dark crescent surrounded by nebulosity on all sides, with the brightest portion transformed into a dense mottled patch of light.

At high powers (150x and above) M8 loses some of its impact, but the brightest part of the nebula is easier to study. The OIII filter shows it intensifying to a tight core that looks like it’s been pinched and twisted into shape: the distinctive Hourglass Nebula.

When you’ve finished exploring M8 the temptation is to immediately head north to M20 (the Trifid Nebula), but don’t neglect some of the other treasures nearby: NGC 6544 and NGC 6553, a pair of globular clusters southeast of M8; and – if you can see down to -28 degrees – the compact and colorful open cluster NGC 6520.

Hopefully, this article has inspired you to take a dip in the Lagoon Nebula this summer. I promise you won’t get wet, but you might not want to leave in a hurry. 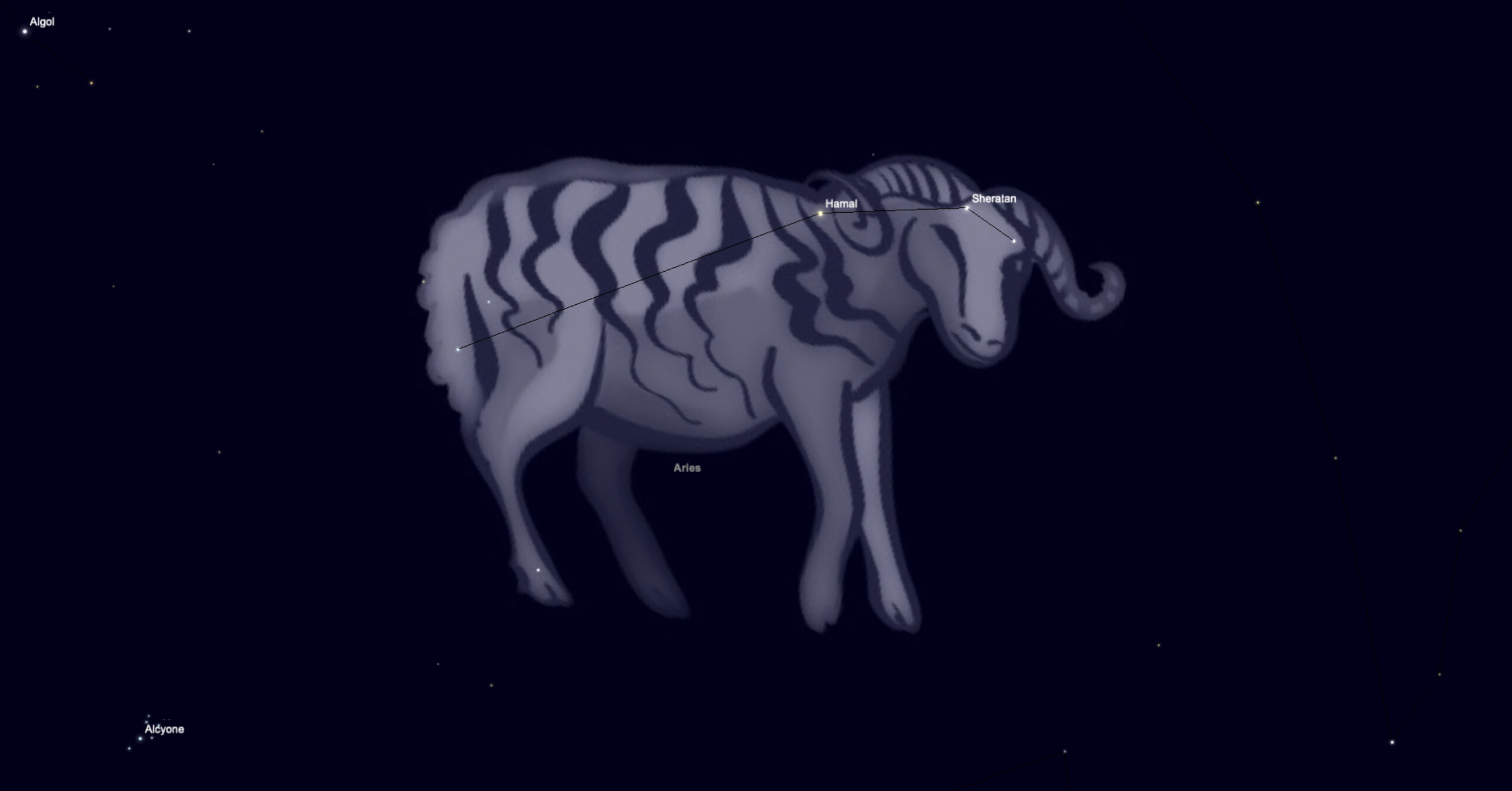 Aries Constellation Guide – A Ram In The Darkness