The Best Meteor Showers of 2023

2022 is a great year for meteor showers gracing our night skies. Simple though they are, these dust trails create some of the most beautiful and mesmerizing night time viewing that can last from hours to days.

In a sky where meteors can appear anywhere and at random intervals, how do you spot these showers? And how do you record them?

Don’t worry, we’ve got you covered!

This comprehensive guide is aimed at making your meteor hunting experience less daunting and more pleasurable by walking you through the best meteor showers this year, where to look for them, and how you can make the most of your adventure.

2022 Meteor Showers At a Glance

We’ve got some good activity happening on nights of little lunar illumination for the Quadrantids, Orionids, and Leonids. The Lyrids, Perseids, Draconids, and Geminids are worst affected by moonlight in 2022.

Keep reading for full details on each shower.

We’re blessed with a new moon coinciding with the important dates this year, so should see plenty of light streaks, including a bright fireball or two which this meteor shower is renowned for.

The best time to watch this year’s Lyrids is before the moon rises in the early hours of 22 April, so get comfortable in the evening of the 21st.

Those are its peak days, but the whole shower lasts from from April 15 to 29. On its peak nights, the Lyrids are expected to produce produce 10-15 meteors an hour.

If you trace the paths of these meteors backward, they’ll seem to radiate from the constellation of Lyra the Harp, near the bright star Vega, which rises in the northeast at 10 p.m.

This meteor shower runs from April 18 to May 27 in 2022 and is expected to peak on the night of May 05 and morning of May 06. The moon will be a five day old waxing crescent, so best views will be had after it sets a little after midnight.

The Eta Aquarids are best observed from the southern hemisphere but the northern hemisphere can observe a decreased rate of 10-30 meteors per hour. For best results, view after 4am, which is when the radiant star of Eta Aquarii rises above the horizon.

The moon also plays ball by being just past new.

Accompanying the Delta Aquarids meteor shower is another, subtler one that peaks at the same time straddling both northern and southern hemispheres.

While this meteor shower, even at its maximum, does not produce more than 5 meteors per hour, it is reputed for bright fireballs that can be easily seen.

The Perseids is one of the most popular showers of the year, reputed for producing large, bright meteors at excellent rates of 50-75 per hour. The whole event lasts from mid-July to late August.

At peak viewing this year, expected on the night of 12 August, the mon will be nearly full and above the horizon throughout the hours of darkness.

We’ll probably have more success if we view a week earlier or later than the peak window, when there are periods of darkness with the moon below the horizon.

The Draconids runs annually from October 6th to 10th, and this year it’ll peak on the night of the eighth.

Unlike other meteor showers that need to be viewed in pre-dawn hours, you’ll find more meteors from Draconid if you watch it in the early evening rather than late night or early mornings.

The moon on will be practically full when the shower reaches its peak, drowning out many of the dozen or so meteors we would see every hour in a dark sky.

Last year’s event was lost to a full moon. This year, the moon is only 12% full and in its waning crescent phase, meaning it will be below the horizon until after midnight.

The Orionids’ 2022 peak is expected before dawn on October 21. The Orionids are usually best hunted during pre-dawn hours, so we’ll still have to deal with that thin moon. It could be worth it though – this shower is well known for persistent trains and occasional fireballs.

The Taurids meteor shower runs from September 28 to December 22 in 2022 but is expected to peak on the night of November 05.

This is not an exciting shower, producing just a handful of trails every hour. This year it’s even worse because the near-full moon obscures the seeing. The best time to try and view these shooting stars is in the pre-dawn hours after the moon sets.

The Leonids produces a steady show of shooting stars from 06 to 30 November, peaking as the 17th becomes the 18th of November.

There will probably be 10-15 per hour meteors per hour and we should be able to see most of them if we settle in for viewing before the moon rises a little after 1am. With the moon one-third illuminated, it will have an impact on what we can see.

The Geminids shower is expected to peak on the night on December 14, 2022 before midnight. The whole shower produces shooting stars from 04-20 December this year.

The moon is two-thirds illuminated on this date but it’s not rising until after midnight. This could mean we get to enjoy a spectacular shower in the evening which becomes somewhat dulled in the early hours.

Even so, with up to two meteors every minute, there could be several bright ones in there that not even the moon can block out.

The last shower of the year rains down on us from 17-26 December, peaking on the night of the 22nd.

The moon is new, so will not cause us any problems as we see out the year with a fine Ursid shower. It might only produce 5-10 meteors per hour, but it should make the pre-dawn hours worth being outside for.

As comets orbit our solar system, they leave behind a trail of ice and dust particles.

When Earth’s circular orbit overlaps the comets’ highly elongated ones, our planet encounters upwards of half a billion of these comet particles.

Earth’s gravitational pull sucks them in towards itself, revving their speeds up to 160,000 miles an hour. As they encounter our atmosphere, friction heats them up to 2000° Fahrenheit.

As the comet particles slam into Earth’s upper atmosphere, their icy nuclei vaporize in a matter of seconds, liberating the dust within. This dust gives off a brief, often vibrant burst of light as it too is vaporized, which we see as the proverbial ‘shooting star’.

This feat, as seen from the ground, produces a dense and steady stream of incoming meteors, their numbers ranging from a couple dozen each hour to tens per second, depending on which comet’s trail we’re passing through at the time.

Since comets’ paths around the sun are relatively fixed, meteor showers are well documented and occur approximately at the same time each year.

On any given night, there may be four or five visible shooting stars every hour. The easiest way to spot them is to notice their fast speeds. Stars twinkle, planets shine calmly, and meteors streak across the night sky in a whizz of light.

Learn how to photograph the night sky to capture meteor trails

While occasional shooting stars are visible almost every night to a patient observer, they arrive in bulk during a meteor shower.

The duration of these showers depends on the width of the dust trail shed by comets. The smaller the dust particle, the easier it is moved by the Sun’s wind (solar wind), causing a more extensive trail. In such cases, Earth takes quite a few days to pass through the trail.

To make the most of their visibility, you have to locate the point from which the shower seems to originate (the radiant) by tracing its path backward.

Though meteors appear to fill the sky, they come from the same direction in space and will be traveling away from their radiant. Each meteor shower is named after the constellation its radiant is located in.

For example, the Perseid meteor shower has its radiant in the constellation of Perseus.

Knowing the rising time of the constellations is probably the best way to prepare for your observations since it determines when the shower will be the maximum from your location. Use paid software like Sky Safari, or free versions such as Stellarium to help you out.

It is important to remember that moonlight seriously hinders meteor watching. However, most of the showers last many days, if not months, so time your observations when the moon is not so bright or when it is not high in the sky.

While you can carry a pen and a clipboard to note down the number of meteors, you will have to take your eyes off the sky, leading to inaccurate observations.

Instead, you can speak into your audio recording device. Make sure to record at least for an hour, since that covers both high and low meteor activity.

The International Meteor Organization (IMO) also has a list of software tools that can aid in spotting constellations and predict meteor scatter. If you happen to observe a fireball, the IMO has an ever-expanding database where you can contribute your sightings.

The first item on your checklist is a dark sky. While moving away from cities is needed, the Dark Site Finder displays a bunch of places with the darkest skies. These are usually dark sky reserves—places with the least amount of light pollution, and your best bet to watch a great meteor shower.

You’ll get the best view of the night sky when you lie on your back (the horizon should be visible at the edge of your peripheral vision). Make sure to move away from the city lights and allow at least 30 minutes for your eyes to adjust to the darkness.

Discover what astronomy you can do in the city!

While you do not need any special or professional equipment, you can consider carrying along a star map to navigate the sky and spot constellations. We recommend a decent planisphere, like these.

Since meteor watching can consume many hours, consider spreading out a thick blanket or relaxing in comfortable chairs while you wait for the show. We’d also recommend a Thermos of hot coffee too, just to keep away the chills.

Oh, and don’t forget to add loads of excitement to your checklist. Happy meteor watching! 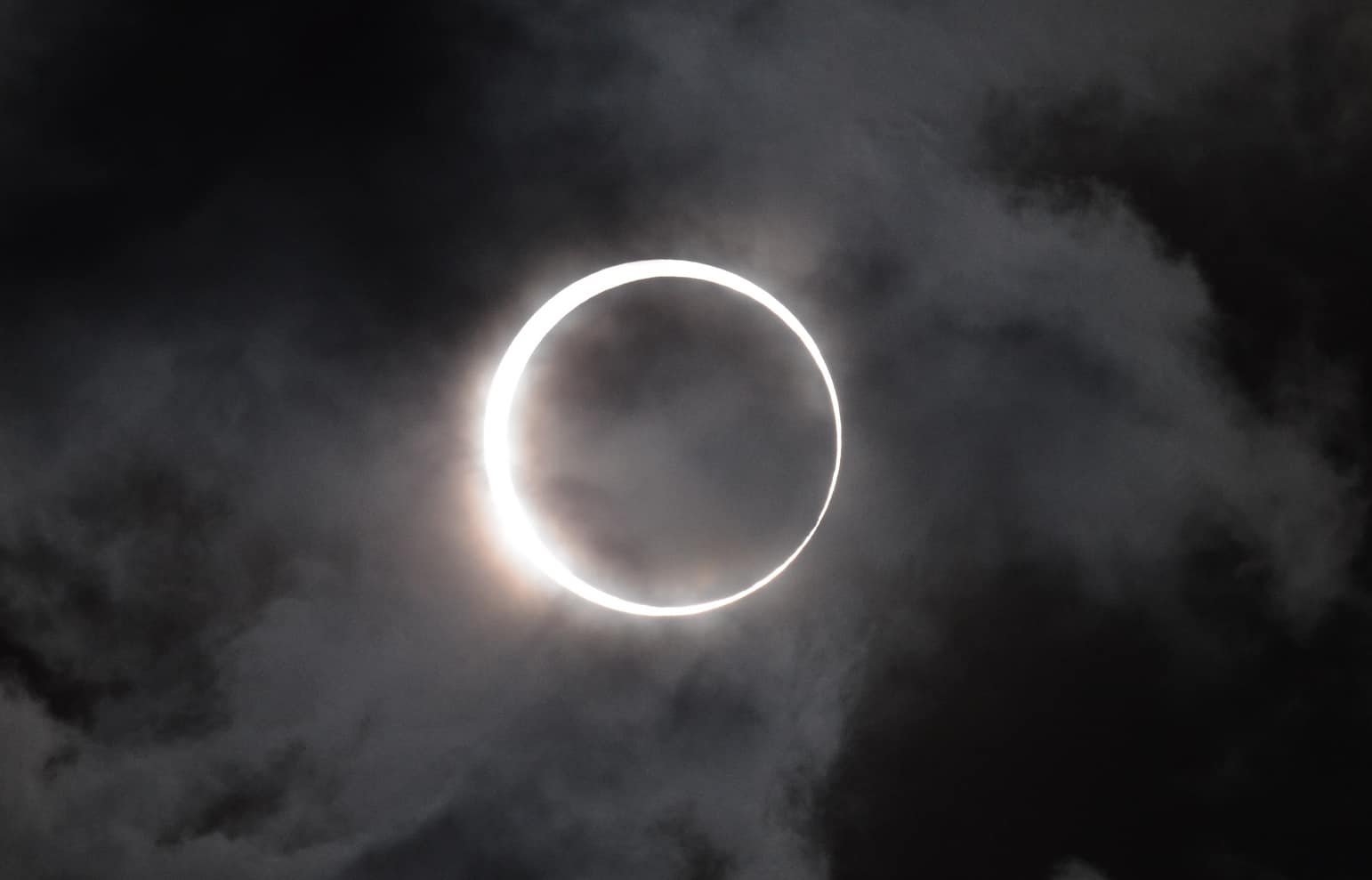