The Planet Neptune: Everything You Need to Know

By Sharmila Kuthunur
|
6 minutes
Home »Astronomy »The Planet Neptune: Everything You Need to Know

In the dark, outer reaches of the solar system, Neptune orbits the Sun as the eighth and final planet in its system.

After this new planet was discovered in a joint British-French-German effort in 1846, the roman tradition of naming planets after their gods was followed; Neptune was named after the Roman god of the sea, most likely due to its blue appearance.

Neptune, alongside Uranus, is one of the two ice giants in the solar system. Why is it called an ice giant? And what makes it different from our system’s other gas giants?

This article is your guide to understanding all you need to know about Neptune.

When was Neptune Discovered?

Unlike other planets, Neptune has not one but three discoverers.

Neptune was mathematically predicted before it was directly observed by the French astronomer Urbain Le Verrier in 1846. Afterward, the German astronomer Johann Gottfried Galle and British astronomer John Couch Adams independently observed and identified Neptune within just one degree of the position that Le Verrier had calculated.

These observations were made on September 23, 1846, and this is why Neptune is a French-German-British discovery.

Nearly 140 years after Neptune was directly observed, NASA’s Voyager 2 became the first and only spacecraft to visit Neptune.

While there, Voyager 2 was instrumental in discovering 5 new moons, 4 rings, and a ‘Great Dark Spot’, which is a storm system nearly the size of Earth.

Neptune is an Ice Giant

Every planet has some amount of ice present. In a few planets, especially those far away from the Sun, the amount of ice is greater than the gas content, which is why they are called ‘ice giants’.

There are two such planets in our solar system, Neptune and Uranus. Ice giants are fundamentally different from their gaseous counterparts, which have more gas than ice. Astronomers believe that classifying ice giants as a separate category of planet helps with understanding how their formation is different from gas giants.

Neptune has an average temperature of -353 F (-214 C) and has strange and wild weather. Its equatorial regions experience wind speeds of over 700 mph at any time, which is greater than the speed of sound here on Earth!

Neptune has the highest wind speeds of any planet in our solar system. Even more mysterious is the fact that the planet receives 1000 times less sunlight from the Sun than Earth does, so it is unclear where it gets the energy for intense wind speeds.

When Voyager 2 visited Neptune, it took images of a series of dark spots in the planet’s atmosphere. These are anticyclonic storms similar to the Great Red Spot on Jupiter but are dark blue instead of red.

This further fascinated scientists because Neptune’s distance from the Sun, and the lack of incoming energy, meant that the planet should mostly be dormant. Instead, scientists discovered the Great Dark spots where wind speeds reach nearly 1500 mph.

The spots themselves occur every 4-6 years and lasted on an average for 2 years. It is believed the white clouds show that the storms develop deep in Neptune’s atmosphere but the mechanism is not well understood.

Unlike Jupiter’s Great Red Spot, the Dark Spots slowly drift across latitudes in Neptune’s atmosphere before they are broken apart by the planet’s strong winds.

How Far Away is Neptune?

This makes Neptune’s orbit almost 30 times farther out from the Sun than Earth’s.

How Long Does Neptune Take to Go Around the Sun?

At its average distance of 2.79 billion miles (4.49 billion km), Neptune takes 165 Earth years to finish one orbit around the Sun. A day on Neptune lasts exactly 16 hours, 6 minutes, and 36 seconds.

In fact, in 2011 it finished its first complete orbit since its discovery in 1846.

Before Pluto stopped being a planet, we were taught that it was the farthest planet out from the Sun. However, Pluto’s orbit is much more elliptical than Neptune’s causing the dwarf planet to slip inside Neptune’s orbit once every 248 years.

Once inside, Pluto stays closer to Earth than Neptune for 20 years before moving back outside of Neptune’s orbit. The this last happened from 1977 to 1999. It won’t happen again until 2227.

How Far is Neptune from Earth?

How Many Moons Does Neptune Have?

Neptune has 13 known moons. The three largest moons are Triton, Proteus, and Nereid, all of which carry the names of minor Greek deities.

Triton is the only large moon in our solar system that orbits its host planet in a direction opposite to the planet’s rotation. At a magnitude of 13.5, Triton is only visible with larger backyard telescopes.

Does Neptune Have Rings?

Yes, Neptune has 6 main rings. They were first discovered in July of 1984 by three astronomers at La Silla Observatory in Chile: Patrice Bouchet, Reinhold Hafner, and Jean Manfroid.

The five rings were named Galle, Le Verrier, Lassell, Arago, and Adams in order of increasing distance from Neptune. Three of these rings are narrow, with maximum widths 62 miles (100 km). Galle and Lassell rings are broader, with widths up to 1242 miles (2000 km) to 3106 miles (5000 km).

All the rings are reddish in color, thought to be organic elements that reacted with strong radiation. Because of this darkness, the rings are not visible from Earth with a backyard scope.

The Astronomer’s Guide to Neptune

Spotting Neptune is a little tricky because it is the only planet that is beyond naked-eye visibility. It has a maximum magnitude of 7.6 whereas humans can only see until 6.5. That being said, it is possible to view Neptune at specific times this year.

For full details, read our guide to seeing Neptune with a telescope.

Neptune is the eighth planet in our solar system and orbits the Sun at an average distance of 2.79 billion miles (4.49 billion km). At this distance, Neptune takes 165 Earth years to finish one orbit around the Sun, while one day lasts a little over 16 hours.

Neptune is the only planet in our solar system that is beyond naked-eye visibility and so can only be seen using binoculars or a telescope.

Much of what we know about the planet comes from NASA’s Voyager 2 spacecraft. It was Voyager 2 that imaged Neptune’s Giant Dark Spot, one of a series of dark spots in the planet’s atmosphere.

Neptune also has 13 moons of which Triton is the largest, and 6 main rings. While its moons and rings are practically impossible to see because of their darkness, Neptune itself can be observed.

We hope these fascinating points come to mind next time you see this blue planet! 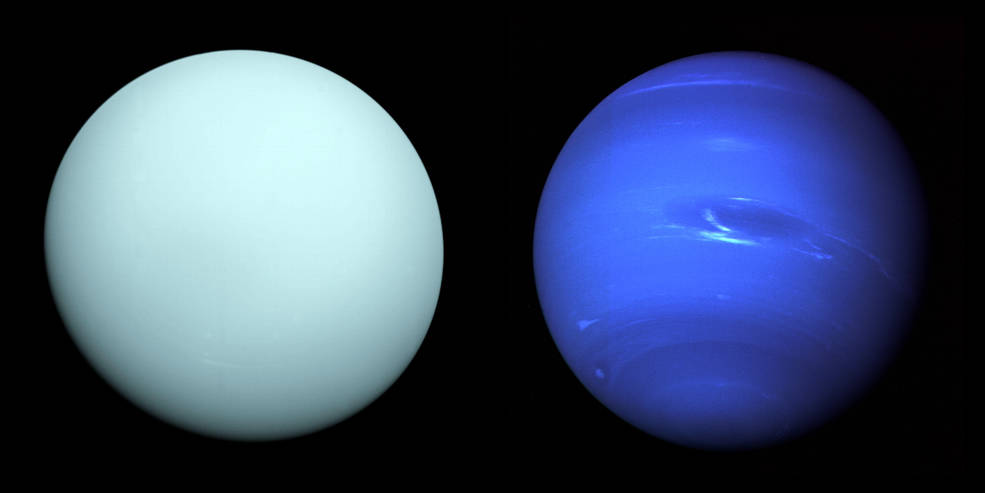 What are the Differences Between Uranus and Neptune?