How Many Stars Are Within 10,000 Light-Years of Earth?

By Adam Kirk
|
9 minutes
Home »Astronomy »How Many Stars Are Within 10,000 Light-Years of Earth?

We’ve got a good idea of how many stars we can see at night but that doesn’t tell us how far away they are.

We also know how to measure the distance to a star, but that doesn’t help us answer how many suns are within 100 light-years of our solar system.

Since we wanted to know the answer, we went ahead and counted, using our favorite astronomy software SkySafari 6.

Of course, you want the answer to your question but stick with us one minute while we explain how we got to the answer, and then we’ll share all the relevant data we’ve compiled.

SkySafari 6 is an astronomy app that holds lots of data on each of millions of stars. Helpfully for us, they also have a search function that lets you specify what it is you’d like to observe.

We counted the number of stars in bands of distance from Earth measured in light-years (find out what a light-year is, opens a new tab). The bands we used to gather the data are:

We carried out a simple count of all the stars in the database and a separate count of the stars brighter than relative magnitude 6.0 because these are visible to the naked eye under a dark sky.

There are two limitations to the data which we need to point out before we let rip with our findings.

With all that said, let’s move on to the main business.

How Many Stars Within 100 Light-Years of Earth?

There are 59,722 stars visible with a telescope within 100 light-years of our solar system. Of these, 471 shine at magnitude 6.0 or brighter, making them visible to the naked eye under a dark sky.

If you’re anything like us, that answer alone won’t have come close to satisfying your curiosity. Or, it has, but a load of new questions has been set off in your mind.

Let us share our data with you and have a dive into the facts and figures behind it all.

The Number of Stars Within 3,000 Light-Years of Our Solar System

We counted the number of stars, including all the different types of star, within 3,000 light-years of Earth on 100 light-year intervals.

While we were at it, we also counted the number of suns visible to the naked eye, i.e. those brighter than magnitude 6.0.

You can see our data table below. Underneath that, we’ll summarize the more interesting insights.

The next two columns cover all stars to magnitude 15.0. The first of these is a count within the band, the second is a running total of all stars.

The last two columns do the same thing but this time only for stars we can see with the naked eye, i.e. those of magnitude 6.0 and brighter.

Moving to the right, we can see there are 97 naked-eye stars within the same band, bringing the running total to 4,542.

A table of that size is not immediately easy to interpret, so let’s break it out into a couple of separate charts. This first one shows the total number of stars in each 100 light-year bands.

We can see that the number of stars we can see with a telescope drops rapidly with the distance. We could have guessed that would happen, after all, generally, the further away a star is, the dimmer it is, but the rate is a surprise.

This second chart shows the number of stars visible to the naked eye for every 100 light-years ‘shell’ around the Earth, out to 3,000 light-years away.

How Many Stars Within 1000 Light-Years of Earth?

There are 271,732 stars within 1,000 light-years of Earth which are visible in a backyard telescope. Of those, 4,542 are brighter than magnitude 6.0 and visible to the naked eye.

As we move further out from Earth, there are fewer suns visible in our telescopes. The following summarizes the numbers out to 3,000 light-years:

The same holds true for stars visible to the naked eye, i.e. those that shine brighter than magnitude 6.0:

The Number of Stars Between 3,000 and 5,000 Light-Years From Our Solar System

We’re moving much further out in this next section.

This bunch of stars is so far away that it takes their light between 3,000 and 5,000 years to reach us. There is still plenty of stars we can see in our telescopes and even some that we can see with the unaided eye.

Let’s start with a look at our data table for this group.

The column format is the same as used above, so we won’t explain it again here, other than to note that the ‘Running Total’ columns carry on from the previous total.

Remarkably, there is still a handful of naked-eye stars beyond 4,000 light-years from us. These are:

How Many Stars Within 5000 Light-Years of Earth?

There are 340,810 stars within 5,000 light-years of Earth which are visible in a backyard telescope. Of those, 5,084 are brighter than magnitude 6.0 and visible to the naked eye.

As we move beyond 3,000 light-years from Earth, there are significantly fewer stars visible to our telescopes. In fact, more than 98% of all the stars our scopes can see are closer than that.

The following summarizes the numbers out to 5,000 light-years:

The same holds for stars visible to the naked eye, only more so. Less than 1% of all the stars that shine brighter than magnitude 6.0 are more than 3,000 light-years from us:

The Number of Stars More Than 5,000 Light-Years from Earth

Technically, we’re looking at stars between 5,000 and 10,000 light-years distant because we don’t have distance data for stars further away than that.

However, as the table below suggests, there are very few stars we can see that are beyond that distance, even with a high-quality backyard telescope.

When you consider that our galaxy, the Milky Way, is believed to be 100,000 light-years across, you realize that we can usefully only see individual stars about 10% of the way across it (5% in each direction from Earth).

Let’s finish with a quick note on the stars visible to the naked eye at this distance. It’s a safe bet that the 26 stars we can see unaided from more than 5,000 light-years away are either very large, very bright, or both.

The eleven most distant stars that we can see unaided are:

The most distant star visible to the naked eye from the northern hemisphere is HR 7589 in Cygnus. It is 7,600 light-years from Earth.

We’ve highlighted HR 7589 in the SkySafari 6 chart above. Try looking for it under a dark sky next time the constellation of Cygnus flies high, and wonder at seeing the most distant star visible to the naked eye.

How Many Stars Within 10,000 Light-Years of Earth?

Looking out beyond 5,000 light-years from Earth for individual stars is an increasingly fruitless exercise. Even with a respectable backyard telescope, fewer than one in 200 of the stars you can see are further away than this.

The following summarizes the numbers out to 5,000 light-years:

Amazingly, however, there is a tiny group of 26 stars that are more than 5,000 light-years away but still visible to the naked eye. All except four of them are within 8,000 light-years of us, including the most distant one we can see from the northern hemisphere.

This has been a great voyage of discovery for us and we hope you found that it scratched your knowledge itch.

Ultimately, this is perhaps not a surprise since we’re more likely to see suns that are closer to us. However, we enjoyed learning where to see a star with our naked eye which is more than 7,500 light-years away.

What puts us firmly in our place is realizing that even a very powerful telescope can only show us detail for about 5% of the galaxy we call home. 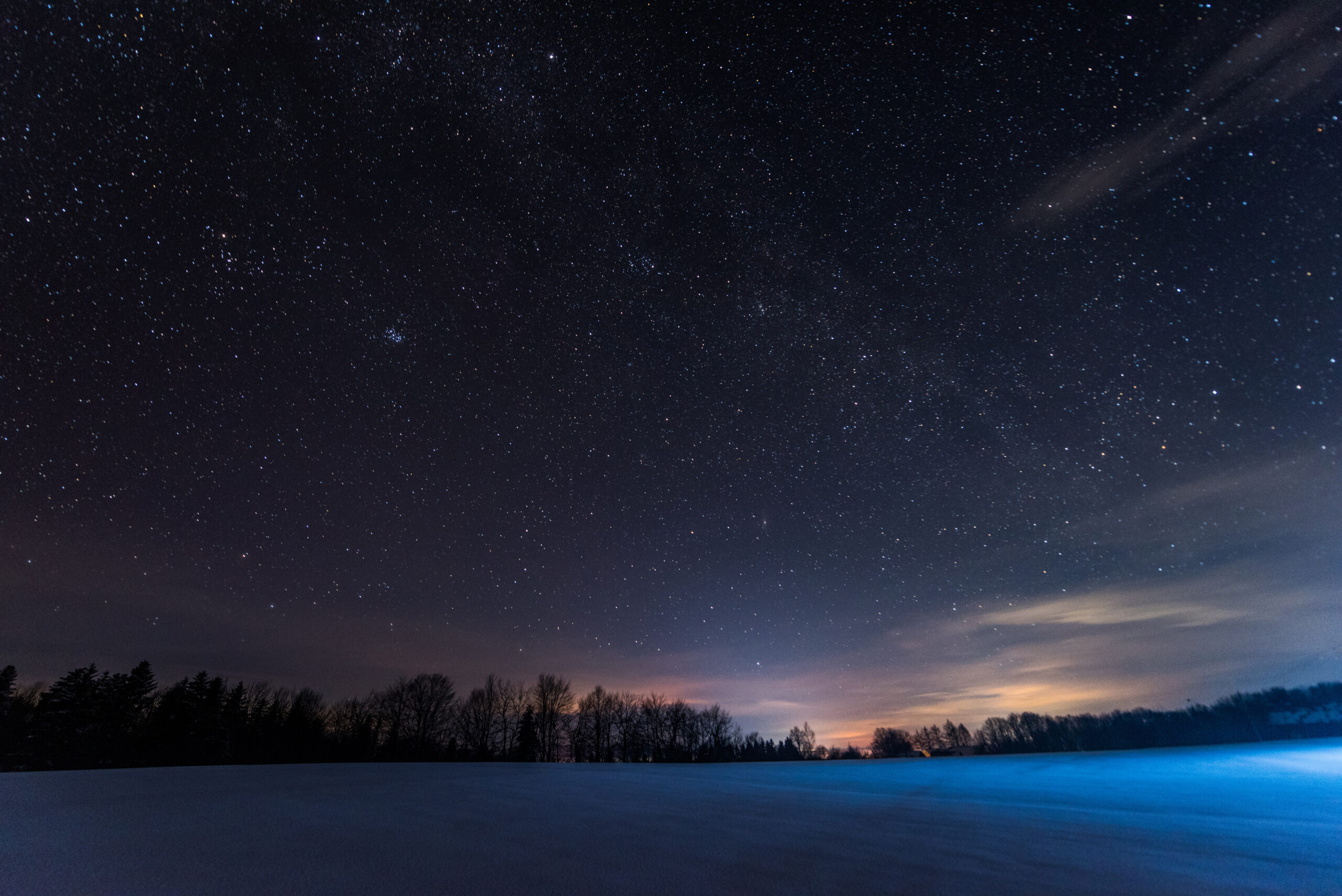 How Far Away Are the Stars and How Do We Measure That?