What are Binary Stars and How are They Created

When we think of stars, individual specks of light come to mind. Each one a world of its own, but separate from the others out there.

However, 85% of the stars in just our galaxy itself are multiple star systems of 2 or more stars.

How did so many stars get their companions?

Let’s take a look at how binary stars come to be, why they are important, and how you can try spotting some of these unseemingly common worlds.

What is a Binary Star?

Binary stars are two stars that orbit each other and are gravitationally bound together.

While not always evident because of the astronomical distances involved, the two stars in a system orbit each other around a common center of mass, called the barycenter.

The distances between stars in a binary system vary tremendously. In a few binary systems, the stars are so close that their surfaces touch (known as contact binaries); in others, one star gobbles material from the other. Still others can be more than a light year apart from each other and their orbits last hundreds if not thousands of years.

Binary stars are important because their orbital periods can give insights into the masses of the system’s components. They can indirectly tell us the radius and density of the stars within the system.

While 85% of the stars in our galaxy alone might be binaries and multiple star systems, their abundance is also rich in variety. Wide binary stars, for instance, are pairs of stars separated by more than 10,000 AU (astronomical units). At this distance, their orbits are extremely eccentric and they’re liable to have a much shorter lifespan than closer binary pairs.

A 2014 study states that such wide binaries may be the dominant source of stellar collisions in our galaxy. When a third star travels close by the wide binary, it causes the whole system to become temporarily unstable, increasing the likelihood of a collision.

At the opposite end of the spectrum, close binaries orbit each other at just 18 AU or less — a distance so close that the bigger star is able to suck the smaller star’s mass.

Known as cataclysmic variables or vampiric stars, these systems are true to their name. The more massive star, usually a white dwarf, sucks in matter from its companion, usually a main-sequence star. These two stars are usually separated by a distance roughly the same as the Sun’s diameter.

When matter falls from one star to the other, abundant X-rays are produced. Such stars are also easily visible in X-ray observations and are called X-ray binaries.

This kind of system can evolve into a ‘Be X-Ray’ binary, where the more massive star ends up as a neutron star orbiting the originally smaller companion.

Sometimes, a pair of stars might be aligned edge-on to the line of sight from Earth. When we observe them, we notice a dip in brightness as one stars orbit brings it directly in front of the other. These are called eclipsing binaries.

Since most binary star systems are too far away for telescopes to see the two stars distinctly, astronomers detect Doppler shifts in the star’s spectral lines to distinguish the two stars. Binary systems identified by this method are called spectroscopic binaries.

In a few other systems, the primary star is observable but its companion isn’t. Astronomers then look for the gravitational influence to detect the dimmer star. This method is called astrometry, and stars detected with this method are called astrometric binaries.

Each star within a binary (or multiple) system is given a letter designation, beginning with ‘A’ and working through the alphabet.

The A refers to the primary star and B to the secondary in a binary star system. In multiple star systems, C, D, E, and so on are used as well. The A designation is awarded to the brightest star, followed by B for the next brightest.

However, we may later learn that one of the binary pair is itself a double. In which case we introduce a ‘C’. Epsilon Lyrae in the constellation of Lyra is famously known as the double double and demonstrates the naming convention well.

The left image (both are from SkySafari 6) shows how Epsilon Lyrae appears as a single, unremarkable star to the naked eye. The right image (which can be clicked to enlarge) shows that it is actually a pair of double stars, AB and CD. Hence, the double double.

The distance between binary stars is calculated depending on their visual separation. When they too close to be detected visually, astronomers opt for spectroscopy.

Astronomers also measure the position angle of the primary star relative to the secondary. In doing so, they assume north to be zero degrees and measure the angle towards the east direction.

For an example, let’s use one of the best known doubles out there, Alberio in the swan constellation of Cygnus. The two stars in the double are known as Beta1 Cygni and Beta2 Cygni or, Albireo A and Albireo B respectively.

A star chart will tell you that this is a double star whose components shine at magnitude 3.19 and 5.09. It will also say that they are 34.6 arcseconds apart, at an angle of 54.0°.

To make use of this information, assume the A component is at the center of a circle with a radius of 24.6 arcseconds. The B component is found 54.0° clockwise around from north on that circle, as shown in the image below.

The universe hasn’t limited star systems to pairs. When there are more than two stars in a system, it is known as a multiple star system. Three stars gives a triple system, four is a quadruple, and so on.

While the dynamics between just two stars in a binary system are simple enough, multiple star systems have complex interplays. Their interactions are divided into two broad categories.

Hierarchical systems are those where the multiple stars are divided into subgroups. HR 6819 is one such example. It is a triple star system, but two of the stars form a binary system and the third is a standalone star.

When stars are subdivided into groups like this, their orbits are clear and are mostly stable.

Stars in larger groupings have extremely unstable orbits. These are mostly young stars in stellar nurseries where the rate of formation is high and stability is low.

Gliese 644B has 5 stars in its system. The primary star has an orbiting binary pair and two standalone stars, leading it to be a quintuple system. An easy to see star, Castor, in Gemini, has six stars making up its system, making it a sextuple star system.

The most complex systems we’re aware of are Septenary ones, with seven stars in complex orbits around each other.

How Do Binary Stars Form?

The beginning of a binary system is the same as every other star — a cloud of gas and dust that flattens into a disk. The primary star forms at the center of the disk, and the disk itself retains enough material to give birth to another star. The two stars orbit each other and are gravitationally linked.

How fast they orbit each other varies. The two white dwarfs forming the HM Cancri system have the shortest orbital period of just 5.4 minutes. They are only 49,700 miles (80,000 km) apart.

Other systems have longer periods, usually in terms of years if not centuries. Stars in HD 54662 have an orbital period of 5.7 years.

Yes! Planets can orbit binary stars, although such systems are rare to find.

One example is PSR B1620−26, a binary system consisting of a pulsar and a white dwarf that also boasts an exoplanet.

Planets orbiting binary stars do so in two ways: they can either orbit just one star and ignore the second, or orbit both of them from outside the system (these are called circumbinary stars).

Examples of Binary Stars to Look For

Pick any star from the thousands you can see at night and the chances are that it’s be a double. Take a look at any of our constellation guides and you’ll see the list of bright stars is full of doubles.

The table below shares a selection of some of the brightest overhead at night.

The rich variety of binary and multiple star systems might make our single star system look dull. But the reality is that single stars are the rarity – binary systems are much more common in our galaxy.

There are systems with 2, 4 even 6 stars out there, and their dynamics are a complex adventure in math and astrophysics.

Nonetheless, they begin and end as every other star out there, and make our cosmic world a very interesting place to explore. 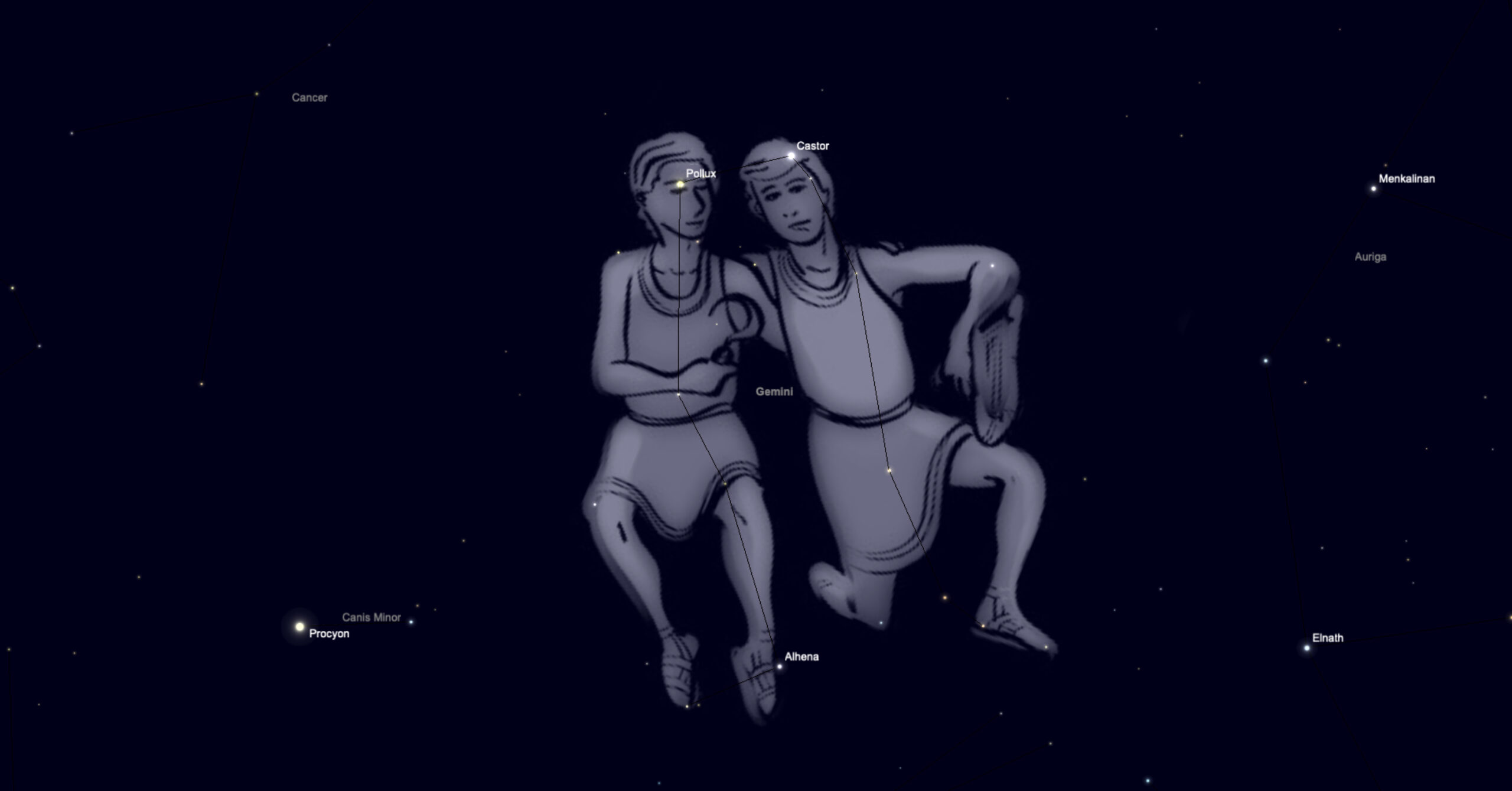