What is Magnitude in Astronomy? Absolute, Apparent and Stellar Magnitude Explained for the Backyard Astronomer.

By Adish War
|
11 minutes
Home »Astronomy »What is Magnitude in Astronomy? Absolute, Apparent and Stellar Magnitude Explained for the Backyard Astronomer.

If you’re a passionate stargazer and have been using sky-charts, chances are high that you’ve come across the term ‘magnitude’. Depending on your expertise level, you may have assumed that stellar magnitude refers to the size of the celestial objects.

Although magnitude may seem to be a fancy way of referring to the size, it actually has nothing to do with size!

So what is magnitude?

This article will tell you everything you need to know about magnitude, including:

Clearly, there’s a lot to learn about magnitude, so let’s begin right away!

What is the Difference Between Apparent and Absolute Magnitude?

Magnitude is a measure of how bright or dim an object appears in the sky. Notice that we used the term ‘appears’ in the definition. It is because magnitude, as we usually mean it, does not tell how bright that object really is. It merely refers to bright it seems to be.

To show you what we mean, let’s compare two night objects – our Moon and Sirius (the star). The moon appears to be brighter, so its magnitude is higher on star charts. Clearly, though, a star like Sirius is much brighter in real life than our moon which is only reflecting sunlight and not generating any of its own light.

This is an example of apparent magnitude. In other words, the brightness of an object as it appears to is down on earth.

If we used absolute magnitude in our previous example, Sirius would be more luminous than the moon.

To make the difference crystal clear let’s give the dictionary definition of apparent magnitude and absolute magnitude:

Which leaves us with one last question on how absolute magnitude is defined: what is a parsec?

A parsec is a unit of measurement used in astronomy and space travel equal to 3.26 light years. This article is not the place for a detailed description of a parsec, but if you’d like to learn more, watch the video below.

For more information regarding magnitude and luminosity, here’s a great article from EarthSky.org which has a good level of detail in it.

To keep things simple, in the rest of this article we’ll be talking about apparent magnitude, i.e. how bright objects appear to be unless we say otherwise.

How is Magnitude Measured?

Ancient astronomers Hipparchus and Ptolemy devised the magnitude scale that we use (in a modified form) today. In their scale, the brightest stars were given a magnitude of 1, and the dimmest, barely visible stars were of a magnitude 6. All other stars fell in between 1 and 6.

Of course, with our powerful telescopes, we regularly look at objects Ptolemy did not even imagine. As such, we have expanded this scale to include much dimmer celestial bodies, such as faint nebulae and distant galaxies.

We also extended the scale to cover brighter objects. like the sun and – if you use the absolute scale – other stars much brighter than our own sun. What’s unusual about the magnitude scale is that brighter objects have a smaller number. This number can decrease in size even below zero. For example, a star with a magnitude of -1 is brighter than a star of magnitude 0.

Now, you may find this system confusing, especially if this the first time you’ve read seen it working. Just remember the brightest stars have the smallest magnitude. Negative magnitudes are brighter than positive ones, so it’s the fainter stars which have bigger magnitude numbers.

Here’s a little exercise for you – what do you think is the magnitude of the moon, on this scale. Think about whether it will be more negative or more positive than Sirius?

The magnitude of a full moon is approximately -13 (say ‘minus thirteen’) since it definitely appears brighter than Sirius in our sky. To prove the point, we can’t see Sirius in the day, but we can see the moon.

Let’s get into the little details of this system and look at how to calculate magnitude.

How The Apparent Magnitude Scale is Calculated

Our magnitude 3 star is actually 6.25 fainter than our magnitude 1 star because we multiply together two lots of that 2.5x difference – one for each full magnitude: 2.5 x 2.5=6.25.

The screen grab above (source) is a typical star map. Underneath the main map, you can see a scale of magnitude one through six. You now appreciate that the magnitude one star is actually 100 times brighter than the magnitude 6 star.

The table below shows the change in brightness between stars with differences of 1, 2, 3, 4 and 5 magnitudes.

With that information, can you calculate how much brighter the full moon (magnitude -12.7) is than venus, the next brightest object in the night sky at magnitude -4.6?

So now you know how to translate magnitude information into observable brightness data, which will be helpful when reading sky-maps.

Distribution of Stars Based on Magnitude

There are more stars farther away from Earth than there are near it. It’s a pretty obvious statement, but important for one reason: there are far more dimmer stars than there are brighter ones in our night sky.

Here’s an example: there are 22 stars brighter than magnitude 1 in the night sky, however, at magnitude 2, you can see a total of 93 stars.

At magnitude 6, which is the dimmest magnitude our naked eyes can detect in the best conditions, there is a grand total of 8,768 stars! And, if you start taking pictures of stars, there are many, many more visible in your DSLR.

Learn more about how many stars we can see!

Obviously, not all of them will be visible at the same time from a single location, but these numbers give you a good idea of what’s there to see!

If you’re interested and would like to dive a bit more into this, stargazing.net has a detailed table showing the distribution of stars according to apparent magnitude. Their full table covers stars from magnitude -1 all the way up to magnitude 20. In the table below we’ve exerted the list covering magnitude -1 to 6.

Distribution of Visible Stars Based on Magnitude

Note: these numbers are stars visible in the whole sky. Of course, wherever we stand on the earth surface we can only ever see half of the sky at a time. So the maximum number of stars you can see above your head is around half the number in the table.

Light pollution has a huge impact on the range of magnitudes you can see.

Stars like Spica and planets like Venus are visible even in substantial light pollution. However, since most stars are relatively dim, you won’t be able to see as many of them in even low amounts of light pollution.

Nothing beats a dark sky site for the best views of the night sky. But, if you have to observe under a polluted sky – as many of us do – even a slight decrease in the amount of light pollution you suffer can mean a big improvement in the number of objects you see.

Finally, to improve the magnitude of objects open to you, i.e. to see fainter objects, go back to the dark sky map and find a location nearby with lower levels of light pollution. the Bortle scale will show you what extra objects you can enjoy from the new location.

How Telescope Aperture effects the Stellar Magnitude We Can See

Although theoretically your eyes can see objects as dim as magnitude 6, that’s rarely the case in reality. Light pollution reduces, often severely, the brightest objects we can see.

Telescopes (see this year’s best) show us objects too faint for our eyes – they increase the range of magnitude we can see, but only up to a certain limit.

The bigger the aperture, the fainter the object we can see. A telescope with a 10-inch aperture might show us objects as faint as magnitude 14, which would reveal Pluto to us at its brightest.

To find out what your telescope’s limiting magnitude is (i.e. the faintest magnitude you can theoretically see with it) use this apparent magnitude calculator.

Remember though, light pollution also affects what your telescope will reveal to you. It’s theoretical faintest magnitude might be 14, but the reality may be as bright as magnitude 9 or 10 in an urban location.

If you live in a city, read our guide to urban astronomy.

So far we have learnt about the basics of magnitude, how to translate magnitude information to brightness, and number of stars visible at each step of magnitude.

But it’s interesting and useful to have an idea about the magnitude of commonly encountered objects, such as planets and major stars. Here we have compiled a list of some of them, curated from Wikipedia’s much larger list of such objects.

Summary of Magnitude in Backyard Astronomy

Now you know pretty much all there is to know about stellar magnitude, a topic that is confusing for many astronomers that are just starting out.

To sum it up briefly, there are two measures of magnitude, apparent magnitude and absolute magnitude.

From earth, we astronomers use apparent magnitude, which is a way of measuring how bright objects in space appear to us. This is the basis of all the star maps you’ve used and the measure of the ‘limiting magnitude’ of your telescope.

Absolute magnitude, on the other hand, is a measure of an object’s intrinsic brightness or luminosity. It is the brightness of an object if it were being observed from a distance of 10 parsecs.

As astronomers, we do not use absolute magnitude. So, when someone at your local astronomy club – or here on this website – talks about ‘magnitude’, they mean apparent magnitude.

We have seen that a magnitude change of 1 represents a change of 2.5 times in brightness. For instance, Mercury at magnitude -2 is two-and-a-half times brighter than Sirius, which shines at magnitude -1.

As a bonus for reading to the end, here’s a link to the International Astronomical Union’s list of sky charts for all 88 constellations, with magnitude scales for each one.

With your newfound knowledge, go out there and have even more fun in your stargazing sessions. And keep loving the night sky! 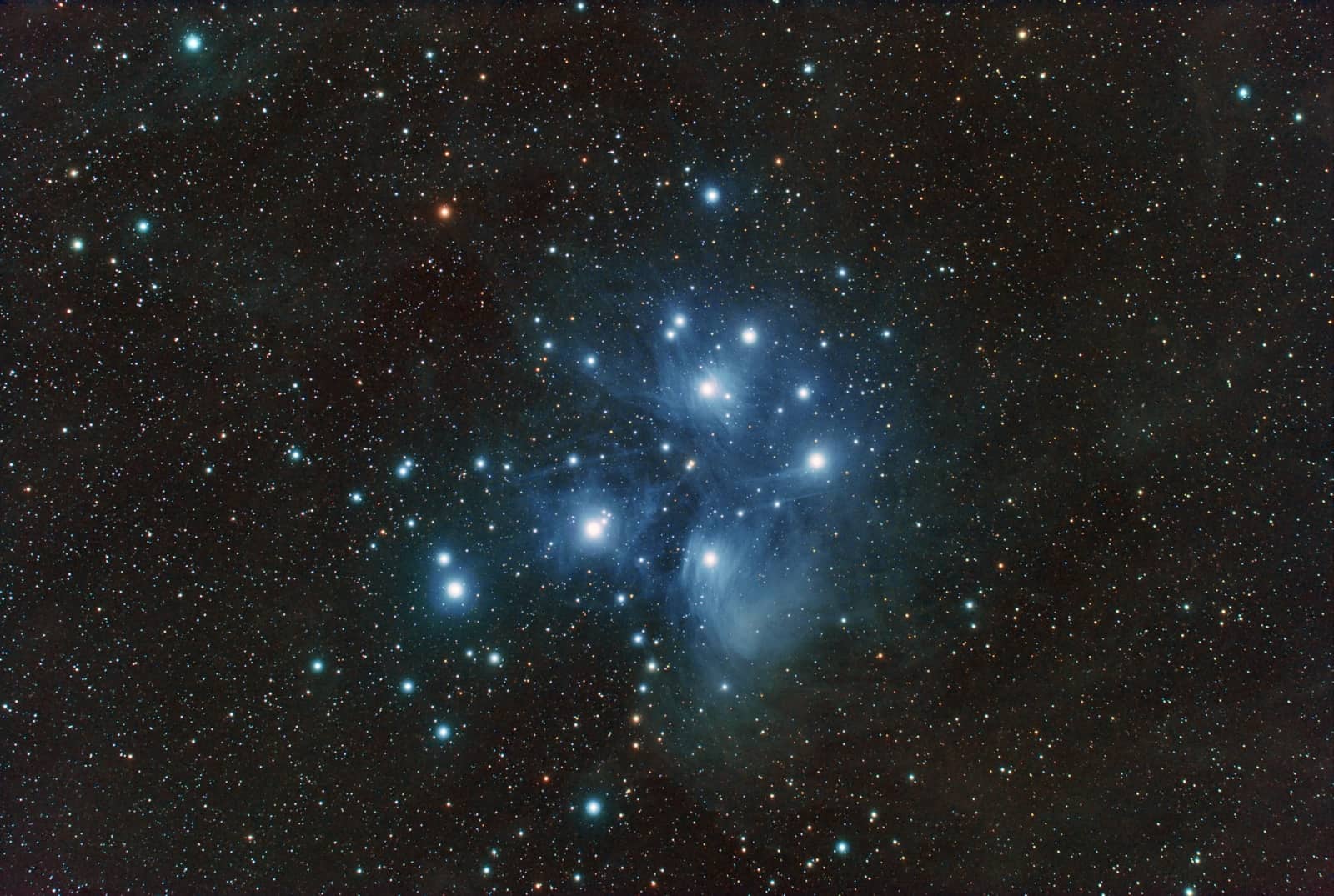 What Color are Stars? The Astronomer’s Guide to Seeing a Stellar Rainbow