What is Planet Mercury Made of, and How Big is it?

By Adam Kirk
|
6 minutes
Home »Astronomy »What is Planet Mercury Made of, and How Big is it?

Mercury is the swiftest, smallest, and nearest planet to the Sun in our solar system.

It is called a ‘terrestrial’ planet because it has a rocky surface, just like Venus, Earth, and Mars. It has neither a moon nor a ring system.

A year on Mercury is just 88 Earth days — that’s how fast the planet takes to complete one revolution around the Sun. It was named ‘Mercury’ for this very reason because Romans thought of it to be the messenger of their gods that could travel from one place to another speedily.

Mercury is only 36 million miles (58 million km) from the Sun, and its proximity means that the Sun looks three times bigger and 7 times brighter when seen from Mercury’s surface as compared to Earth’s.

With a 1,516 miles (2,440 km) radius, Mercury is only slightly larger than Earth’s moon. A well-used analogy to explain the similarity is: ‘If Earth were the size of a nickel, then Mercury would be a blueberry’s size.’

Mercury is much heavier than the Moon because of its iron content. However, there are more similarities between them, as we will learn in this article.

The first planet in our solar system is also shrinking, why is that? And what does it mean for the planet’s future?

Let’s take a look at what is happening with this tiny planet, and why.

What is Mercury Made Of?

Mercury has a similar structure to Earth. It is made of a large core, mantle, and crust. Chemically, it is composed of a silicate crust and mantle and an iron core.

Mercury is the second densest planet in our solar system. Similar to Earth, Mercury has a dense, partly molten metallic core of about 1,289 miles (2074 km) radius — so huge that it fills 85% of Mercury’s radius.

The outer shell — a mantle and a crust – takes up the remaining 250 miles (400 km). Above that is a thin, practically non-existent atmosphere.

Mercury’s core is so thick that there is little space for plate tectonics to occur. The planet instead has one plate, unlike Earth which has multiple plates that constantly collide and pull apart.

NASA’s Messenger probe detected fault scarps on Mercury’s surface. These look like cliff edges and are several miles long but only dozens of feet deep. Fault scarps are caused when the planet’s surface contracts due to cooling.

Scraps this small and young are usually erased due to constant meteorite bombardments, but the fact that they aren’t being erased on Mercury suggests that the planet’s processes aren’t replenishing them.

The process of cooling that forms the scarps is also believed to responsible for ‘mercury quakes’, which could register as high as five or six on the Richter scale.

Volcanoes too are not uncommon on Mercury, but they are not the explosive kind that occurs on Earth.

Volcanic activity is believed to have been triggered by a meteorite impact that formed the Caloris Basin. Lava did not erupt out of a volcano, but rather seeped into the planet’s surface, forming smooth plains. These are called shield volcanoes.

Mercury’s crust is made of solid silicate and is 22 miles (35 km) thick.

Deeper yet is an outer core, possibly of iron sulfide.

Next is a layer of liquid surrounding a solid inner core. This core makes up 55% of Mercury’s volume and has a higher iron content than any major planet in the solar system.

Does Mercury Have a Magnetic Field?

Yes, Mercury’s magnetic field is created by the dynamo effect in its core.

As the planet spins, the liquid surrounding the core is swished around in the direction of its spin. Each molecule in that liquid is magnetized, and together a global magnetic field is created around Mercury when the liquid spins along with Mercury.

This is the working of the dynamo, which is present inside Earth as well.

However, Mercury’s field was as strong as Earth’s billions of years ago but is now 150 times weaker.

Scientists believe that Mercury’s proximity to the Sun (just 58 million km) exposed it to incessant solar winds which counteracted the dynamo effect and lessened its field’s strength.

How Big is Mercury?

To put this into perspective, this is equivalent to the width of the US. If you were to put three Mercury(ies) side by side, that would fill Earth from end to end.

You’ll notice that the tiny Mercury is almost as dense as Earth. This is due to its dense core that fills 85% of its radius.

Yes, the solar system’s smallest planet is getting tinier.

Since the solar system’s birth 4.5 billion years ago, Mercury has shrunk by 11 km. But why is it shrinking?

All planets, after their formation, begin cooling and radiating heat into space. The same is the case with Mercury, whose liquid iron core began solidifying, slowly taking up less space, leading to shrinkage in Mercury’s overall volume.

The crust too has shrunk, and the evidence is present in ridges on the planet’s surface, the scarps we talked about earlier.

Both Mercury’s and the Moon’s surfaces are dotted with craters. An image from NASA’s Messenger spacecraft shows just 172 miles (276 km) of Mercury’s surface, but it is dotted with 763 craters!

Craters are helpful for scientists to deduce the age of the surface: the greater the number of craters, the older the surface is. Mercury does not recycle its surface due to the lack of tectonic activity. Its craters range from 328 feet (100 m) to 808 miles (1,300 km).

What Color is Mercury?

A planet’s color is created by the amount of sunlight that their surface and their atmosphere reflect. To the naked eye, Mercury’s color is dark gray due to the silicate rocks and dust on its surface. With sophisticated instruments, the minerals and chemicals are highlighted, giving Mercury lots of color.

Mercury, the smallest planet in our solar system, is also the swiftest. At a distance of just 38 million miles from the Sun, it completes one revolution in just 88 Earth days and is tricky to observe from Earth.

Mercury’s structure is similar to Earth’s: a core, a mantle, and a crust. But Mercury’s core is so huge that it occupies 85% of its radius.

This is also the reason why despite Mercury’s tiny size, Earth’s and Mercury’s density are roughly equal. While scientists believe that Mercury once had a magnetic field whose strength was equal to Earth’s, the present-day Mercury’s field is 150 times weaker.

There is also evidence that the planet itself is shrinking by cooling and contraction. Since 4.5 billion years, Mercury has shrunk 11 km. Even the crust has wrinkled, which is seen in the ‘scarps’ on the planet’s surface.

Mercury is dotted with craters. These are not erased over time like they are on Earth because there are no tectonic plates to cause recycling. This makes Mercury similar to the Moon in this aspect. Even its color is dark gray because of the silicate rocks and dust on its surface.

The tiniest and fastest (not the hottest) planet in our solar system is a world of its own, and sophisticated missions with complex instruments are slowly unwrapping the planet’s mysteries, of which there are many.

Enjoy remembering all of these points when you view Mercury through a telescope. 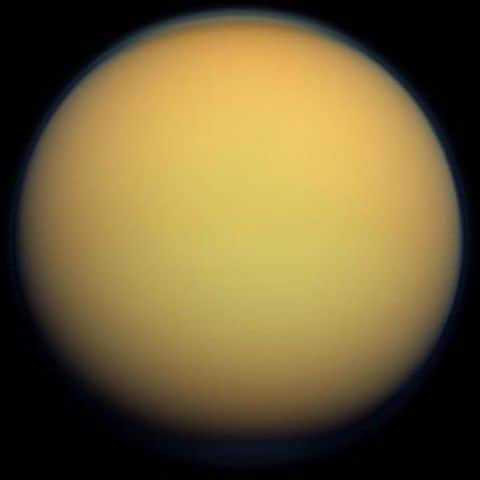 Titan: Saturn’s Largest Moon – Everything You Need to Know