What is the Moon Made of?

By Sharmila Kuthunur
|
5 minutes
Home »Astronomy »What is the Moon Made of?

At its simplest, the Moon is made of a crust, a mantle, and a core which are composed of elements similar to those found on Earth. The similarity comes from the fact the Moon formed from a part of Earth itself.

But the Moon is also different from Earth in so many ways. It’s more than the smooth, shiny surface we see from Earth.

How do we know so much about the Moon?

Let’s take a look at the lunar world.

How Was the Moon Formed?

Quick Answer: The Moon formed from the debris caused by a Mars-sized object colliding with Earth 4.5 billion years ago.

4.5 billion years ago, an asteroid the size of Mars collided with Earth. The debris that resulted from this collision — both from the asteroid and Earth, combined to form the Moon that we see today.

This early Moon remained in a molten state for nearly 100 million years, after which it began crystallizing.

Dense iron and nickel sunk toward the Moon’s core, where they formed the Moon’s dynamo, a mechanism through which the rotation of the core’s constituents produced a magnetic field until 2.5 billion years ago.

However, the Moon’s dynamo has cooled down and does not produce a significant field. Lighter elements floated on top and materialized into the lunar crust.

The Moon hasn’t changed much since that time. Meteorites regularly pound on the lunar surface, as a result of which we see the layer of dust and grains known as regolith.

What Is The Moon’s Surface Made Of?

The Moon’s surface is battered with craters created from asteroid impacts — impacts that occurred rapidly early in the Moon’s formation.

This heavy bombardment ceased 3.8 billion years ago, but the craters continue to exist even today.

When these impacts occurred, the Moon was still cooling from its formation. As a result, the cracks created by the impacts oozed lava from underneath the surface and into the craters where it cooled and hardened.

The iron in the lava makes the regions appear dark — a feature that humans mistook as seas and named them ‘maria’, which is Latin for sea.

Unlike Earth, the Moon has no weather to erode craters or plate tectonics to ‘recycle’ the land. This is the reason why the Moon’s surface has stayed largely unchanged in its appearance for millions of years, save for footprints and space craft of the moon landings.

The fine layer of rock that rests on the lunar surface, called regolith, is broken into finer particles by meteorite impacts. This regolith is nearly 10 feet deep, below which lies a crust of 42 miles or 67 km.

What’s Beneath the Surface of the Moon?

Quick Answer: The Moon’s crust, mantle, and core lie beneath its surface.

Underneath the mantle lies the Moon’s core, which is 420 miles (675 km) wide and contributes to 2% of the Moon’s mass.

This core is rich in iron and has smaller quantities of nickel present.

How Do We Know So Much About the Moon’s Composition?

Quick Answer: Manned and unmanned missions to the Moon have provided us with much knowledge about its composition.

The Moon is our closest celestial neighbor, and astronomers have been looking at it for centuries.

The Italian astronomer Galileo Galilei was the first astronomer to observe the craters or holes as he called them, on the Moon’s surface.

The Soviet Union was the first in the race to fly robots to the Moon in 1959. Their missions revealed that the high number of maria on the near side are shockingly absent on the Moon’s far side.

The US joined the race in the 1960s, and NASA began a series of hard landings with the Ranger missions whose purpose was to take as many pictures as possible of the lunar surface before crashing. The composition of craters and regolith was discovered.

The US Surveyor 1 spacecraft soft-landed on the surface and returned data about the soil’s chemical composition.

In the 1970s, NASA sent robotic missions on the lunar surface for a dry run in preparation for manned missions.

These missions discovered that the lunar surface is not as smooth as it looks from Earth. In fact, regolith was found to cover the entire surface.

When astronauts visited the Moon in the 1970s, they brought back 328 kgs worth of lunar rock and soil to Earth, where they were analyzed in greater detail.

Since then, there have been other robotic missions to the Moon that keep adding to our knowledge. At this point, we know more about the Moon than Earth’s oceans.

The Moon is a fascinating place to view and visit, and not just because it is our closest neighbor in space. The Moon’s past is deeply intertwined with that of Earth’s, which is why both have similar chemical makeup and structure.

The Moon may not have active tectonic plates, but its structure is similar to Earth’s in its division of a core, a mantle, and a crust.

The Moon is only a couple of days’ journey away in a spacecraft, so there have been many, many robotic missions, both failed and successful ones. Those, along with the six Apollo manned missions have provided us with in-depth knowledge about Earth’s faithful satellite. 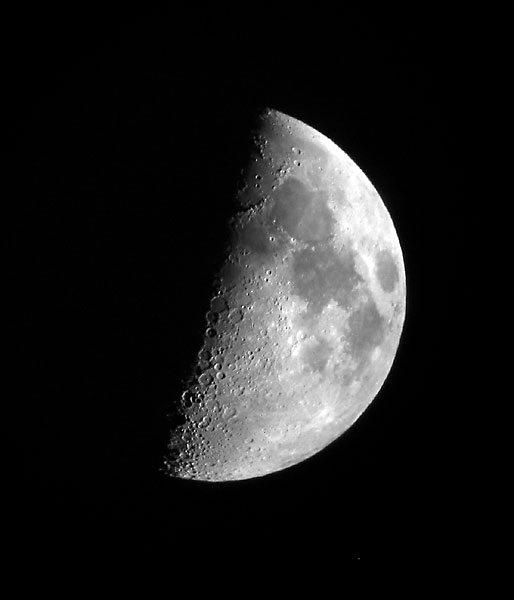 How Did the Lunar Maria Form?