Where Does The Sun Rise and How High Does It Get?

By Sharmila Kuthunur
|
7 minutes
Home »Astronomy »Where Does The Sun Rise and How High Does It Get?

Every day, the Sun rises and sets. But where does it rise exactly, and how high does it get?

The broad answer to all these questions is: it depends on the time of year.

Let’s take a deeper look at why the Sun doesn’t always rise exactly in the east and how to calculate the highest point it reaches in the sky. We will then learn what an analemma is, and why it looks the way it does.

Does the Sun Always Rise in the East?

Earth’s equator is the only place where the Sun rises exactly in the east. All other places witness this only on two occasions each year.

We’ve all heard that ‘the Sun rises in the east and sets in the west’ but this statement is scientifically accurate for only two days of the year: the spring and fall equinoxes.

You may have read that the Sun always rises due east and sets due west on the equator, but this is not the case. There is indeed the least variation in where on the compass the Sun rises at the equator, but there is still some change throughout the year.

On the dates of the equinoxes, which are around 20 March and 22 September each year, the Sun rises due east and sets due west everywhere on the planet.

(The exception to this rule is found near the poles. At the spring equinox, the Sun doesn’t set at the north pole and doesn’t rise at the south pole. The opposite is true at the fall equinox.)

This happens because Earth is tilted at 23.5 degrees to its orbital plane around the Sun. From March to September, the northern hemisphere is tilted more towards the Sun and, from September to March, the southern hemisphere faces the Sun.

The equinoxes mark the crossover points between the north and south hemispheres facing the Sun. On 20 March and 22 September, the Earth is aligned perfectly parallel to its rotational axis, which means it is not tilted with respect to the Sun, i.e. neither north nor south is tilted towards the Sun.

How Far From Due East Can The Sun Rise?

On the 363 days of the year which aren’t equinoxes, the Sun rises at either north or south of due east. The distance from due east increases each day until the solstice (which are around 21 Dec and 21 Jun).

In the northern hemisphere (ignoring the effect of the arctic circle, which we’ll come back to shortly), sunrise travels north from the December solstice to the June solstice, crossing due east on the March equinox.

From the June solstice to the December solstice, sunrise travels back south again, crossing due east once more on the September solstice. The opposite is true in the southern hemisphere.

The maximum distance away from due east experienced on the solstice dates varies with latitude. The further north or south you are, the further away the Sun will rise from due east or set from due west.

In the table below, we’ve shown where the Sun rises and sets for each latitude from the equator (0°) to the north pole (90°N) in ten-degree increments. We’ve shown this for the Equinox days and solstice days.

The measurements in the table are compass degrees from due north. To help read the table, remember that on a compass:

What this clearly shows is that the closer you are to poles, the further the Sun rises from the east at the solstice. In fact, if you’re over 60°N, the Sun rises south of southeast at the winter solstice and north of northeast in the summer solstice!

You may also question why the equinox measurements on not precisely 90° (i.e. due east) for all locations. This is mostly down to the timing of the equinox, which is a momentary event. If it happens late in the day on the 20 March, for example, then sunrise on 22 March may be closer to due east.

What Happens Inside the Arctic Circle?

When that happens, there is no sunrise because the Sun doesn’t cross the horizon at all.

You can see this in the table and it is more obvious at the solstices, which is when the Sun is always above or below the horizon, i.e. there is no sunrise or sunset.

How High Does the Sun Get in the Sky?

It is during summer that the Sun’s maximum position in the sky, which happens around noon, is closer to the zenith (the point directly overhead).

The Sun can only reach the zenith for latitudes up to 23.5° north or south of the equator. This corresponds to the tilt of our planet, as we saw earlier. On the solstices, the Sun is directly overhead at one of the tropics.

If you live north or south of the tropics, you will never see the Sun overhead.

How To Find The Maximum Height of the Sun

You can calculate the Sun’s maximum position no matter where you are on Earth.

You can find your exact latitude over here (we are using latitude instead of longitude because the daylight differs as you move north or south of the equator, not east or west of the meridian).

Because of Earth’s 23.5° tilt, the declination of the Sun is constantly changing, so we need to know what it is today.

Find out the Sun’s current declination on this website and make a note of it. It will be a negative number between September and March, and positive from March to September.

The Sun’s altitude for New York at the time of writing (Dec), was:

That means in New York, the Sun will reach a maximum of almost 26° degrees above the horizon at noon, which is just over 1/4th of the distance between the horizon and zenith.

In fact, wherever you are on the planet, the variation between highest altitudes of the Sun is 47°.

Did you also know that if you took a picture of the Sun at the same time every day for a year and combined them into a single image, you’d create a beautiful analemma?

Earth’s tilt of 23.5 degrees causes so many fascinating phenomena for us to witness and enjoy! The lengths of days and nights change as you move away from the equator, and so does where the Sun rises and sets, and how high it gets in the sky.

The further you are from the equator, the farther the Sun gets away from the east when it rises and the lower its maximum height in the sky. You can calculate that height as long as you know your latitude, for any day of the year.

Enjoy working out this information for your location! 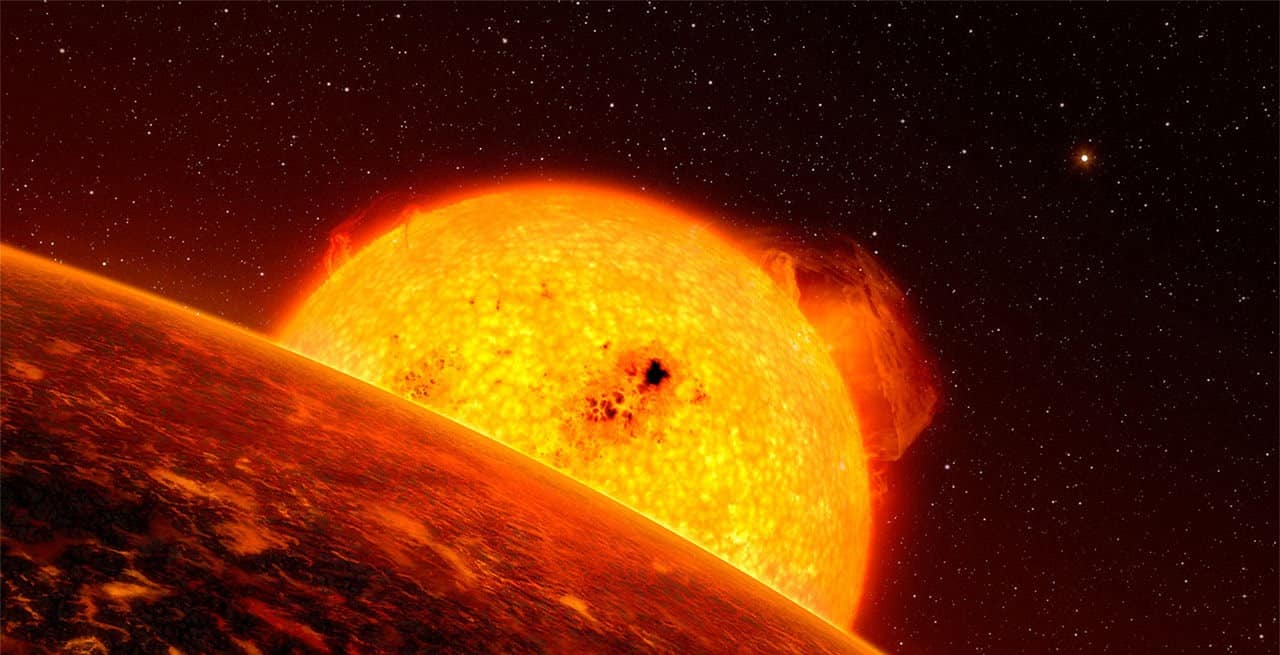 How Big Is The Sun?