Why Are Galaxies So Bright at Their Center?

By Adam Kirk
|
7 minutes
Home »Astronomy »Why Are Galaxies So Bright at Their Center?

When we look at the middle of a galaxy, whether through one of the best telescopes for deep space objects or in the stunning pictures of a magazine, like the one below, it’s easy to see that the center of a galaxy is much brighter than the rest of it.

Why should that be?

You might think it has something to do with the supermassive black hole found there, but you’d be wrong.

Black holes do not influence galaxies anywhere near as much as their fearsome reputation might suggest.

However, there is a link to that black hole, as we’ll soon discover…

Why Galactic Centers are the Brightest Part

The center of a galaxy is brightest simply because more stars are packed into this area. The Galactic Bulge, as it is known, contains millions more stars per cubic parsec than any other part of the galaxy. In extreme cases, stars in this region are just 5 light-days apart.

In the rest of this article, we’ll delve into why stars are more densely packed at the galactic center, what that density typically looks like, and how a few galaxies have an active galactic center.

Why Are Galaxies More Dense at their Core?

Let’s begin with looking at the connection between the supermassive black hole at the center of a galaxy and its brightness.

We saw in this article (opens in a new tab) that black holes form at the heart of a galaxy because that is where there is most material. The densest regions of gas are found here, due to the early influence of gravity.

Later in galactic formation, gravity is balanced by angular momentum, which is why galaxies are flat.

What we’re left with is a deep, dense heart of gas in the middle of a flatter, more dispersed disk of material.

It’s that dense gas area in the middle of the galactic disc which gives rise to both the supermassive black hole and the millions or billions of stars that form the ‘galactic bulge’.

These tightly packed groups of stars are commonly found in the center of spiral galaxies.

However, the galactic bulge itself can be either spiral-shaped (also known as disk-like) or elliptical.

What’s particularly interesting about the elliptical galactic bulge, which is also known as a classical bulge, is that stars within it orbit the galactic center in all planes, although most stars aren’t orbiting it at all.

The image below shows the orbits of six stars around Sagittarius A*, believed to be the supermassive black hole at the center of our galaxy.

This mix of orbits is in part due to the gravitational perturbations these stars inflict on each other due to how closely packed together they are.

As we move outwards from the bulge into the flatter parts of the disk, stars all uniformly rotate in (effectively) a single plane around the heart of the galaxy.

Inside disk-like bulges, the stars behave in the same way as they do in the rest of the galaxy, i.e. they all rotate around the center of the disk in the same plane.

How Dense are Stars at the Center of a Galaxy?

The black hole at the center of a galaxy is very, very small compared to the rest of the galaxy. Although it emits a staggering amount of energy, we don’t see the light from it at this distance without a lot of scientific effort and ingenuity.

What actually causes the center of galaxies to appear brighter is the dazzling light shining from millions of densely packed stars.

We already know of dense globular clusters, like M13, the Great Hercules Cluster, that earth-based telescopes can’t separate the stars inside because they are so densely packed

Bizarrely, despite this dense packing at their core, we know that galaxies are mostly empty space.

In our neighborhood, stars are roughly 4 or 5 light-years apart (0.2 per cubic parsec or one every 19 cubic parsecs), which is why we see this number of stars within one hundred light-years (opens a new tab).

Near the center of the Milky Way, we believe there to be 10 million per cubic parsec, i.e. it is 50 million times more densely packed!

And this is no exception…

That equates to a star between every 0.013 light-years in the Milky Way’s core, and every 0.008 light-years at the heart of M32. That’s the equivalent of having a star just three light-days away.

Our solar system’s closest star, Alpha Centauri, is four light-years away. If it were just 14 times the distance of Pluto from the sun, (i.e. three light-days away) it would shine at magnitude -13.7, which is brighter than the full moon.

Sticking with Alpha Centauri as an analogy, it’s been estimated that the luminosity of the central ten light-years of our galaxy is the equivalent of ten million suns. Imagine having four million suns packed into the space between us and our nearest star!

It would be dazzlingly bright.

This leads to our next question…

Why Don’t We See the Center of Our Galaxy As Bright?

The galactic core is so bright that, even at our distance of 27,000 light-years from it, we should see it glowing across a significant part of our sky at magnitude zero, but we don’t.

The reason we don’t see the Milky Way’s galactic core shining brightly is dust. There is a lot of space dust between us and the core in our line of sight and this absorbs a lot of the visible light.

When we peer at it in other spectral wavelengths, like near-infrared, gamma-ray, and infrared, the dust doesn’t obscure so much energy. We can see just how bright the central portion of our home galaxy is.

Despite what we’ve said so far, not every galaxy’s bright core is due to stellar density. Some galaxies have what is known as an active galactic nucleus instead.

An active galactic nucleus (AGN) is one of the brightest objects in the universe.

These are areas in the heart of some galaxies, which, as the name suggests, shine much brighter in part of the electromagnetic spectrum than we’d usually see.

AGN’s are not stellar in origin but are thought to be due to the accretion disc of the supermassive black hole at the center of the galaxy. Material in the disc is spinning so close to the speed of light that collisions are cataclysmically violent and emit staggering amounts of energy.

Most galaxies don’t have an AGN but those that do, like M87 in Virgo, are called Active Galaxies. Their core can outshine the rest of the galaxy in a particular wavelength.

Quasars can be so bright that they outshine the rest of the galaxy and they are an example of an active galactic nucleus.

The nearest one, however, is 600 million light-years away, so that’s not what we’re seeing in our backyard telescopes.

When we look at a galaxy through a telescope, we usually can only see the brighter core and not the extended field.

That core can be brighter in some wavelengths due to having an active galactic nucleus, but that is not usually in the visible wavelengths.

The bright, visible light our eyes and telescopes detect in the center of a galaxy comes from the staggering concentration of stars found there, which can be several million times denser than we’re familiar with in our region of space.

If you’d like to see a galactic core for yourself, check out our guide to telescopes for seeing galaxies. 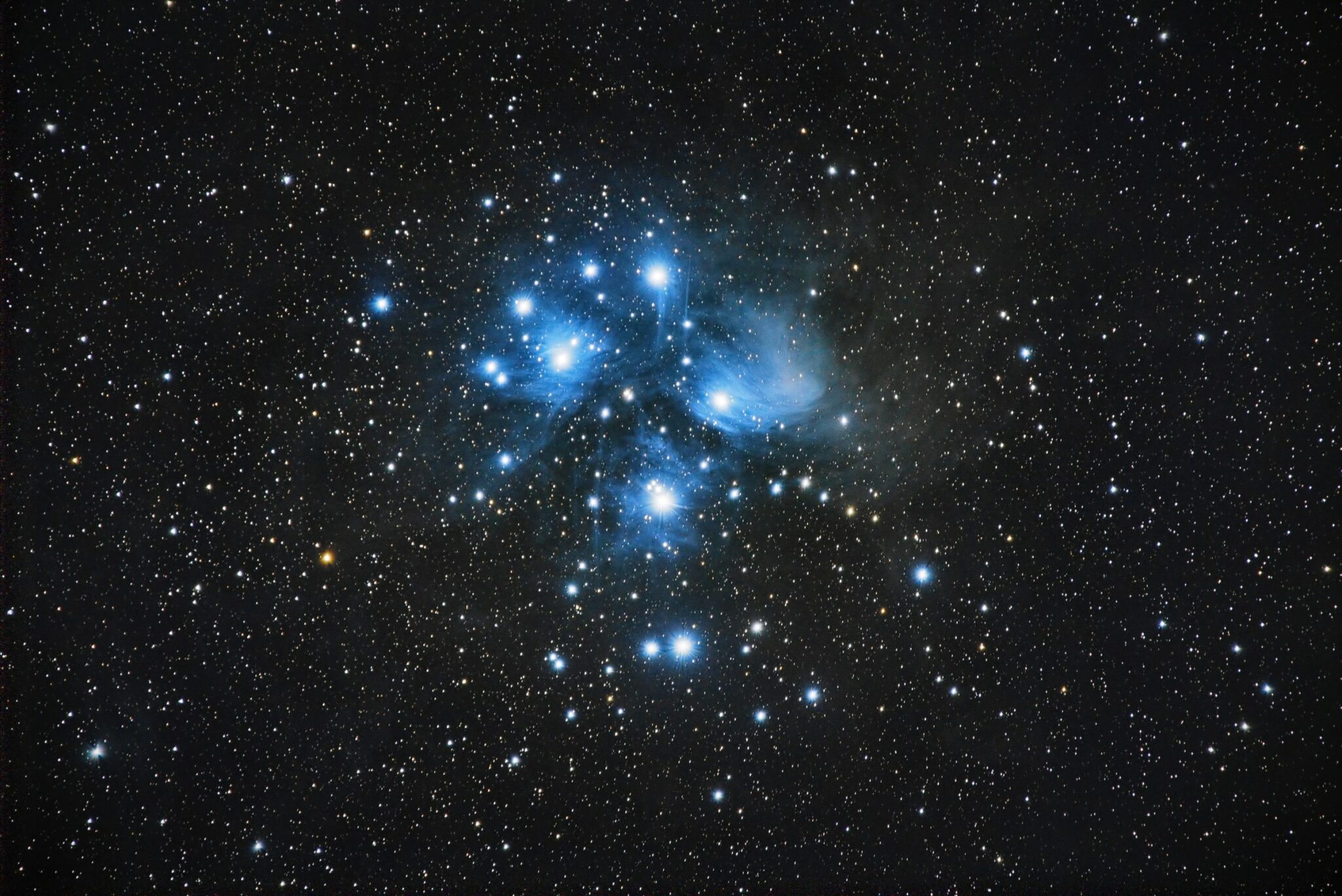 How to Find and Observe The Pleiades, M45