5 Vital Hand Shapes to Measure Angles in the Sky

How Can I Measure Distances in the Night Sky?

Measuring distances in the night sky can be a bit tricky. For novice astronomers, terms like arcminutes and arcseconds can as well as be a foreign language.

If you face such problems, you are in luck, my dear friend!

We here at Love the Night Sky have created this in-depth guide on how to use your hands as a convenient distance-measuring tool!

We’ll also cover a few vital basics that every astronomer need to know to help point your telescope in the right direction.

Astronomers measure angular separation of objects in degree(s) (º) . A full circle has 360º, and a quarter circle has 90º. Pretty simple, right?

The angular separation of horizon and the point directly above you (called ‘zenith’) is 90º. Halfway between horizon and zenith is 45º.

The full dome of sky each of us see is a hemisphere.

The angle from one horizon, through the zenith and on to the opposite horizon is 180º. The entire hemisphere can be mapped as a 180° X 180° grid.

If you use Stellarium or sky maps, you might be already familiar with this concept. Most of the measurements they use are in angles.

With that basic understanding, let’s discuss an easy and effective method backyard astronomers use for measuring angles in the sky: your hands!

Measuring Angular Distances in the Night Sky Using Your Hands

There are a variety of angles that can be measured by your hands. Here are a few:

Clench your fist. Now hold it up at arm’s length, with the back of your hand facing you. The width of your fist at this distance is about 10°. Easy, right?

Next, stretch your thumb and little finger away from each other (a handspan). This measures about 25º when held in the same manner as above.

Instead of your thumb, if you stretch your index finger (in a ‘YO’ manner), the span measures 15°.

For a smaller distance, hold your three middle fingers together at arm’s length. That covers roughly 5 degrees of sky.

The width of your little finger on its own is about 1º. However, take this with a pinch of salt as finger sizes vary greatly.

You might have guessed already that this system can be used to measure other angles too. For example, two 25° angles placed side by side measures 50°, and so on.

The reason these approximations work for everyone, old or young, tall or short, male or female, is because the size of your hands (and fingers) is proportional to the length of your arm. A handspan at arm’s length is roughly 25 degrees of sky for everyone!

However, it’s not perfect, but you can improve accuracy by calibrating your hands using a few known night sky measurements.

Calibrating Your Hand Angles With The Big Dipper

Standard distances in The Big Dipper (click to zoom)

For calibrating, we shall use the Big Dipper constellation.

Use the image as a reference, which you can click on to make it larger.

You can see that the spacing between the stars in this constellation offer simple ways of checking how closely your hand shapes match 5°, 10°, 15° and 25° against the night sky.​

Use this next time you’re outside with your telescope to get a sense of how to use your own hands effectively.

For example, if your own ‘YO’ shape doesn’t quite measure 15 degrees, move them away or nearer to your eyes until it does. Note how you are holding your arm and always hold it in the same way from now on to get a consistent and accurate(ish) measure.

This five minute video from David Fuller of ‘Eyes on the Sky’ gives a great tutorial to help you out:

Using Other Stars as a Sky Measure

The stars themselves can serve as handy yardsticks in the sky. For instance, The belt of Orion measures about 3 degrees wide. In the constellation of Leo, the distance between Regulus (at the bottom of the sickle) and Denebola (tip of the lion’s tail) is 25 degrees.

Measuring Less than 1° in the Night Sky

Let’s talk about arcminutes and arcseconds.

Angles less than 1 degree are measured in arcminutes. Each degree divides into 60 equal parts, called arcminutes. So, 1 degree is 60 minutes, and half a degree is 30 minutes.

This may seem too small to notice, but here’s a fun fact: as big as it seems, our moon only measures 30 arcminutes in the night sky!

How much do you think our sun measures?

Well, it’s the same: 30 arcminutes! This is why the moon covers the sun almost perfectly in a solar eclipse.

Some of the sights we’re seeking with our telescope are so small that we need to divide up the arcminutes into even smaller measurements. 1 arcminute is divided into 60 arcseconds. So, each degree has 3600 arcseconds.

Note that arcminutes are denoted by an apostrophe ( ‘ ) and arcseconds by double quotes ( “ ).

In the sky, jupiter is about 50” (arcseconds) in apparent diameter. A good telescope can resolve objects down to 1 arcsecond.

In Big Dipper, the star at the bend of the handle is Mizar, which has a fainter companion called Alcor. Together, they are known as the ‘horse and the rider’, and the ability to resolve these two stars can be used to test your own eyesight. They are about 12 arcminutes apart, and make a stunning visual spectacle through a good telescope.

If you are planning to use an equatorial mount, you will need to know your latitude. A simple way to instantly know your (approximate) latitude is:

Look out for Polaris (the Pole Star), which you can find using the Big Dipper – see the image below.

Using all that you’ve learned in this article, calculate the angular distance between Polaris and the horizon. The resulting angle is a good estimate of your latitude.

Now you’re comfortable using this simple technique to navigate the night sky, we recommend regularly using these hands gestures in your skywatching sessions. This way, you’ll soon be darting across the sky like a pro.

The next time you read a newsletter stating that “Jupiter will be seen 3 degrees north west of Moon”, you will know just the right place to look for it. 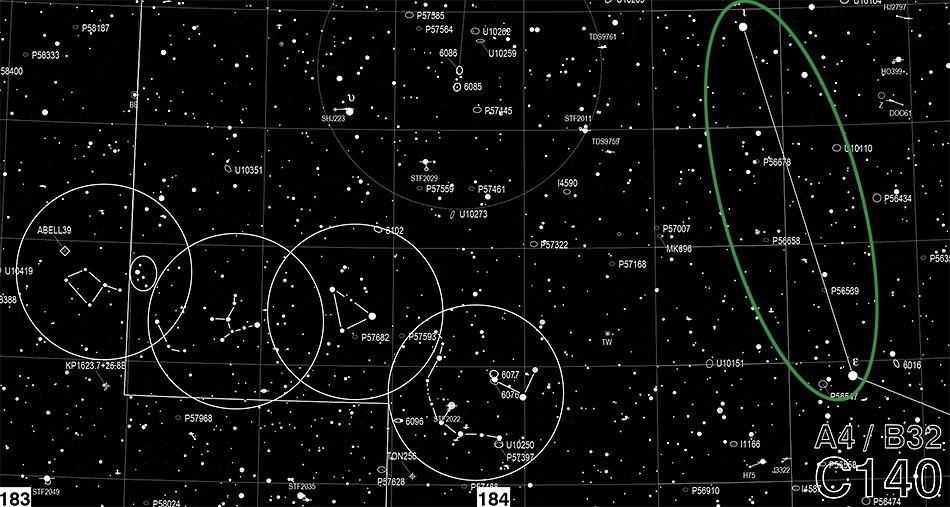 What is Star Hopping and How is it Useful for Backyard Astronomers?