Leo Constellation – A Lion in the Stars

In this article, we’ll be sharing with you everything you need to know about the constellation of Leo, including how to find it and deep space objects contained within it. We’ll also show you how to use it to find other night sky objects more easily.

The Constellation of Leo

Leo is the Latin word for ‘lion’ and the constellation of Leo is one of the few constellations that resembles its namesake, as you can see in the SkySafari screengrab below.

This makes it one of the easiest constellations to identify, which is probably why it’s also one of the oldest. It has been associated with a lion as early as 4000 B.C.

In Greek mythology, Leo was the Nemean lion that Heracles killed during the first of his Twelve Labors. Heracles also appears in the legend behind the constellation of Cancer.

To help you spot Leo in the night sky, here’s how SkySafari shows its brightest stars (to magnitude 5.0). Click the image to open a full-screen version.

As you can see, Leo is a large constellation. It has an area of 947 square degrees and is the 12th largest of the 88 recognized constellations. Leo is bordered by the constellations Virgo, Ursa Major, Coma Berenices, Crater, Hydra, Leo Minor, Lynx, and Sextans.

Many of us will recognize its famous asterism, the Sickle, which looks like a backward question mark.

If you’ve watched the annual Leonid meteor shower (peaks mid-November), you may also recognize the sickle as the location of this meteor shower’s radiant point.

The January Leonids (peak ~Jan 4) are Leo’s second annual meteor shower and also have their radiant in the northwest part of Leo.

In the next section we’ll discover how to find Leo.

How To Find Leo In The Night Sky

As one of the zodiacal constellations, Leo is found along the ecliptic. It is visible to observers at latitudes between +90° and -65°.

The best views are had in May when the Leo transits due south at 10pm and rides midway between the horizon and zenith. The image below shows the view from mid-USA in May at 10pm.

To find Leo, carry out a naked-eye hunt for the Sickle. Remember that it may be leaning on its side, depending upon when you are observing.

If you have trouble spotting Leo’s Sickle, you can star hop to this constellation from the Big Dipper. Connect the two outer stars of the Dipper’s bowl, Merak and Dubhe, with an imaginary line. Extend that line, (shown with the orange arrow in the image below) and the next bright constellation you’ll hit is Leo.

Similarly, an imaginary line from Megrez to Phecda (the Dipper’s inner bowl stars) points toward Regulus and Algieba, shown as a green arrow in the image. Regulus is Leo’s brightest star at the bottom of the Sickle.

The angular distance between Phecda and the middle of Leo is roughly 40o and you can use your hand at arm’s length to estimate this.

To find Leo’s exact position for your location on any night, use software such as Stellarium (free) or SkySafari.

We’ve already named the six stars in the sickle asterism, but Leo contains several other notable stars. The following list details the brightest, and they can all be seen on the SkySafari image below.

Located ~77 light-years away, Regulus is a quadruple star system composed of 2 binary star pairs. Regulus A is a blue-white main-sequence star with a white dwarf companion that can’t be observed directly.

Regulus B and Regulus C are 177 arcseconds from Regulus A. These dim main-sequence stars have magnitudes of 8.1 and 13.5 respectively. The ‘B’ star is within easy reach of a backyard scope, but ‘C’ needs a big telescope to reveal it.

Regulus, meaning ‘little king’ in Latin, is the closest bright star to the ecliptic and it is regularly occulted by the moon and occasionally occulted by Mercury and Venus.

Beta Leonis (Denebola) – At the end of the Lion’s ‘tail’ (from which its name is derived), Denebola shines at magnitude 2.1 and is the second brightest star in the constellation and the 61st brightest in the sky.

This relatively young main-sequence star is thought to be less than 400 million years old and is  ~35.9 light-years away. Denebola is a variable star and changes brightness over just a few hours but the period is unknown and the change can not be visually perceived.

It is 12 times more luminous and 75% more massive than our Sun.

Gamma Leonis (Algieba, Juba) – This double star in the Sickle has a magnitude of 2.0 and is ~130 light-years away.

This star system contains an orange-red giant and a greenish-yellow companion. They are both easily in the grasp of a beginner’s scope (link opens our best telescopes in a new tab) because the dimmest star shines at magnitude 3.6. However, they are separated by less than 5 arcseconds, meaning you’ll need decent magnification to split them.

Algieba is derived from the Arabic word for ‘the forehead’ but is also known by its Latin name Juba, meaning ‘mane’.

Delta Leonis (Zosma) – This white, main-sequence star has a magnitude of 2.6 and is ~58.4 light-years away. This star is 15 times more luminous than the Sun.

It is estimated that Zosma will become a red dwarf star in 600 million years. Zosma comes from the ancient Greek meaning ‘the girdle’ and is on the lion’s hip.

Theta Leonis (Chertan, Chort, Coxa) – This white main-sequence star has a magnitude of 3.3 and is ~165 light-years away.

While this star is 2.5 times more massive than the Sun, its estimated age of 550 million years makes it a much younger star.

Kappa Leonis (Al Minliar) – This binary star has a magnitude of 4.5 and is ~210 light-years away. The companion star is so faint and close as to not be a backyard astronomer’s target.

Al Minliar means ‘the muzzle of the lion’ in Arabic.

Omicron Leonis (Subra) – This double star has a magnitude of 3.5 and is ~135 light-years away.

Subra’s giant primary and main-sequence secondary stars orbit so close together than they can’t be separated with a telescope.

Eta Leonis (Al Jabbah) – This blue-white supergiant is part of the Sickle’s handle. It is an eruptive variable star whose magnitude varies from 3.5 to 3.6 with an irregular period.

A secondary star of unknown orbit is 0.1 arcseconds away from the primary star, but can’t be detected visually.

Zeta Leonis (Adhafera) -This giant star is part of the curve of the Sickle. It has a magnitude of 3.3 and is ~274 light-years away. Adhafera means ‘the curl’ in Arabic.

Mu Leonis (Ras Elased Borealis, Rasalas) – This is the second star in the sickle. It has a visual magnitude of 4.1 and is  ~133 light-years away.

Epsilon Leonis (Ras Elased Australis, Algenubi) – This bright, yellow, giant is the first star in the sickle and the fifth brightest star in Leo. It has a magnitude of 3.0 and is ~247 light-years away.

Rho Leonis – This binary star has a magnitude of 3.9 and is ~5,000 light-years away. The primary star is a blue giant and its companion is about 0.1 arcseconds away, meaning it can’t be observed in a backyard scope.

Iota Leonis – This binary star has a magnitude of 4.00 and is ~79 light-years away. Its component stars are also too close to together to be resolved.

Sigma Leonis – This blue-white star has a magnitude of 4.0 and is ~210 light-years away.

While not naked-eye visible, Leo does contain a few other famous stars.

Wolf 359 – This red dwarf has a magnitude of 13.5 and is 7.8 light-years away. Despite being the third nearest star to our Sun, Wolf 359 is too dim to be seen with most small telescopes.

Gliese 436 – This red dwarf has a magnitude of 10.7 and is 33 light-years away. Two extrasolar planets have been discovered in orbit around this star.

This open star cluster contains 50 stars and was cataloged by Philibert J Melotte in 1915.  With a magnitude of 1.8 and an angular size of 6° squared, this cluster is naked-eye visible in dark sky locations and is a great binocular (or small scope) target in moderately light-polluted areas.

The Leo Triplet – Together, M65, M66, and NGC 3628 are the Leo Triplet of galaxies. We’ve provided more information about each galaxy in the next section.

To find the Leo Triplet, imagine a line joining Chertan and Iota Leonis. Almost exactly midway along that line is the M65. Use the image below (click for full-screen) to see the relative positions of M66 and NGC 3628.

Now let’s look at what else can be seen within the constellation boundaries.

Objects To See Within Leo

In addition to its notable stars, Leo has an abundance of deep sky objects and many are suitable for small telescope owners.

M66 is distorted due to ongoing gravitational interactions with M65 and NGC 3628.

NGC 3628 – The last of the three triplet galaxies is an unbarred spiral of magnitude 9.5 and an apparent size of 11 x 3.4 arcminutes. We view it edge-on, which is why it’s cigar-shaped. This is the hardest of the three to see and is particularly difficult in a small scope.

These are the easiest galaxies to see for a new astronomer

In addition to being one of the easiest constellations to spot, Leo has an abundance of notable stars and deep sky objects.

Look for the Sickle in spring and enjoy the galactic wonders which this constellation has to offer. 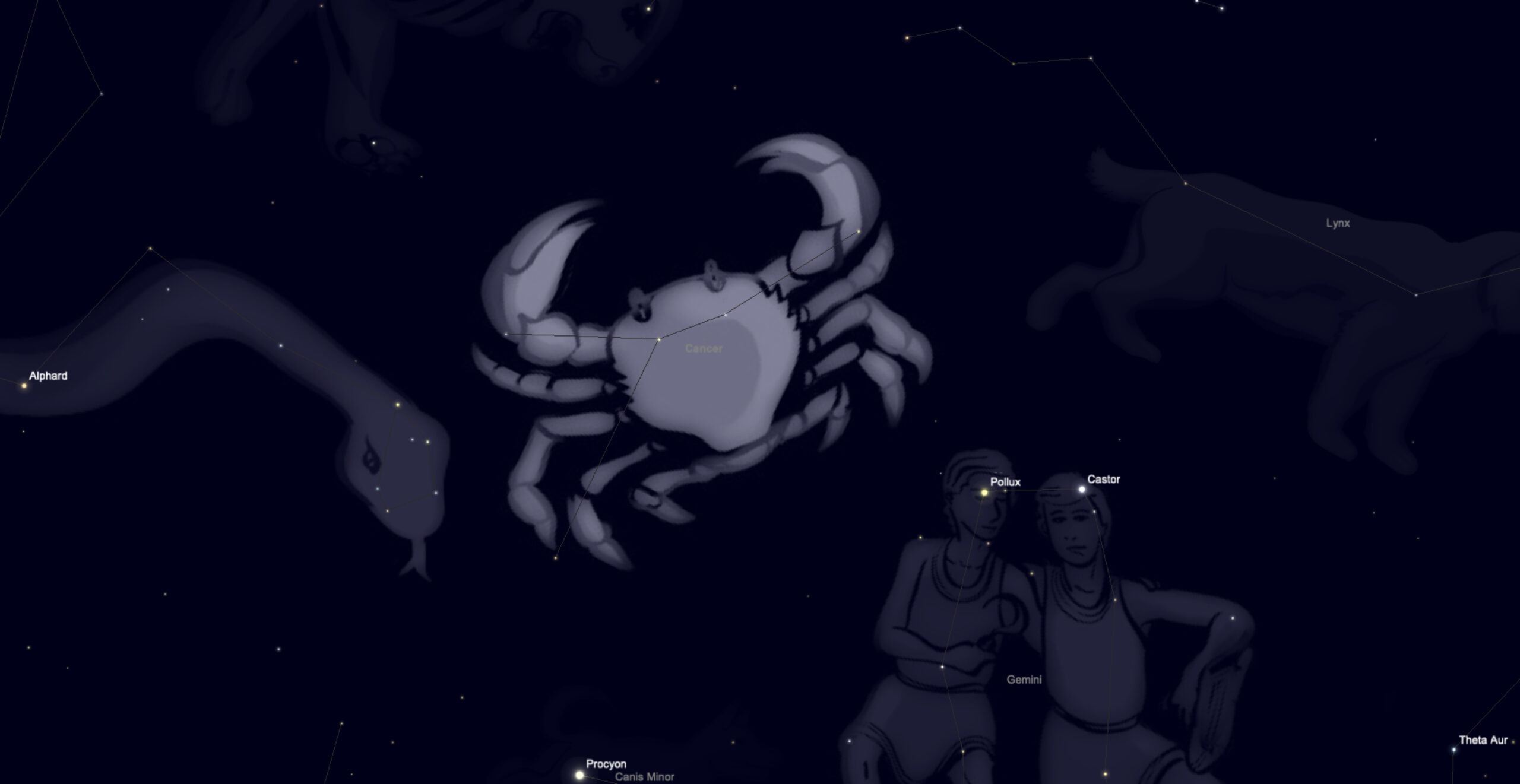 Cancer Constellation, the Astronomer’s Guide to the Crab in the Sky