Mars is the fourth planet in our solar system and the one that is being studied intensely because it is the only planet we know of that used to be most similar to Earth. However, with time, it turned into the dusty red planet that we see today.

In this article, we will learn about its atmosphere (of which very little remains today) in detail. Just like a tree’s rings tell a lot about the tree, understanding how Mars was in the past will help us know the planet better.

Does Mars Have an Atmosphere?

Yes, Mars has an atmosphere that is 100 times thinner than that of Earth’s. Its density is equal to the density found at 35 kilometers above Earth’s surface.

On Earth, we are used to seeing a blue sky. However, the Martian atmosphere has lots of dust particles suspended in its air, which is why it appears red to our eyes (hence the name “red” planet).

Moreover, if you happen to look at photos of Mars’ surface, you’ll notice there are many craters from asteroid impacts. This is because Mars’ atmosphere is so thin that it cannot shield the planet from incoming asteroids and comets.

What is Mars’ Atmosphere Made Of?

The atmosphere on Mars is primarily made up of carbon dioxide with trace amounts of nitrogen and other argon gases. Since there is no oxygen present in the Martian atmosphere, humans can not breathe its air.

The Martian Climate and Weather Today

The Martian climate has been studied in detail thanks to its closeness to Earth and the planet’s terrestrial nature.

Its climate and weather are similar to Earth’s in many respects: the presence of polar ice caps, seasonal changes, and predictable weather patterns. It is also different from Earth in the occurrence of dust storms and annular clouds.

What Temperature is Mars?

Mars orbits the Sun at 142 million miles (compared to Earth’s 93 million miles), so it is only natural to expect that the red planet receives a lower amount of sunlight than Earth.

Since its thin atmosphere cannot hold onto the little heat it receives, the temperatures on Mars range widely between -225 degrees Fahrenheit and 95 degrees Fahrenheit. To provide perspective, snow on Mars is not made of water, but frozen carbon dioxide!

In addition to the wide range of temperatures that Mars experiences, it also heats very quickly. This property, known as thermal inertia, changes during mornings and evenings, giving rise to a Martian breeze similar to what we experience here on Earth.

These breezes can get unpleasant very quickly when storms occur.

Martian storms range from the sizes of Earth’s storms to as large as engulfing the entire planet. Within an hour, wind speeds increase to nearly 17 miles per second! Amid the turbulence, particles from the surface are lifted nearly 100 km above it, where clouds form.

The picture above shows a global dust storm on Mars that engulfed the entire planet. The images, taken one month apart, show the drastic change in Mars’ appearance before and after the storm and how they obstruct our view of Martian surface features.

Both Mars and Earth have ice sheets at the poles. Mars has two permanent ice caps, which during the winter remain in continuous darkness.

Both planets appear to be losing their ice caps at an alarming rate. Scientists predict that at the current rate, the red planet may lose all of its polar ice within a hundred years.

Seasons occur when planets have an axial tilt. Earth’s is nearly 24 degrees, whereas Mars’ is 25.2 degrees. This indicates that Mars is expected to have seasons similar to those seen on Earth. It experiences the usual summer, winter, spring, and fall.

In addition to these, Mars’ highly eccentric orbit causes it to have two additional seasons not seen on Earth. The first one is perihelion, where the red planet is close to the Sun and receives 40% more sunlight than normal. The second is aphelion where water ice clouds form in its atmosphere due to extremely low temperatures.

Further Reading: How Many Moons Does Mars Have?

All planets, including Earth experience closest approaches to and furthest distances from the sun, know respectively as aphelion and perihelion. However, our thick atmosphere is so insulating that we don’t experience seasonal changes due to our distance from the sun.

In fact, when we are furthest from the sun, it is midsummer in the northern hemisphere!

Every year, roughly at the same time, clouds of the same doughnut shape appear above Mars’ northern hemisphere. Known as annular clouds, this is a seasonally recurrent cloud of approximately 1,000 miles in diameter. It appears in the Martian mornings and extinguishes by afternoons, only to appear the next morning again.

For nearly 400 million years after its formation, Mars, like Earth, had an atmosphere thick enough to support liquid water.

Its surface features (lake systems and terrains) suggest that Mars exhibited a warmer and wetter climate than what exists today. However, there is evidence that the atmosphere changed with time.

How Did Mars Lose Its Atmosphere?

Nearly 4.5 billion years ago, Mars’ magnetosphere (which is ideally supposed to help hold onto the atmosphere and protect the planet from asteroids and solar wind) shut off, for reasons not completely known.

Our best assessment is that it’s associated with the Martian core cooling and solidifying, which extinguished the magnetic dynamo effect. Learn more about what Mars is of.

Since then, Mars has been an armorless soldier in a warpath. And, as Mars has one third the gravity of Earth, it has additional problems holding on to its atmosphere.

Unfortunately for Mars, the Sun was also most powerful at that time and the constant stream of solar particles stripped the red planet of its atmosphere, leaving it an exposed and barren desert.

By calculating the rate at which isotopes escaped from Mars’ atmosphere, scientists hypothesize that nearly 99% of its original carbon dioxide and nitrogen gases were lost. Moreover, Mars is much lighter than Earth, and its gravity could not hold the atmosphere in place.

Could the Martian Atmosphere Have Supported Life?

Given the geological evidence that Mars once was warm enough to support liquid water, scientists believe that life might have existed in Mars’ past.

We have no idea what that life would have looked like because Mars’ atmosphere was primarily made of carbon dioxide, whereas Earth’s atmosphere has oxygen and nitrogen as its major gases.

Since the planet today is too cold, too dry, and does not have an atmosphere to support life, scientists are continuing to look for evidence of life in Mars’ past.

Although Mars looks dry and barren today, it was once a planet very similar to Earth. It once had an atmosphere thick enough to support liquid water on its surface, but the geologic evidence on its surface and analysis of gases from its atmosphere suggest that the atmosphere escaped the red planet over millenia.

Loss of its magnetosphere played an important role because, combined with weak gravity, Mars could no longer hold onto its atmosphere. Because of its similarity to Earth, scientists have hypothesized that life might have once existed on Mars when it was more habitable than it is today.

While the presence of life continues to be an open question, Mars is definitely a fascinating place with a rich history, which I am sure you’ll remember when you glance at it next time in the night skies! 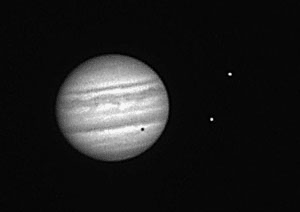 How Far Away is Jupiter?