Why Is Mars Red and What Is It Made Of?

By Sharmila Kuthunur
|
7 minutes
Home »Astronomy »Why Is Mars Red and What Is It Made Of?

Planet Mars is recorded as being seen in our skies as early as 4,000 years ago and has always evoked curiosity.

More recently, it has been under intense study and exploration, so much so that eight spacecraft are dedicated to Mars, with more on the way in 2022. All this is because Mars is the most similar planet in the solar system to our own, although Mars is much smaller than Earth.

One way that Mars is not similar to Earth is its reddish color, which gives it its famous name, the Red Planet.

What we want to find out today is what Mars is made of, and what contributes to its red color?

What Is Mars Made Of?

Mars formed nearly 4.5 billion years ago, around the same time that our solar system formed.

The red planet coalesced from the same cloud of dust and gas that formed other planets. While it started by fusing molten lumps of rock, it eventually became so huge that its gravity began attracting smaller materials, which it continues to do today.

Since chemical elements were distributed differently throughout the solar system during its formation, the place where Mars formed and the specific elements present there at the time played a major role in the planet’s composition.

Mars’ place in the system is in the inner, hotter area where metallics and silicates are in abundance, which is why Mars is called one of the four terrestrial planets along with Mercury, Venus, and Earth.

Its rocky nature is reflected by the surface changes that volcanoes, winds, and crustal movement cause.

Like terrestrial planets, Mars is made of soft rocks that are composed of iron, magnesium, oxygen, and silicon. It has an innermost core made of iron, a silicate mantle, and a crust.

Mars’ crust is unique in its abundance of iron, which is almost twice that found in Earth’s crust.

The pictures we’re used to seeing of the Martian surface show a planet with very little atmosphere covered with dust. Underneath this dust layer (which gets blown around in dust storms) is the planet’s crust, whose thickness ranges between 31 miles and 78 miles.

Unlike Earth, planet Mars lacks tectonic activity, which is why its entire crust is thought to be in one piece.

In addition to oxygen and silicon, iron is dominant in Mars’ crust with lesser amounts of magnesium, aluminum, and calcium. All of these are elements that form from the crystallization of magma, hinting that Mars is an igneous planet.

The features of Mars’ crust hold secrets to its evolution since the activities on its surface reveal what happened on the red planet in the past.

It is theorized that the bulk of the Martian crust formed early, within the first billion years into Mars’ formation. Its features can broadly be categorized into two types: the southern highlands that are heavily cratered, and the smoother northern lowlands.

Although Mars is not tectonically active and its entire crust is thought to be in one piece, it does not reveal a uniform thickness. The southern crust is thicker than the northern one.

The mantle is immediately below the crust and is the area that triggers hot plumes that are seen on Mars’ surface. The once active volcanoes on the surface hint at convection in a partially molten mantle.

The solid Martian core is between 1500 km to 2100 km in radius and is dominated by iron and sulfur at the planet’s center.

Composition and Features Of the Mantle

Mars’ mantle consists of not one, but a heterogeneous collection of chemical and mineral elements that melted to result in a mantle nearly 4.5 billion years ago. Its primary elements are silicon, iron, magnesium, and oxygen.

Composition and Features Of the Core

Mars’ core, like Earth’s, is thought to be partially liquid. This occurs when the planet has cooled by dissipating the heat from its formation, but not cooled enough to result in a completely solid core.

The Sun exhibits a gravitational pull on Mars. Scientists studying how liquid the Martian core is measure the amount of bulge on the far side of Mars, i.e. the side not facing the Sun, to see how much the core shifts.

They noticed that this was less than one centimeter, which meant Mars has a partially liquid core with solid iron at the center.

Although Mars was thought to be inactive, recent evidence is shaping the red planet to be geologically active. The planet’s geology can be understood by volcanoes, the presence of water and ice, and tectonic activity.

Even the fourth largest volcano on Mars is four times larger than the largest on Earth, which is Mauna Loa in Hawaii. Volcanoes occur on Mars in regions where the mantle’s heat flow is abnormally high.

The first one is Tharsis that hosts three of the red planet’s largest volcanoes with two other active sites nearby. The second such region is Elysium that boasts a further three huge volcanoes.

Water and Ice on Mars

The most direct, visible presence of water on Mars is in the form of polar ice caps.

The ice cap at the Martian north pole usually consists of CO2-ice. However, in summer, the CO2 largely sublimes to gas, leaving behind small portions of water-ice. In the south pole, a tiny amount of CO2-ice persists.

Today’s Mars is believed to be largely tectonically inactive.

However, throughout Mars’ history and evolution, the planet has broadly been categorized into three major physiographic provinces, each of which has a specific tectonic characteristic and rock type.

The third province in the Tharsis Plateau that hosts the largest volcanoes in our solar system.

How Do We Know?

Spacecraft that orbit Mars send home a variety of pictures and data of the red planet. In addition to these visual clues, since traveling to Mars is cost and time consuming, scientists also perform Earth-based experiments to reconstruct Mars’ history.

See the Red Planet yourself: How to Observe Mars With a Telescope

One of these experiments involves utilizing Earth-based sulfur-iron alloys, similar to the one comprising Mars’ core.

Why is Mars Red?

This is the big question. From all we’ve learned about Mars, we can explain its biggest enigma: why the planet is red.

The iron that is abundant in Mars’ surface material rusts (oxidizes) as it is exposed to oxygen in the atmosphere. The resulting iron oxide gives rise to the planet’s reddish color, which is why it appears red when seen from Earth.

From the light that Mars receives from the Sun, its surface’s spectral properties are such that it absorbs the blue and green wavelengths and reflects the red, giving rise to a ‘red’ planet.

No, there is evidence that Mars, like Earth, once hosted huge amounts of liquid water.

With time, due to drastic climate change, the water evaporated, leaving Mars as the desert that we see today.

However, since Mars once hosted water, there was also an abundance of water vapor in its atmosphere. This vapor later provided the oxygen required to oxidize the iron on the planet’s surface, giving rise to its reddish hue.

We’ve learned that Mars, like all other terrestrial planets, has a one-piece solid iron core, partially molten mantle, and an iron-rich crust.

The red planet gets its name from the abundance of iron in its surface material that was exposed to oxygen in the atmosphere to oxidize.

While Mars is tectonically quiet, it hosts the largest volcanoes in the solar system!

Due to all of these reasons, and the fact that Mars is the only planet in the solar system that is most similar to Earth, it is the most investigated planet with numerous past, current, and future missions.

See if Mars is visible tonight and take a look for yourself. 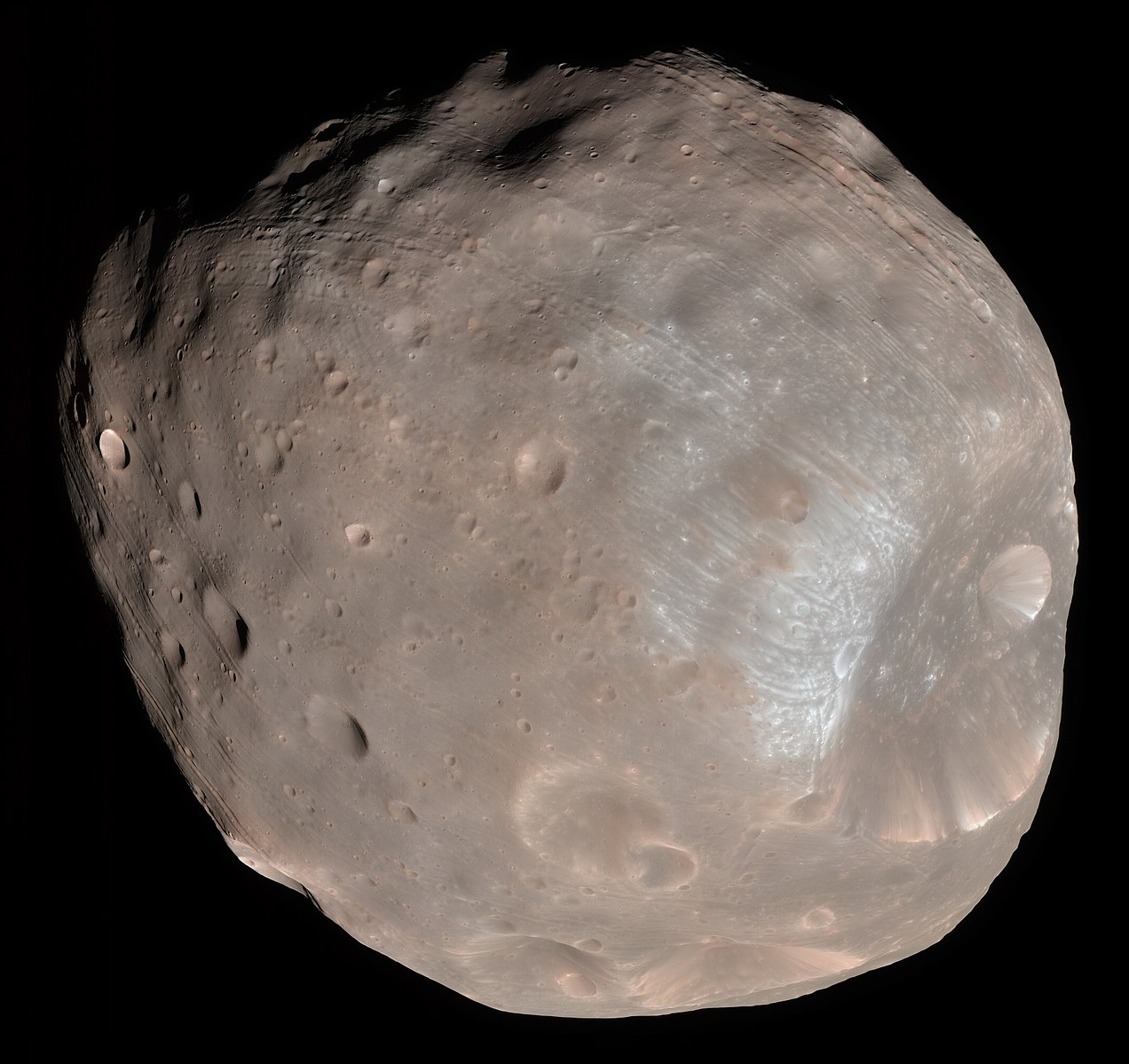 How Many Moons Does Mars Have, And Can I See Them With A Telescope?