What is Neptune Made Of, and is it the Windiest Planet in the Solar System?

By Sharmila Kuthunur
|
5 minutes
Home »Astronomy »What is Neptune Made Of, and is it the Windiest Planet in the Solar System?

Neptune is the fourth-largest planet in the solar system and orbits 30 times as far away from the Sun as Earth.

At this distance, the ice giant receives 900 times less sunlight than Earth does, yet Neptune’s atmosphere is fiercely active with storms, cloud patterns, etc.

What is Neptune made of, and what is it about its composition that drives this behavior?

How Big is the Planet Neptune?

How Many Earths Would Fit Inside Neptune?

It’s okay reciting raw numbers, but what does that look like in practical terms? Let’s calculate the number of Earths that can fit inside Neptune as measured by volume:

Therefore, Neptune is so massive that our planet could fit inside it 57 times over when measured by volume.

The table below shows a comparison of the mass, volume, and density to Earth’s. Note that the ice giant is significantly less dense than Earth, which is why it is only 17 times as massive (heavy), despite having 57 times the volume.

What is the Composition of Planet Neptune?

Neptune is made of three main layers: an iron-nickel core, a mantle, and an atmosphere. Neptune does not have a solid surface; the atmosphere leads the way to the superheated mantle.

Neptune’s core is made of iron, nickel, and silicates. Its mass is 1.2 times Earth’s mass, and the pressure is nearly twice that found at Earth’s center. The temperature here is 12,632°F or 7,000°C.

Neptune’s mantle is made of a hot, dense fluid of water, ammonia, and methane. This liquid is so dense that it contains 80% of Neptune’s mass. The temperature here is 8,540°F or 4,724°C.

Neptune’s atmosphere accounts for between 5% and 10% of the planet’s mass.

Above the troposphere lies a thin boundary called the tropopause, where the pressure is 0.1 bars.

Above it lies Neptune’s stratosphere, where temperature increases with altitude. Why this happens is still a mystery. Since it does not receive significant sunlight from the Sun, Neptune is likely to have some kind of internal heating source to compensate for the heat being lost to space.

The next layer is the thermosphere, a thin blanket with relatively low pressures at 10-5 bars.

The outermost layer is called the exosphere, mostly made of hydrogen, helium, and methane. This is also the layer that we see when we observe Neptune. This layer contains methane which absorbs red light from the Sun and reflects blue light into space, giving Neptune its color.

Neptune has a strange, lopsided magnetic field that is “tipped on its side” by 47 degrees. It is 27 times stronger than Earth’s field and is very likely driven by motions inside the planet’s mantle, just like Earth’s dynamo.

While Neptune’s field is odd, it is important because it is different from Earth’s and it challenges our basic understanding of how magnetic fields behave.

What are the Rings of Neptune Made Of?

Neptune has a total of six rings. All of them are made of ice particles and silicates. These elements are thought to have interacted heavily with radiation, which gave them a dark reddish color.

The rings also have a high amount of micrometer-sized dust suspended between moons and rocks.

Scientists speculate that these rings are younger than Neptune by less than a million years.

Is Neptune the Windiest Planet in the Solar System?

Remarkably, Neptune is the windiest planet in the solar system. Wind speeds reach over 1,300 miles per hour (2,100 km/h).

In addition to fierce winds, Neptune’s clouds are dynamic with changing patterns. A consistent cirrus cloud is called ‘Scooter’ because it circles the planet once every 16 hours, which is the length of a day on Neptune.

Another notable feature is the Great Dark Spot, a storm system in Neptune’s atmosphere that occurs every 4-6 years and contains winds blowing at speeds over 1,500 miles per hour.

What triggers these high wind speeds is not well known, since these phenomena are caused by high internal heat in other planets, but Neptune’s core does not radiate much heat.

What’s the Climate Like; Are there Seasons on Neptune?

Neptune’s climate can be described as supersonic wind speeds, huge storm systems, and seasons that last for decades.

Neptune experiences four seasons just like Earth. This happens because Neptune’s rotational plane is tilted by 29° to its orbital plane (Earth’s tilt is 23.5 degrees). Due to this axial tilt, one hemisphere of the planet receives more sunlight than the other, depending on where it is in its orbit. This gives rise to seasons.

However, unlike Earth where seasons last only for a few months, Neptune’s seasons last for 40 years each because the planet takes 165 years to orbit the Sun.

The sunlight Neptune receives is 900 times dimmer than Earth’s. Yet, even that tiny amount of energy is strong enough to brighten Neptune’s cloud bands during spring.

However, it does not warm the atmosphere significantly, because the temperatures hover around -400°F (-240°C).

Why is Neptune Blue?

Neptune’s atmosphere consists of hydrogen, helium, and methane. Although methane is only 1.6% of the total atmospheric elements, it absorbs red and infrared light from sunlight and reflects blue light. This gives Neptune its blue color.

The Sun’s most distant planet, Neptune, is 3.9 times larger than Earth and 17 times heavier.

It is home to the strongest winds in the solar system, blowing at supersonic speeds reaching 1,300 miles per hour. As well as being windy, Neptune’s atmosphere contains the chemical methane which leads to Neptune’s blue color.

Neptune would be an odd yet fascinating place to live if we could wrap our heads around the fact that its seasons last for 40 Earth years. 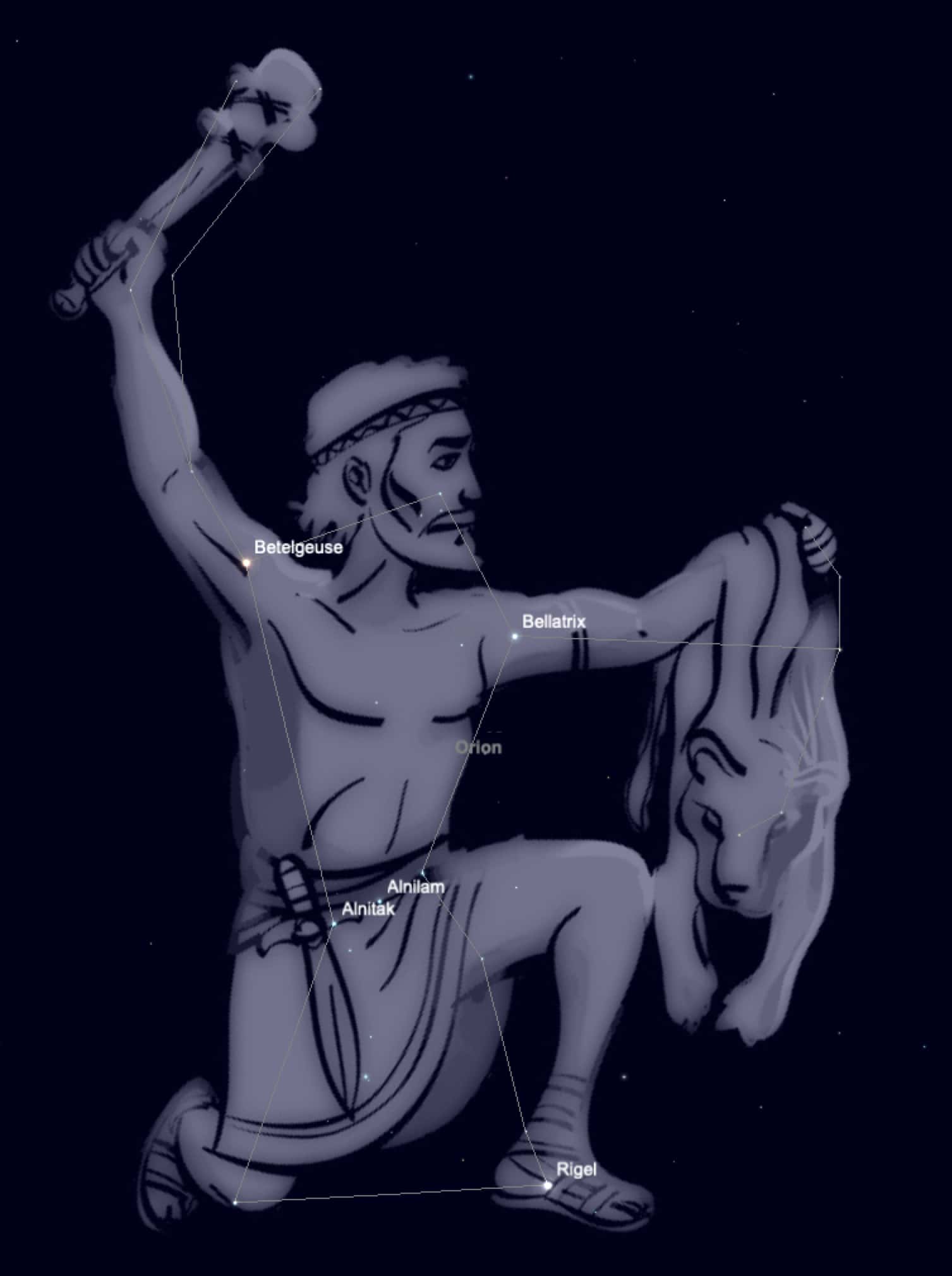 Orion Constellation – The Hunter in the Night Sky