How Far Away is Neptune from the Sun and the Earth?

By Sharmila Kuthunur
|
6 minutes
Home »Astronomy »How Far Away is Neptune from the Sun and the Earth?

Neptune, the blue planet, orbits the Sun further out than Uranus at an average distance of 2.79 billion miles (4.49 billion km), which is 30 times further out than the Earth. At this rate, Neptune takes a whopping 165 Earth years to complete one orbit around the Sun.

At this distance from the Sun, what does a day and a year on Neptune look like? If we were to ever visit this distant planet, how long would it take to get there?

How Far Away is Neptune From the Sun?

At times, Pluto ‘crosses’ Neptune’s orbit and remains inside it for 20 years. At these times, dwarf planet Pluto is closer to the Sun than Neptune, but the planets never collide with each other because they are always at different points in their orbits when this happens.

How Far Away is Neptune From the Earth?

As the Earth and Neptune orbit the Sun, the distance between them keeps changing. At times Neptune is behind the Sun, leading to the alignment of Neptune, the Sun, and Earth, with the Sun in between Earth and Neptune. At this point, known as a solar conjunction, Neptune is as far away as it can be from Earth, at nearly 2.82 billion miles (4.54 billion km).

As the distance keeps changing, Neptune’s closest approach to Earth occurs when both planets are on the same side of the Sun. At this time, known as opposition, Earth is placed in between the Sun and Neptune, reducing the distance between the two planets to nearly 2.7 billion miles (4.3 billion km).

When it is closest to Earth, Neptune shines at magnitude 7.8, which means it is not visible to the naked eye. Even if you use a telescope to see Neptune, its vast distance makes it almost impossible to distinguish it as more than a point-like star.

Distance of Neptune from Sun and Earth in 2021

The following table shows how far away the planet Neptune is from Earth for each month in 2021. The distance is taken at the 15th of each month.

Neptune is closest to Earth in September and farthest in March, which are both bolded.

The following table shows how far away the planet Neptune is from the Sun for each month in 2021, also based on the 15th of each month.

Over the course of 2021, Neptune moves half a million miles closer to our star.

How Long Would It Take to Reach Neptune?

Voyager 2 is the only spacecraft that visited Neptune, and it took 12 years to get there. Light, on the other hand, travels to Neptune from Earth in about 4 hours and 4 minutes when the two planets are at their closest.

So far, in this article, we have learned of the distance from Earth to Neptune at two important points in its orbit — one when the planet is closest and the other when it is the furthest. Let’s now look at the detail of how long it takes to get to Neptune.

There are two ways to go about this. First, we will look at the time light takes to reach Neptune from Earth.

Next, we’ll board an imaginary spaceship and see how long it will take us to travel to Neptune

How Long Does Light Take to Travel from Neptune to Earth?

Light travels the fastest of all known objects because it has no mass. Its speed is 186,282 miles per second. At this rate, light takes 499 seconds to reach Earth from the Sun, a distance known as an Astronomical Unit (AU).

Let’s take a look at the shortest, longest, and the average time for light to travel between Earth and Neptune.

This also means that when you look at Neptune from a telescope, you are looking at it as it looked at least 4 hours ago!

How Long Does it Take a Spaceship to Travel to Neptune?

Only one spacecraft, Voyager 2, has visited Neptune so far. It traveled as close as 3,000 miles (4,950 km) above Neptune’s north poles. Voyager 2 took 12 years to arrive at Neptune.

How Long is a Day on Neptune?

Neptune rotates with a speed of 2.68 km/s. At this speed, Neptune takes just 16 hours to complete a rotation on its axis — that’s how long a day on the planet is.

Calculating the length of a day is done by working out a planet’s rotational speed, usually by measuring the rotational speed of its core. This is harder for ice giants because they have a very small solid core engulfed by icy layers, making it difficult to get accurate measurements.

How Long is a Year on Neptune?

Neptune takes 165 Earth years to orbit the Sun. While a day on Neptune is shorter than that on Earth, its year is much longer. This means that Neptune rotates faster than Earth but orbits the Sun more slowly.

Are There Seasons on Neptune?

Neptune is tilted by 29 degrees. Its axial tilt combined with its lengthy year leads to 40-year-long seasons on the planet.

During summer, Neptune receives more sunlight on the hemisphere facing the Sun, and scientists have observed that its cloud bands get brighter as summer progresses.

Most interesting is that Neptune experiences seasons at all because it receives 900 times less sunlight than Earth does. The planet also hosts some extreme seasonal changes and fierce winds of up to 1500 km/h, the origins of which are unclear.

Neptune is the eighth, and final, planet from the Sun and orbits our star at an average distance of 2.79 billion miles (4.49 billion km). At this large distance, Neptune takes just 16 hours to complete one rotation about its axis, but a lengthy 165 Earth years to finish one orbit around the Sun.

Even at this distance, Neptune experiences all four seasons — summer, winter, fall, and spring, as on Earth, except each season stretches for 40 long years due to Neptune’s orbit.

Voyager 2 is the only spacecraft that has visited Neptune so far, and it took 12 years to get there.

Would you hop on a spacecraft to visit Neptune? 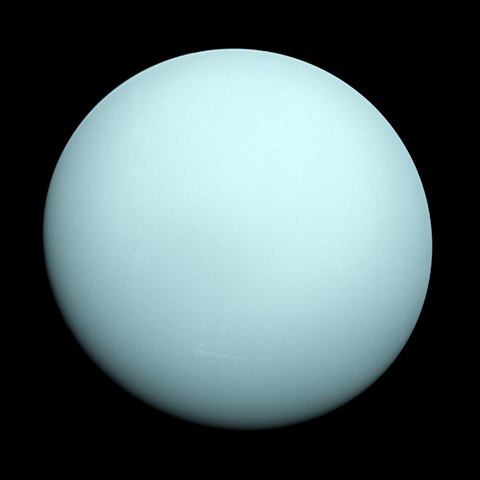 How Far Away is Uranus From the Sun and Earth?