Titan: Saturn’s Largest Moon – Everything You Need to Know

Would you believe me if I told you that you can walk (even fly, if you have wings) on Titan’s surface without a spacesuit?

Titan is the only moon in our solar system that has many similarities to Earth — a dense atmosphere, lakes, river channels, and even volcanoes.

Titan is the largest of Saturn’s many moons and the second largest in our solar system after Ganymede. It is bigger than Mercury, 50% wider than Earth’s moon, and of a similar size to Mars. That’s quite the list of achievements for a moon, isn’t it?

On top of that, there’s a buzz around Titan being potentially habitable? Did we already find life on the moon? No, we didn’t, but there is a lot of evidence-based interest in potential life that we’ll soon learn about.

Finally, Titan is slowly drifting away from Saturn, similar to how the Moon is moving farther from Earth. Let’s learn all about it before it goes too far away!

How Big is Titan?

Titan has a radius of 1,600 miles (2,575 km), making it nearly 50% wider than Earth’s moon. In fact, Titan is also bigger than Mercury! Only Jupiter’s moon Ganymede is bigger than Titan, that too by a narrow margin of just 2%.

Titan resides at an average distance of 759,000 miles (1.2 million km) from Saturn. At this distance, the moon orbits Saturn every 15 days and 22 hours.

Titan is also tidally locked to the gas giant, which means it always shows the same side to Saturn, no matter where it is in its orbit. This is the same scenario as our own Moon, which is why we only see one side of it.

Moreover, Titan’s orbit is alongside Saturn’s equatorial plane, which means that the tilt of both the moon and Saturn are similar. This leads to a similar schedule in seasons that last more than seven Earth years and a year that extends for 29 Earth years.

What is the Structure of Titan?

In images, Titan looks a hazy golden in color. That is the atmosphere we are looking at, which is primarily made of nitrogen. Below the atmosphere, scientists say there exist five main layers of the moon.

Let’s peel them back one layer at a time:

How Was Titan Formed?

Yes. Titan is slowly drifting away from Saturn each year.

This concept is familiar with our Moon as well. As a moon orbits the planet, the moon’s gravity pulls on the planet causing it to bulge outwards when the moon is overhead and then sink back as it passes.

Similar is the case with Saturn, where Titan’s gravity is pulling on Saturn. Over time, the constant bulging and shrinking cycle slows the orbit of the planet down and transfers energy to the moon pushing it into a slower but higher orbit.

From data that Cassini acquired, scientists understood that Titan is drifting away from Saturn at a rate of 4 inches (11 cm) per year — 100 times faster than previously thought.

Does Titan Have an Atmosphere?

Titan is the only moon in our solar system to have such a dense atmosphere — so much so that a human could walk around without a spacesuit.

However, that same human would, of course, need an oxygen mask and heavy jackets to combat the lack of oxygen and the cold, which is a frigid -290°F (-179°C). The gravity on Titan is similar to our moon, which means humans (with artificial wings attached) could not only walk on Titan, they could fly too!

Low gravity also means that Titan cannot hold onto its atmosphere as tightly as Earth does, which is why Titan’s atmosphere extends upwards for 370 miles (600 km) — 10 times higher than Earth.

Titan’s atmosphere is mostly nitrogen, with significant amounts of methane and trace amounts of hydrogen and other hydrocarbons.

The methane is constantly broken down by sunlight, but the fact that it is being replenished indicates that there might be some processes at work creating more of it because otherwise it would be erased with time.

The surface pressure on the surface of Titan is 60% greater than that on Earth. The atmosphere is 1.19 times more massive than Earth’s atmosphere and the orange color of the moon is due to tholins — complex compounds formed when UV light reacts with atmospheric elements.

The rest of the atmosphere is opaque and blocks most of the visible light from the Sun, which is why the surface is obscure.

The structure of Titan’s atmosphere is similar to Earth’s. From the ground up, the layers are:

Troposphere: Most of Titan’s weather occurs in this region. Methane condenses and rains on Titan with a speed of 3.5 miles per hour, almost 6 times slower than rain on Earth (the speed of rain on Earth is 20 mph). Multiple layers of cloud are present here as well.

Stratosphere: This region consists mainly of nitrogen, methane, and a tholin layer that results in a sharp temperature change because of infrared opacity.

Mesosphere: This is a hazy layer found at 450-500 km, where the temperature is similar to the thermosphere, and the cooling of hydrogen cyanide lines occurs.

Thermosphere: This layer is found at 200 km from the surface, where the production of heavy ions takes place.

Titan has an Earth-like surface, complete with lakes, volcanoes, and sand dunes.

It is much colder on Titan’s surface than here on Earth and the chemistry is different, but Titan is still the only world in our solar system that is similar to Earth in multiple aspects.

Titan’s surface has rock-like structures, but they are made of water ice.

Even volcanoes erupt water instead of the lava that we see on Earth. Titan has lakes and river channels too, but they are filled with flowing methane and ethane instead of water.

Similar to dunes on Earth, Titan has ‘dark dunes’, especially near its equatorial regions. The dunes are made of dark hydrocarbon grains, akin to coffee grounds.

Titan has a few impact craters, but there might be tectonic plates, winds, and flowing liquids similar to those on Earth that erase evidence of such impacts.

Can You See the Sun on the Surface of Titan?

Light from the Sun takes 80 minutes to reach Titan and the moon’s atmosphere is so dense and extends so high up, that it is extremely effective at scattering light, especially at twilight.

If you were to stand on Titan’s surface, you’ll notice that twilight is brighter than daylight due to the intense light scattering. For the rest of the day, sunlight is faint but uniform, and about 100-1000 times dimmer than an afternoon on Earth.

It is also because of the dense atmosphere that sunsets are not as dramatic as here on Earth. Instead, it would feel like you are in a Martian sandstorm.

Is There Life on Titan?

Titan, like Jupiter’s moon Europa, is believed by many scientists to be one of the most viable locations for extra-terrestrial life in the solar system.

No life has been detected so far on Titan, but the moon is potentially habitable, both for life as we know it (below the surface) and life as we don’t (on the surface).

The Cassini spacecraft detected an underground ocean, made up of liquid water that is most likely mixed with salt and ammonia. Now, salty oceans are present on Earth too, which is why life there is thought to be a strong possibility.

The Huygens probe which landed on Titan estimated that the subsurface ocean may exist 35 miles to 50 miles (55 to 80 km) below the ocean.

There is evidence that Titan has rivers, lakes, and seas all made of methane and ethane (in liquid form). This hints that there might be life possible on the surface as well, just not the same kind as on Earth.

Because of these signs of a potentially habitable environment, future missions are planned by space agencies to visit Saturn’s largest moon.

The Titan Saturn System Mission is a joint venture between ESA and NASA. This mission consists of an orbiter and two probes that will explore Titan’s surface. The mission was originally set to launch in 2020 but has been back-burnered for now.

NASA’s Dragonfly spacecraft is planned to launch in 2026 and arrive in 2034 and will look for chemical processes similar to both Titan and Earth. A second NASA mission, called the James Webb Telescope will observe Titan from a distance and dissect its atmosphere using spectroscopy to scan for Earth-like molecules.

Can I See Titan With a Telescope?

Yes, you absolutely can see Titan with a telescope.

Titan has a visual magnitude of 8, which means it is too faint to be seen with a naked eye. But it is also Saturn’s largest moon, which is why a small telescope or a powerful pair of binoculars can result in a brownish dot, which is Titan — the easiest to spot among all Saturn’s moons.

For that, you’ll have to know when Saturn is visible and how you can spot it. Titan orbits well outside Saturn’s rings and any night sky software, such as the free Stellarium or SkySafari 6 will show you exactly where to find Titan at any given time.

Titan, the second-largest moon in the solar system after Ganymede, orbits Saturn once every 16 days.

The moon was formed from leftover materials after the Sun’s formation. Its elements are also similar to those present in the Oort Cloud, in the far reaches of the solar system.

Titan is seen as a hazy golden color and has a dense atmosphere, which is why the surface is obscured when seen from space.  When the Huygens probe landed on the moon, it sent back images of its surface and scientists understood that daylight is 100-1000 times dimmer than an afternoon on Earth.

Titan is unique in being the only moon where there are lakes and river channels filled with liquid methane and ethane. More interestingly, there is an underground ocean, possibly salty and including ammonia, that might make life as we know possible.

It’s a few years before any planned spacecraft will visit Titan again to look for further signs of possible life. Until then, we’ll satisfy our curiosities by viewing it with our telescopes or binoculars. 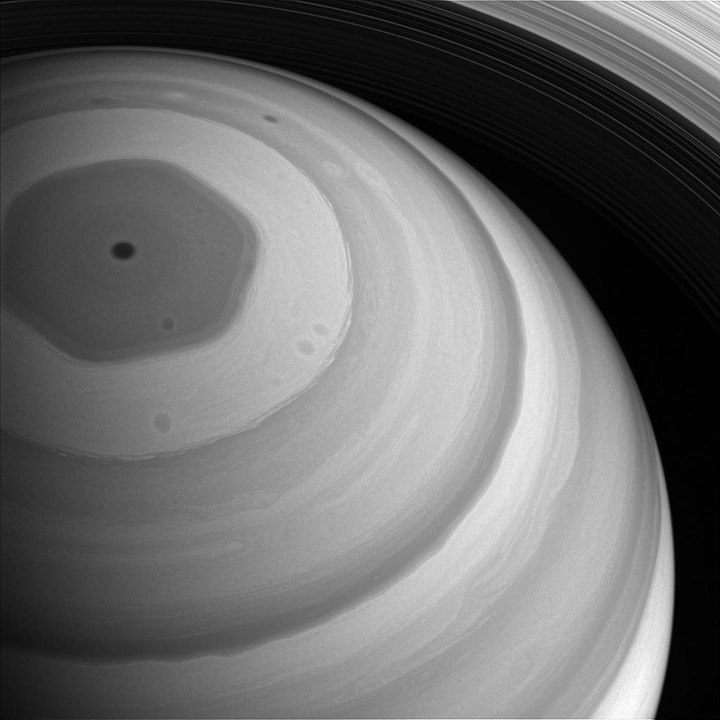 What is the Hexagon of Saturn?