In this article, we’ll be sharing with you everything you need to know about the constellation of Ursa Minor, including how to find it, deep space objects contained within it, and how to use it to find other night sky objects more easily.

The Constellation of Ursa Minor

Ursa Minor is Latin for ‘the lesser bear’, as opposed to Ursa Major, which is ‘the great bear’.

The Ancient Babylonians knew this constellation as the ‘Wagon of Heaven’ and the Ancient Greeks originally knew it as Cynosura (Dog’s Tail).

Thales of Miletus (a Phoenician philosopher and astronomer) introduced it to the Greeks, where it was first cataloged by Greek astronomer Ptolemy over 2000 years ago.

You might not recognize the name of this constellation, but you almost certainly know its most famous star: Ursa Minor is the home of Polaris, which is more commonly known as the North Star or Pole Star.

The Pole Star has been an important navigational aid since ships first began sailing the seas because all the northern constellations revolve around it. The pole star is circumpolar for everyone north of the equator and shows the direction of true north at night.

Over millennia, the Pole Star changes due to the wobble in the spin of the Earth’s axis (procession), so it’s more accurate to say that Ursa Minor is the home of the current Pole Star. Other stars that have been the Pole Star are Vega (in Lyra), Thuban (in Draco), and Kochab (in Ursa Minor). Cepheus is the home of future Pole Stars, but none gets closer than Polaris until around the year 3000.

The two most common myths about this constellation are associated with Zeus. In one myth, Zeus’s mother, Rhea, hid young Zeus on an island to protect him from his father, Cronus. A prophecy foretold that one of Cronus’s children would overthrow him so he swallowed five of his children when they were born. Two nymphs took care of young Zeus on the island of Crete: Ida and Adrasteia. Ursa Minor is said to represent Ida and Ursa Major Adrasteia.

In the second myth, Zeus and nymph Callisto had a son named Arcas. When Hera (Zeus’s wife) learned about Arcas she turned Callisto into a bear. Many years later, Callisto and an adult Arcas met in the woods. Arcas was about to kill Callisto when Zeus intervened by placing them both in the heavens. Ursa Major represents Callisto and Ursa Minor represents Arcas, although Arcas is usually associated with Boötes The Herdsman.

To help you spot Ursa Minor, here’s what SkySafari 6 shows. Click the image for a full screen version and you’ll see the letters ‘NCP’, shown at the tail’s end. This stands for North Celestial Pole. Note how close Polaris is to the NCP, which is why Polaris is the Pole Star.

Ursa Minor has an area of 256 square degrees making it the 56th largest of the 88 recognized constellations. Ursa Minor’s asterism (the shape we recognize in the stars) is known as the ‘Little Dipper’ and is shaped like a ladle, as shown below.

As with all the constellations, Ursa Minor covers a larger area of sky than just its asterism. The whole area of the sky occupied by Ursa Minor is shown in the image below.

In the next section discover how to find Ursa Minor.

How To Find Ursa Minor In The Night Sky

Ursa Minor is part of the Ursa Major family of constellations, which includes Boötes, Draco, and Ursa Major. It is visible to observers at latitudes between +90° and -10°. It’s circumpolar for observers in the Northern Hemisphere meaning that it can be seen all year and at any hour of the night.

Conversely, most observers in the Southern Hemisphere can’t see it. The constellation of Ursa Minor is bordered by just three constellations: Camelopardalis, Cepheus, and Draco.

To find Ursa Minor, carry out a naked-eye search for its ‘Little Dipper’ asterism. You’ll always find it relatively high over the northern horizon – the further north you live, the higher it will be.

Alternatively, carry out a naked-eye search for the Big Dipper. Draw an imaginary line from Merak to Dubhe (~5°). Extend this line another 28° to Polaris, the brightest star in the Little Dipper – click on the image below for a visual guide. You can use your hand at arm’s length to estimate these distances.

As you can see in the image above, the Big and Little Dippers are always positioned with their handles extending in opposite directions and their dippers facing one up and the other down.

To find Ursa Minor’s exact position for your location on any night, use software such as Stellarium [https://stellarium.org/] (free) or Sky Safari.

Ursa Minor has relatively few noteworthy stars, in the image below you can see the names of the brightest. Below that, we cover off more detail for each.

It’s located at the end of the Little Dipper’s handle. The primary is yellow, the secondary, 9.10 magnitude component, is pale white. The two are 18.4 arcseconds apart and easy to spy in a backyard scope.

Polaris is 430 light-years away.

Beta Ursae Minoris (Kochab) – This double star system is the second brightest star in Ursa Minor and is one of the bowl stars in the Little Dipper.

The 2.1 magnitude, orange giant and its 12.8 magnitude secondary component are 214.1 arcseconds apart and make a challenging split in a smaller telescope.

Kochab is 126 light-years away and its traditional name originates from the Arabic phrase for ‘the star’. Kochab and Pherkad form a small asterism called the ‘Guardians of the Pole’ as they were the twin pole stars from 1500 BC to 500 AD.

Gamma Ursae Minoris (Pherkad) – This white giant star has a magnitude of 3.0 and is the third brightest star in Ursa Minor.

Pherkad is one of the bowl stars in the Little Dipper and is 480 light-years away.

Its traditional name is derived from the Arabic phrase for ‘the two calves’ in reference to Pherkad and Kochab being the ‘Guardians of the pole’.

Delta Ursae Minoris (Yildun, Gildun, Vildiur) – This double star has a magnitude of 4.4 and is the sixth brightest star in Ursa Minor. It’s one of the handle stars in the Little Dipper.

The white, main-sequence primary and its secondary component are 4.5 arcseconds apart but not resolvable in a backyard scope.

Delta Ursae Minoris is 891 light-years away and its traditional names are taken from the Turkish word for ‘star’.

Epsilon Ursae Minoris (Urodelus) – This triple star system is the fourth brightest star in Ursa Minor. It’s one of the handle stars in the Little Dipper.

The 4.2 magnitude, yellow-orange giant and its 12.3 magnitude, dwarf secondary component are 76.6 arcseconds apart. The primary is an eclipsing spectroscopic binary with a period of 39.5 days resulting in a brightness variation from 4.19 to 4.23.

Epsilon Ursae Minoris is 345 light-years away and its name Urodelus is Greek for the ‘Conspicuous Tail’ of the Little Bear.

Zeta Ursae Minoris is 375 light-years away. Alifa al Farkadain is Arabic for ‘the dim one of the two calves’. This is a mistranslation (or misnaming) because in ancient Arabia the front stars of the Little Dipper’s bowl were known as calves.

Eta Ursae Minoris (Anwar al Farkadain) – This double star is the seventh brightest star in Ursa Minor. The 5.0 magnitude, yellow-white, main sequence primary has a 15.3 magnitude secondary star beyond the reach of a backyard scope.

Eta Ursae Minoris is one of the bowl stars in the Little Dipper and is the dimmest of the asterism’s stars.

Eta Ursae Minoris is 97 light-years away and Anwar al Farkadain is Arabic for ‘bright one of the two calves’; this name was originally applied to Kochab.

Theta Ursae Minoris – This red giant star has a magnitude of 4.98 and is 856 light-years away.

The special position of Polaris in the night sky makes it a handy jumping-off point for finding other night sky sights.

NGC 6543 (Cat’s Eye Nebula) – Find Polaris. Draw an imaginary line approximately 20° from Polaris to Delta Draconis and Chi Draconis which are towards the bowl of the Little Dipper and are 6° apart.

Imagine Delta Draconis and Chi Draconis are the base of an equilateral triangle pointing toward Draco’s head; NGC 6543 is at the top corner of this triangle.

NGC 6503 (Spiral Galaxy) – Follow the steps above to locate Delta and Chi Draconis.

Objects To See Within Ursa Minor

Ursa Minor doesn’t contain any Messier objects and few of its other deep sky objects are suitable targets for small telescopes. However, you might try the following:

Ursa Minor is a faint, easy to find constellation with a well known asterism; the Little Dipper.

Some of the brightest stars in this circumpolar constellation are double stars and worthy targets for small telescopes. Hop on over from the Big Dipper to Polaris to enjoy the wonders of this constellation. 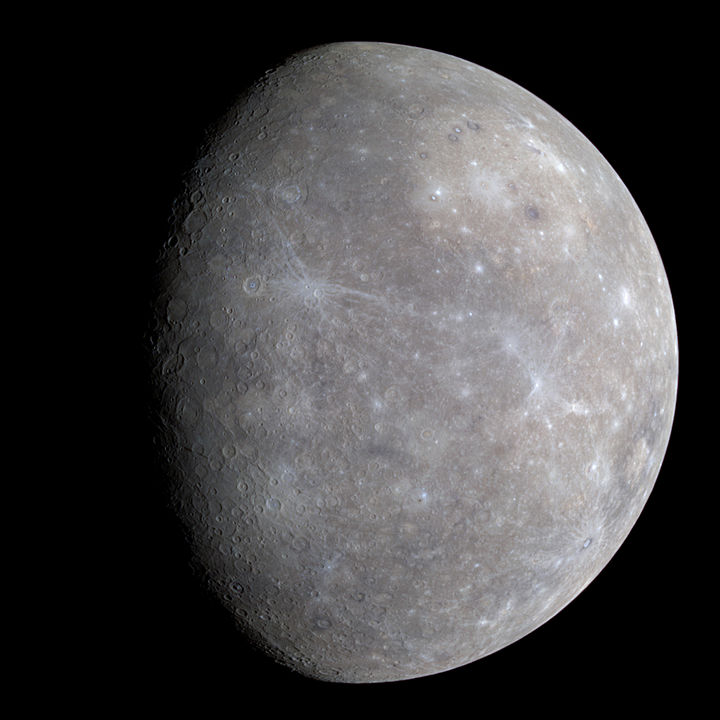 What is Planet Mercury Made of, and How Big is it?