Camelopardalis Constellation – A Guide to the Midnight Giraffe!

In this article, we’ll be sharing with you everything you need to know about the constellation of Camelopardalis, including how to find it, deep space objects contained within it, and how to use it to find other night sky objects more easily.

The Constellation of Camelopardalis

This constellation was invented by Dutch cartographer Petrus Plancius (1552-1622) and first documented by German astronomer Jakob Bartsch in 1624.

The word Camelopardalis is derived from the Latinized version of the Greek word for giraffe. It may seem unusual today but, in Greek, the giraffe was called the ‘camel-leopard’ due to its long, camel-like neck and its leopard-like spotted coat.

The ancient Greeks didn’t see any stars in this region of the sky so there are no myths associated with this modern constellation.

To help you spot Camelopardalis, here’s what SkySafari 6 shows.

Camelopardalis has an area of 757 square degrees making it the 18th largest of the 88 recognized constellations. If you’ve observed the annual Perseid meteor shower, which peaks in mid-August, you may recognize this faint, constellation as being near the radiant.

In the next section discover how to find Camelopardalis.

How To Find Camelopardalis In The Night Sky

To find Camelopardalis, do a naked-eye search for Polaris (in Ursa Minor) and Capella (in Auriga) then draw an imaginary line between these two stars (~43°) and look for Alpha Camelopardalis near the midpoint of the line.

Alternatively, do a naked-eye search for Cassiopeia’s “W” asterism then draw an imaginary line from Shedar to Segin (~13°) and, extend this line ~18° to Alpha Camelopardalis.

You can measure these distances with your hand held at arm’s length.

To find Camelopardalis’s exact position for your location on any night, use software such as Stellarium (free) or SkySafari 6.

The Brightest Stars in Camelopardalis Constellation

See all of the stars which are brighter than magnitude 5.0 on the SkySafari image below, with their details listed below that.

It’s so far away that its distance measurement is also unknown but there are reasons to believe it’s around 3,200 light-years distant.

BE Camelopardalis – This is an orange-red M2 class star shining at magnitude 4.42. It’s 796 light-years away. It’s a long-period, pulsating variable ranging in magnitude from 4.35 to 4.48.

CE Camelopardalis – This magnitude 4.59 yellow-white supergiant marks the giraffe’s rear foot. CE is a pulsating variable star ranging in magnitude from 4.64 to 4.69 over 16.8 days and is 2,509 light-years away.

CS Camelopardalis (HR1035) – This variable double star is the second brightest star in Camelopardalis but only shines at magnitude 4.26. The yellow-white supergiant primary and its 7.80 magnitude, secondary components are 2.3 arcseconds apart. CS Camelopardalis is 1,941 light-years away.

VZ Camelopardalis – This star lies away from the asterism, 7° from Polaris, and near the boundary with Cepheus. It shines at magnitude 4.88 and is an orange-red giant 499 light-years from Earth.

HR2209 – This double star is 175 light-years away and marks the giraffe’s snout. The 4.76 magnitude, white main-sequence primary and secondary components are 8.5 arcseconds apart.

Objects To See Within Camelopardalis

Camelopardalis doesn’t contain any Messier objects but does contain some other deep sky objects suitable for small telescopes.

See the image below showing the line running from 1 o’clock to 7 o’clock inside the circle.

Camelopardalis is a medium-sized, dim, circumpolar constellation with many notable stars and some deep sky objects. Look for it between Cassiopeia and Ursa Major this winter. 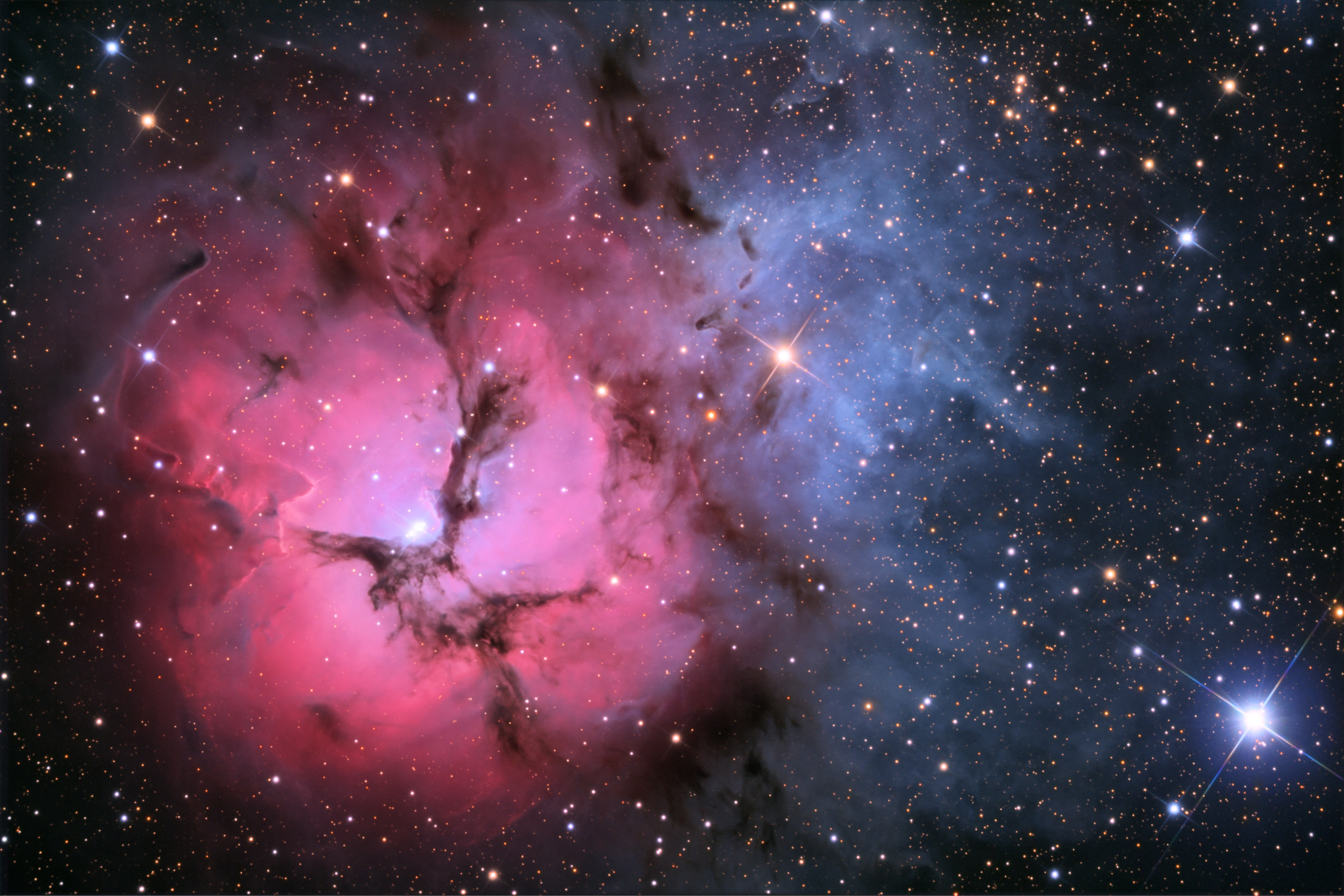 How to Find and Observe the Trifid Nebula (M20)