How to Find and Observe M6 – The Butterfly Cluster

By Dr. Alan Strauss
|
7 minutes
Home »Astronomy »How to Find and Observe M6 – The Butterfly Cluster

Great for binoculars or small telescopes, and visible to the naked eye in dark skies, M6 is one of the largest and brightest open clusters in the night sky.

Often referred to as the Butterfly Cluster due to its appearance at the eyepiece, this treasure trove of stars, like a swarm of fireflies, is sure to inspire delight on many a warm summer evening.

As you read through this article, you will learn how to locate and observe the Butterfly Cluster with the naked eye, and through binoculars or a telescope. You will also discover the nearby cluster Messier 7 and possibly other faint objects in this dense region of the Milky Way.

M6 is an Open Cluster of relatively young stars born from the same molecular cloud and orbiting in the plane of our galaxy.

Despite being 1,600 light-years away, the Butterfly Cluster is actually a galactic neighbor of ours since our own Milky Way galaxy is in the order of 100,000 light-years in diameter.

Due to its proximity, large apparent size, and naked eye visibility, it is believed that the first recorded mention of this cluster was in Ptolemy’s Almagest in the 2nd century AD. When describing the nearby cluster M7 (often referred to as Ptolemy’s cluster) he noted ‘Girus ille nebulosis’ meaning ‘2 small clouds’.

Despite Ptolemy’s description and 1654 observations by Giovanni Batista Hodierna (unpublished at the time), this cluster was independently discovered in 1746 by P. L. de Cheseaux who remains credited with its discovery to this day.

Later, in May 1764, Messier wrote “A cluster of small stars between the bow of Sagittarius & the tail of Scorpius. To the naked eye, this cluster seems to form a nebula without stars; but even with the smallest instrument one employs for investigating one sees a cluster of small [faint] stars.”

Robert Burnham provided the ‘Butterfly’ moniker when, in his Celestial Handbook, he described it as “a completely charming group whose arrangement suggests the outline of a butterfly with open wings.” As you will see for yourself, this butterfly shape is readily apparent in a pair of binoculars and is indeed quite charming.

When is M6 Visible?

This table shows when you can best see M6 from the mid-latitudes of the northern hemisphere. Times given are approximate local times for mid-month using a 24hr clock, underlined times are during hours of darkness.

At magnitude 4.2, the glow of M6 should be visible naked eye under Bortle 5 skies with relative ease.

Technically, the naked-eye limiting stellar magnitude of a Bortle 6 sky is approximately 5.5, and depending on your local horizon and seeing conditions you may be able to spot M6’s glow with averted vision.

With any size binoculars or telescope, M6 should be detectable even under Bortle 8 city skies. (In fact, there’s loads of astronomy you can do in bright cities, the link opens our guide in a new tab.)

As this cluster is located in the southern region of Scorpius, it never rises higher than 25 degrees from my location in southern Arizona. As a result, I try to observe this cluster from a location with a darker southern horizon, near the time of its transit.

How to Find The Butterfly Cluster, M6

Happily, finding M6 is fairly straightforward, signposted as it is by the Teapot asterism of Sagittarius. (It’s not very far away from M8, the Lagoon Nebula, which you could view on the same night). Use the charts below from SkySafari 6 to find your way there.

First, face south and identify the constellation of Scorpius and the ‘teapot’ asterism of Sagittarius. The image below is for 11pm in the middle of July for mid-US states. Stars are shown to magnitude 5.0.

If you can faintly see the Milky way, you will notice a glowing patch between the stinger of the Scorpion and the spout of the Teapot.

This glowing patch is M7, Ptolemy’s cluster, and is a beautiful waypoint on your journey to M6. If you are under darker skies you may also note the subtle glow of M6 just to the northwest of M7. These two clusters are only 3.5 degrees apart.

Examining the chart below, where stars to magnitude 7.0 have been included, you can see the Shaula, M6, M7 triangle in more detail.

At magnitude 1.6, Shaula, the stinger star of the scorpion, is what I use to locate these clusters when I am unable to see the glow of the milky way. Point your binoculars at Shaula and then move 4.5 degrees east towards Kaus Media, the bright star between the Teapot’s lid and spout. M7 will be the obvious open cluster.

M6 lies 3 degrees north and slightly west of M7. In binoculars, the butterfly shape is unmistakable.

If you want to go directly from Shaula, M6 is 5 degrees north and slightly northeast. You can also use your fingers to measure this distance in the sky, as M6 will be approximately three finger-widths northeast of Shaula with your hand held at arm’s length.

What M6 Looks Like in Binoculars or a Telescope

Let’s take a look at what you should expect to see when you point your astro binoculars or telescope in the Butterfly’s direction.

To me, M6 is best seen in binoculars or a small telescope at low power, as it is such a large object.

At nearly the apparent size of the full moon, the butterfly shape is readily appreciated. Both my 7 x 50 and 10 x 42 binoculars reveal two to three dozen stars fluttering about.

Astronomers have estimated the butterfly shape to be approximately 9 light-years in diameter, and that the entire cluster is in the order of 20 light-years across

As you take in the majesty of M6, you will note that there is a bright orange star in the cluster. This star, BM Scorpii, is quite striking against the pale color of the other stars.

These stars are relatively young, at approximately 100 million years old. Keep this in mind as you observe M6 through a telescope.

Observing M6 through a small telescope is certainly worthwhile, once the shape of the butterfly has been appreciated through binoculars.

Using my 76mm refractor, I try to maintain very low power, in the range of 20x to 30x. From a suburban sky, the number of stars visible in M6 through a small telescope is in the range of 60 to 80, most brighter than magnitude 11.

How many do you see?

I personally do not recommend using a large telescope (or high magnification in a small one) to observe M6.

While you can resolve more of the cluster’s 100-plus stars, and some of them are quite faint at magnitude 13-14, the cluster loses its identity.

Through my 12.5” Dobsonian, observing M6 is similar to exploring a dense region of the Milky Way. It is fun to sweep through, yet it becomes a challenge to see the boundaries of this cluster, and I quickly move back to my small telescope.

Now that you have seen M6 through a telescope, consider again that this cluster with over 100 member stars is on the order of 20 light-years in diameter.

While this is plenty of ‘space’ for this group of youthful stellar siblings to mature, the stars are still relatively close together. As you may know, the nearest star to our Sun, Proxima Centauri, is a little over 4 light-years away, and this is typical for the average distance between stars within our galaxy.

Over the next several hundred million years, as M6 orbits the Milky Way, the stars will continue to spread out, and eventually, the cluster will no longer be apparent.

As you have seen, M6 is a rewarding object to observe through binoculars or a small telescope.

It is likely that in following this guide you also observed M7, and I hope that in locating these two clusters you have also discovered that this dense region of the Milky Way is filled with interesting areas and objects.

May you spend many enjoyable summer nights like the butterfly, flying through the star fields of our galaxy. 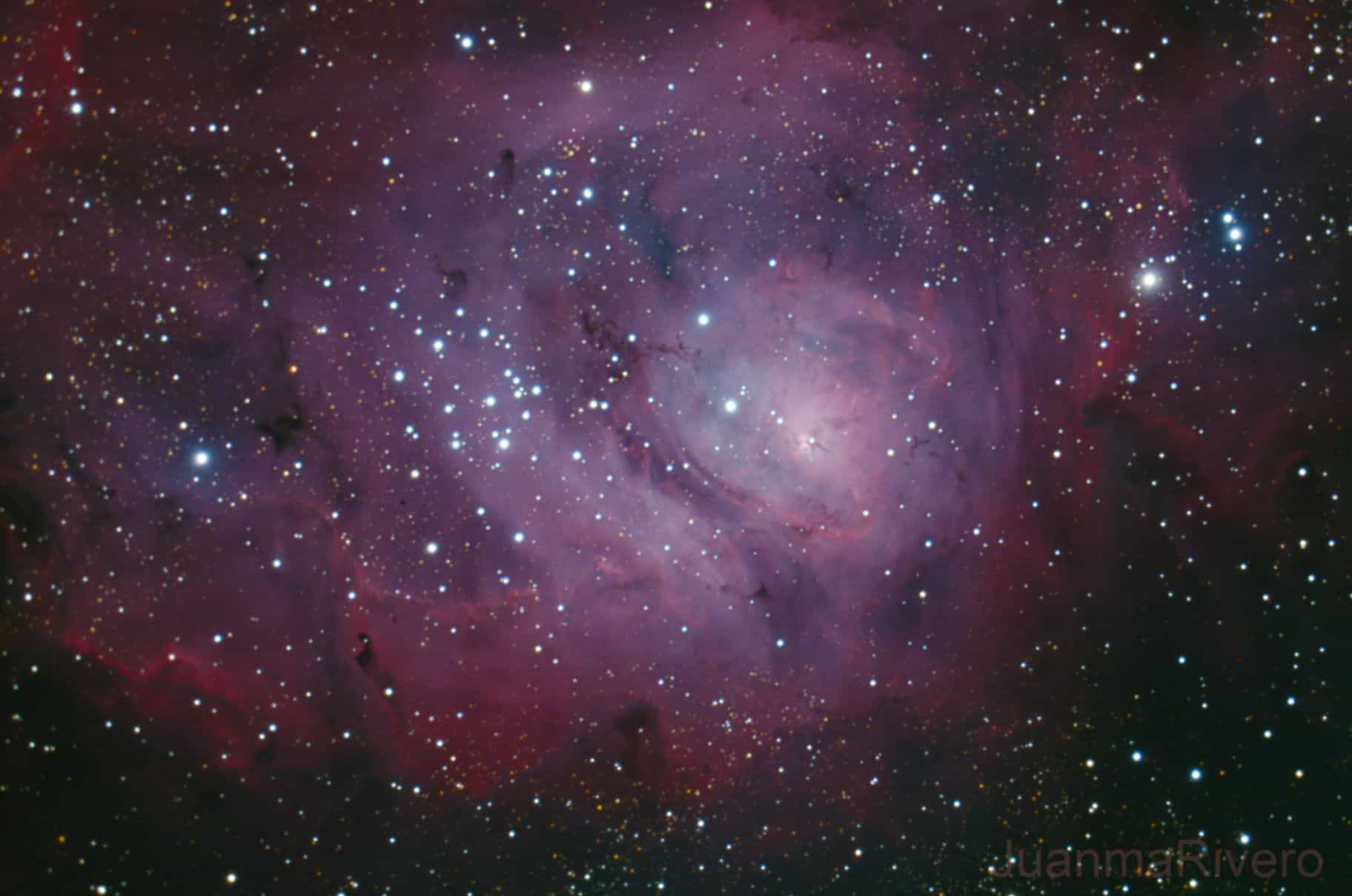 How to Find and Observe The Lagoon Nebula (M8)