How Far Away Are the Stars and How Do We Measure That?

By Sharmila Kuthunur
|
8 minutes
Home »Astronomy »How Far Away Are the Stars and How Do We Measure That?

Every night, an average human eye can see roughly 2,500 stars. We naturally tend to think that the brighter stars are bright because they are closer to us, and the dimmer ones are dim because of their large distance.

While that is often true, it is not always the case.

Consider the farthest and closest stars in the Big Dipper. The second-closest in that constellation at 81 light-years away is Megrez, with a magnitude of +3.3.

Dubhe is the Big Dipper star that’s farthest from us. It is 123 light-years away, 50% farther than Megrez, but it has the same brightness.

We quickly appreciate that size and a star’s intrinsic brightness, or absolute magnitude has a big impact on how bright we perceive it to be from our vantage point on Earth.

The reality of our Big Dipper example is that Dubhe is intrinsically much brighter than Megrez, it’s just further away so it looks about the same to us. This is one reason why we classify stars into different types.

Thus, when it comes to the topic of this article, we discover that brightness cannot be used as a guide to understanding distances.

Let’s take a look at how astronomers measure stellar distances, what limitations those methods have, and a list of stars at various distances for you to look at.

How Far Away Are Stars?

We use miles and kilometers to define distances on Earth. If we were to use the same measurements for cosmic distances, the zeros would overflow our pages!

For example, the Andromeda galaxy is 21,000,000,000,000,000,000 km away, and it is just the nearest galaxy. So many zeros do not usefully convey the staggering distance because, beyond a billion, they are like white noise – they don’t mean anything to us on an emotional level.

Since miles and kilometers are tiny and not useful for cosmic scales, astronomers defined two new measurements to help us out: the parsec and the light-year for this purpose.

Both measurements define distance, although parsec is usually used for objects within our galaxy while light-years define larger distances.

What is a Parsec?

One parsec is the distance at which a star has a parallax angle of 1 degree.

That’s not a useful, everyday description, so let’s decode it a little.

First of all, think of the ‘parallax angle’ part. You can experience a parallax angle for yourself right now. Hold your index finger out at arm’s length with your left eye closed. Line it up with something in the distance, like the edge of a door.

Now, close your right eye and open your left. Your finger has ‘jumped’ to the right and is no longer in line with the distant object you chose.

Coming back to the definition of a parsec, instead of our left and right eyes, astronomers use the opposite sides of Earth’s orbit around the sun to measure the parallax angle.

They look at a star on 01 January and then again on 01 July when our planet is on the opposite side of the sun. What they’ll see is that the star ‘jumped’ against the background, just like your index finger did a moment ago.

A parsec is defined as the distance from Earth where a star appears to jump exactly one degree between measurements taken six months apart.

This equates to one parsec being equal to 3.26 light-years, which is 19 trillion miles or 30 trillion km.

The closest star to Earth (other than the sun) is Proxima Centauri; it is 1.3 parsecs away. Similarly, Betelgeuse is 197 parsecs away.

What is a Light-Year?

In astronomy, a light-year is a measure of distance; specifically, it is the distance that light can travel in one Earth year.

Light travels unbelievably fast compared to cars and planes, but it is still slow when it comes to cosmic scales, which is why it is a handy tool for measuring these unimaginably huge swathes of space.

We routinely use light-years as a measurement on this website because it makes it easier to state how far away very distant objects are. For example:

If we tried writing those distances in miles and kilometers, we’d be writing and you’d be reading for much longer than necessary.

How Do We Measure the Distance of Stars?

There are two main methods for measuring the distance to stars. Those closer to us are measured using the parallax method, while those further away require the use of standard candles.

However, this measurement has to be made 6 months apart and there should at least be an arc second’s difference between the star’s positions.

This method can only be reliably used to measure the distances of stars that are within 200 parsecs (650 light-years) of our planet. This is because the change in viewing angle is too small to be accurately measured for more distant stars.

This might sound quite limiting, but there are at least 1.5 million stars within this sphere.

Discover how many stars are within 10,000 light-years

For larger distances, astronomers make use of standard candles.

A standard candle is any celestial object whose luminosity is known. Since luminosity is tied to distance, astronomers use this property to estimate distances that cannot be done through the parallax method.

Two main types of standard candle are used in astronomy. The first is Cepheid variable stars. Their brightness is more than 40,000 times our Sun’s, helping us see them at very large distances.

They work for this purpose because they are variable stars that pulsate in a very predictable way. Their rate of pulsation is directly related to their luminosity.

If we see a distant Cepheid Variable and measure its variability rate, we know how intrinsically bright it is, i.e. its absolute magnitude. By comparing its known absolute magnitude to its apparent magnitude from here on Earth, we can work out how far away it is.

This method can be used to calculate distances up to 30,000,000 parsecs, or 100 million light-years. Beyond that, we will need a stronger standard candle.

To our rescue comes the Type 1 Supernova. These all have approximately the same light curve when the white dwarf star that causes them explodes.

These are such violent, bright events (often as bright as a whole galaxy when they initially explode) that they act as a standard candle for distances of up to 10,000,000,000 parsecs, or 32 billion light-years.

However, these supernovae are not very common, so scientists have to take advantage of them as they occur. On average, there is only one type 1a supernova per galaxy, per century.

Most stars appear white to our eyes, but when their light is split into their component colors, we see various shades.

Their colors are a reflection of their temperature, which in turn gives insight into their luminosity. Although this is more indirect than other methods, it can be used to calculate the distance, as this technical page shows (opens a new tab).

As we saw above, there are multiple ways to calculate the distances to stars. But every measurement requires us to begin with one measurement: the parallax.

The problem is that this basic measurement has flaws of its own, and when it’s incorporated into other methods, the chances of error increase. This is the side effect of using the ‘cosmic distance ladder’, i.e. where one method relies on another for its accuracy.

Parallax can only be used for small distances (stars very far away don’t appear to move at all, so measuring the parallax is out of the question), which allows us to calculate distances of relatively nearby stars — a small fraction of the 100 to 400 billion stars in our galaxy alone.

Adding to that is the fact that the Earth is moving around the Sun, but the Sun is also moving in the galaxy. The stars themselves are moving in their own galaxies. These dynamics make star measurement complicated.

Examples of Stars to Look For

This short table gives you examples of stars that are bright but distant and near but faint. Can you see all of them and would you be able to guess their distance, or even which was closest, just by looking at them?

Megrez and Dubhe are classic examples that brightness does not automatically tell us the distance to stars.

Instead, we need to measure the change in a star’s distance 6 months apart, which gives us the parallax — a useful method (not without its flaws) that is then used in other methods to calculate stellar distances.

The four stars in our table include a variety of distances, try to see if you can guess the distance by the brightness of the star! 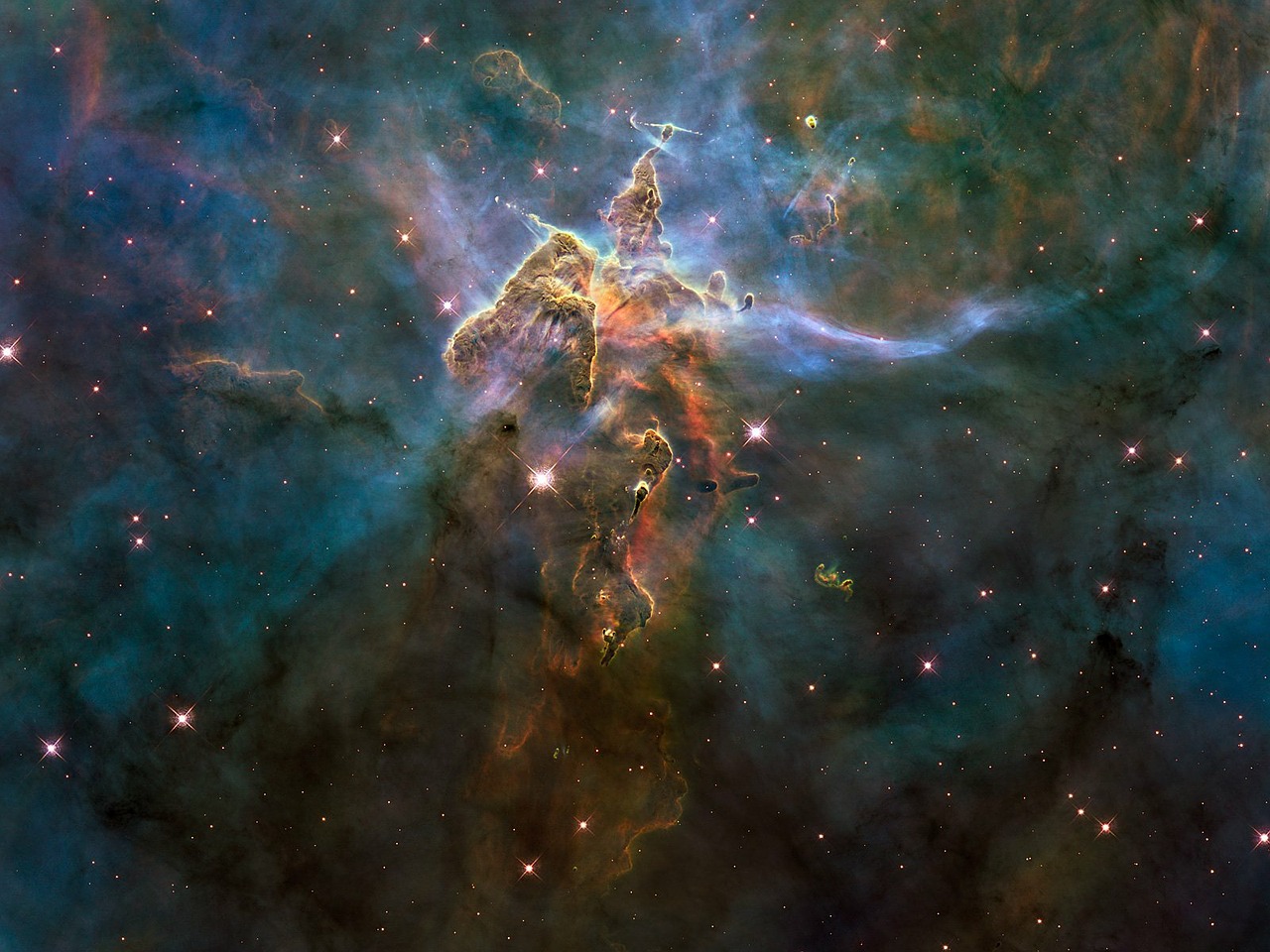 How are Stars Formed? An Easy Guide for Astronomers.