Pisces Constellation – A Guide to the Fishes in the Sky.

By Tanya C. Forde
|
8 minutes
Home »Astronomy »Pisces Constellation – A Guide to the Fishes in the Sky.

In this article, we’ll be sharing with you everything you need to know about the constellation of Pisces, including how to find it, deep space objects contained within it, and how to use it to find other night sky objects more easily.

The Constellation of Pisces

In Greek mythology, Typhon was the offspring of Gaia (Mother Earth) and Tartarus (the region of the underworld where the Titans were imprisoned) and was the largest monster ever created.

Gaia wanted to punish Zeus for imprisoning the Titans (her children) so she sent Typhon to defeat the gods. The goddess Aphrodite and her son Eros jumped into a river to escape.

In one version of the myth, Aphrodite and Eros tied themselves together so they wouldn’t be separated then transformed themselves into a pair of fish. In another version, two fish carried them to safety.

To help you spot Pisces, here’s how SkySafari 6 shows the fish. Note the bright stars Almach, Mirach, and Alpheratz of Andromeda, as well as Hamal in Aries. On the far left of the image, just below the middle of the picture, see the bright cluster of stars forming the Pleiades.

Pisces has an area of 889 square degrees making it the 14th largest of the 88 recognized constellations. This constellation looks like the letter ‘V’ and is known for the asterism ‘The Circlet’ at the end of the western branch of that V.

Pisces is also known for housing the sun during the vernal equinox. This is the spring equinox for the northern hemisphere.

The vernal equinox is the moment when the sun is exactly above the equator, on its way northwards, and day and night are of equal length. It’s also the point where the ecliptic and the celestial equator intersect.

This is known as the ‘first point of Aries’ but, due to Earth procession (wobble), it falls in currently falls in Pisces.

The vernal equinox occurs on ~March 21.

In the next section discover how to find Pisces.

How To Find Pisces In The Night Sky

Pisces is part of the zodiac family of constellations and is visible to observers at latitudes between +90° and -65°.

The six stars in the Circlet asterism are Gamma, Kappa, Lambda, TX, Iota, and Theta Piscium and they represent the head of the Western Fish.

Look east of the Great Square to spot the dimmer triangle of stars representing the head of the Eastern Fish. The stars in the triangle are Tau, g and Sigma Piscium.

To find Pisces’s exact position for your location on any night, use software such as Stellarium (free) or SkySafari 6.

The Brightest Stars in Pisces

Pisces is a large constellation and contains dozens of stars. It is also a dim constellation, with only three stars brighter than magnitude 4.

We’ve listed the most interesting ones brighter than magnitude 5 for you to hunt down. Use the SkySafari 6 star chart, below, to locate them.

Alpha Piscium (Alrischa, Alrescha) – This variable double star is the third brightest star in Pisces and sits at the junction of the east and west branches of its ‘V’ shape.

The 3.81 magnitude, white, main-sequence primary, and its magnitude 5.17 main-sequence secondary component are 1.8 arcseconds apart. This rotating variable ranges in magnitude from 3.82 to 3.83.

Alrischa is 139 light-years away and its name is Arabic for ‘the rope’.

Beta Piscium (Fum al Samakah) – Usually, the beta designation is used for the second-brightest star in a constellation, but not on this occasion. This star may have been badged this way in ancient times because it is near the constellation’s western boundary with Pegasus and Aquarius.

The star itself only shines at magnitude 4.50. It’s a blue-white, main-sequence variable star, which is 495 light-years away from us.

Fum al Samakah is derived from the Arabic for ‘fish’s mouth’.

Gamma Piscium – is part of the Circlet asterism. It is a magnitude 3.70, yellow-orange giant, and the second-brightest star in the constellation of Pisces.

Gamma Piscium is 130 light-years away. This star is moving eastward across the sky at over 0.75 arcseconds per year suggesting that it’s a visitor from outside the Milky Way galaxy.

Delta Piscium – This double star is 311 light-years away. The system consists of a magnitude 4.42 orange giant primary star and a much dimmer magnitude 14 secondary component.

They are 135.0 arcseconds apart, which equates to a huge distance of nearly 13,000 astronomical units (AU).

Epsilon Piscium – A couple of degrees east of Delta, along the western arm of Pisces, we come to this double star.

The system is composed of a magnitude 4.28 yellow-orange giant star and a secondary shining at magnitude 5.20. The two stars are just 0.3 arcseconds apart and 182 light-years away.

Eta Piscium (Kullat Nunu) – Jumping to the eastern arm, we find this erupting variable double star, the brightest star in Pisces. It is 294 light-years away from us.

The two stars are a yellow-orange giant shining at magnitude 3.63 and a main-sequence secondary with a magnitude of 7.51 magnitude. The two components are 0.4 arcseconds apart.

Kullat Nunu is an ancient Babylonian name referring to the cord that connects the Fish of Pisces together.

Theta Piscium – This magnitude 4.28 orange giant star is 149 light-years away and is part of the Circlet asterism.

Iota Piscium – Also part of the Circlet, this double star is 45 light-years away and the fifth-brightest in Pisces. The magnitude 4.13 yellow, main-sequence primary, and magnitude 14.10 secondary components are 123 arcseconds apart.

Kappa Piscium – This variable double star is 153 light-years away and is also part of the Circlet asterism. The 4.92 magnitude white main-sequence primary and its magnitude 9.96 secondary component are 187.2 arcseconds apart.

Lambda Piscium – This 4.50 magnitude yellow-white main-sequence star is 107 light-years away and is also found in the Circlet. Its mass is 1.8 Solar masses, its diameter is 2.1 Solar diameters and it’s 1.4 times hotter than the Sun.

Mu Piscium – This double star is 304 light-years away. The primary star is an orange giant shining at magnitude 4.84. The secondary star has a magnitude of 12.02 and is 209 arcseconds from its companion.

Nu Piscium – Mu’s neighbor on the western branch is this magnitude 4.44 orange giant. It’s 363 light-years away, has 1.2 Solar masses, and a diameter 33 times that of our home star. It is also 26% cooler than the Sun.

Xi Piscium – Further towards the apex of Pisces is this magnitude 4.61 yellow-orange giant. It is 179 light-years away and an eruptive variable ranging in magnitude from 4.60 to 4.63.

Omicron Piscium – Travelling up the eastern arm of Pisces, we find this double star shining at magnitude 4.26. The system is 279 light-years away and comprised of a yellow-orange giant primary and its magnitude 8.3 secondary. They are too close together to be visually separated.

Sigma Piscium – This magnitude 5.50 blue-white main-sequence star is 430 light-years away and forms the tip of the Eastern Fish’s head. Its mass is 3.3 Solar masses, its diameter is 3.6 Solar diameters, and it’s 1.8 times hotter than the Sun.

Tau Piscium – Southeast of Sigma, Tau Piscium shines at magnitude 4.51. It is an orange giant star 169 light-years away. Its mass is 10% more than the sun’s, while its diameter is more than 11 times larger. Its temperature is 19% cooler than the Sun.

Upsilon Piscium – One more step southeast brings us to this magnitude 4.75 white main-sequence star, 308 light-years away from Earth. Its mass is 2.3 Solar masses, its diameter is 4.5 Solar diameters and it’s 1.5 times hotter than the Sun.

Phi Piscium – This double star is 450 light-years away. The 4.67 magnitude orange giant primary and magnitude 9.10 secondary components are 7.6 arcseconds apart.

Omega Piscium – We jump back over to the western fish, near its head, to see this double star.

The fourth-brightest in the constellation, the star system is 104 light-years away from Earth and comprised of a magnitude 4.03 yellow-white supergiant primary component and a magnitude 6.23 secondary component. The two stars are 1.0 arcseconds apart.

g Piscium – This 5.15 magnitude yellow-white main-sequence star is 480 light-years away and is part of the Eastern Fish’s head. Its mass is 1.6 Solar masses, its diameter is 8.0 Solar diameters and it’s 1.3 times hotter than the Sun.

TX Piscium (19 Piscium) – We finish with this red star shining at magnitude 5.01 and forming part of the Circlet asterism. This variable star is 899 light-years away and is a pulsating, long-period variable ranging in magnitude from 4.79 to 5.20.

Objects To See Within Pisces

Pisces contains one Messier object and one other deep sky object suitable for backyard telescope users.

In practical astronomy terms, you’ll locate it less than 1.5 degrees east of the star Kullat Nunu.

Hunt for it by looking a little over 2° west of the star Mu Piscium.

Pisces is a large, V-shaped constellation with many notable stars and a couple of deep sky objects for small telescope users.

It rides high overhead in the winter night sky and is easy to find using the Great Square of Pegasus as a guide.

See if you can discover the Circlet asterism for yourself this year. 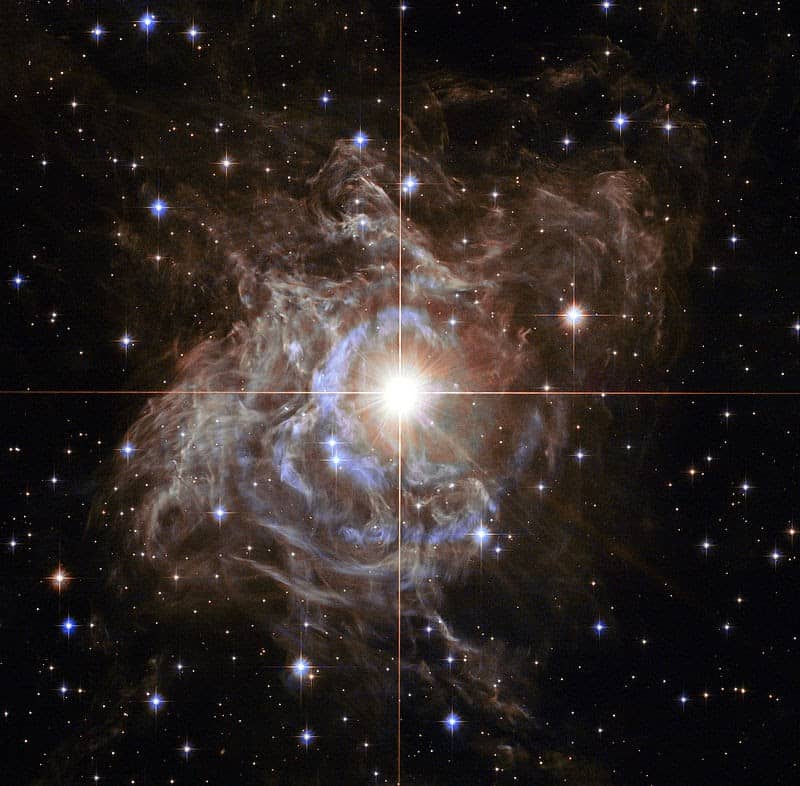 What are Variable Stars and Where Can We See Them?