By Sharmila Kuthunur
|
10 minutes
Home »Astronomy »What are the Smallest Stars?

Our Sun’s diameter is 865,370 miles (1.3 million km). While that may seem huge, our Sun is actually an average-sized star when compared to billions of other suns in the universe.

Stars nearing the end of their lives can be up to 1500 times larger than our Sun. However, once they’ve collapsed under the weight of their gravity, some of them become neutron stars and shrink to as small as 6 miles (10 km) in diameter.

Is there a limit to how small stars can get? We know that Jupiter is too small to be a star, but what are the smallest stars that we know of?

How Do We Measure the Size of Stars?

Quick Answer: The specific method depends on the star’s size and distance. All methods begin with the star’s temperature and luminosity.

The Hertzsprung-Russell diagram plots the relationship between a star’s surface temperature and its luminosity.

The HR diagram is an excellent source to understand stellar evolution. Stars, depending on where they are in their life cycle, are placed in different places on the diagram.

The diagram plots surface temperature on the x-axis against luminosity on the y-axis. Luminosity is measured in comparison to the Sun, which is given a value of 1.

Generally, more luminous stars are hotter, which is shown by the diagonal line running from top left to bottom right. This line is known as the ‘main sequence’ for the life of a star, and the color of stars is dictated by their surface temperature.

There are some exceptions we see to the general rule though. In the top right-hand corner, for example, we see the supergiants. These are cooler stars but very luminous… because they are huge. Take a look at some of the biggest stars we can see.

The bottom right of the main sequence line also has small stars. These are red dwarfs, small and low-temperature suns.

At the bottom left of the diagram, we see another exceptional group of stars, the white dwarfs. These are extremely hot, which we can tell from their color, but much less luminous than the Sun, so they must be small.

How Small Can Stars Get?

Any celestial body that is massive enough to trigger nuclear reactions in its core can become a star.

A useful example, to begin with, is Jupiter, which has the required chemical composition to become a star but lacks the mass to ignite thermonuclear reactions in its core (it would need 80 times its current mass to become a star).

Small stars are difficult to spot and observe precisely because of their small size, even though they are believed to make up to 75% of our galaxy’s stars.

The other issue with finding and measuring small stars is related to telescope sensitivity. It was only in 2001, for example, that astronomers accurately measured Proxima Centauri — a red dwarf 150 times Jupiter’s mass but just 1.5 times its size.

Proxima Centauri sits at the very bottom of the main sequence diagonal and has a mass that’s just 15% of our Sun’s. If it was half as small again, fusion wouldn’t have started in its core and it would have been a brown dwarf. That’s why it is such an achievement that this was the first small star to be measured.

There are a few different kinds of stars which are classed as ‘small’, let’s take a look at them.

Neutron stars are corpses of giant stars whose mass was between 9 to 20 solar masses. This neutron star is a remnant, essentially the collapsed core of the former giant star. When a star runs out of hydrogen to fuse, the core collapses so dramatically that it crushes all electrons and protons together to form neutrons.

In fact, they are so densely packed that just a sugar cube amount of neutron star would weigh 100 million tons on Earth!

Recent research suggests that neutron stars are typically 13 to 15 miles (21 to 24 km) in diameter and 1.5 times more massive than the Sun.

The largest neutron star discovered (possibly) is 2.6 times the mass of the Sun. In truth, scientists are not sure if it’s a neutron star because it’s bigger than any yet seen. However, it could be a black hole because but it is also smaller than the tiniest known black hole, they just don’t know.

Sometimes, a neutron star has its rotational axis and magnetic field axis misaligned. Such instances give birth to pulsars.

Pulsars emit radiation in pulses that we record when the pulse is in our line of sight. It is similar to watching a lighthouse — it always emits light but is only seen to the observer when it is in their line of sight.

These are no lighthouses though. The pulses we detect happen as frequently as 1000 times per second, meaning that the surface of the star is rotating at nearly one-quarter the speed of light!

97% of the stars in the Milky Way, like our Sun, are not massive enough to explode into supernovae and contract into neutron stars.

These stars instead shed most of their outer layers and cool over the next 1 or 2 billion years and form what’s called a white dwarf.

White dwarfs are prevented from collapsing further by quantum mechanics, and a rule known as Pauli’s Exclusion Principle. This states that no two electrons can have the same spin at the same energy level.

In a white dwarf, however, all energy levels are packed with electrons because the density is greater. This trait is called “degenerate” and a degenerate gas cannot be condensed any more by gravity.

White dwarfs are hot because of the thermal energy they emit, there is no fusion reaction taking place inside these stars.

As the mass of a white dwarf increases, its size decreases.

This happens because a greater mass means more electrons need to be crowded together, decreasing its size. There is a limit to how big a white dwarf can be. This is called the Chandrasekhar Limit, which is 1.4 solar masses.

White dwarfs are rare. Astronomers estimate there are just nine of them in 100 star systems closest to our Sun.

The nearest to us is Sirius B, the binary companion to Sirius, 8.6 light-years away.

Another interesting example is the white dwarf ZTF J1901+1458. Its radius is just 1124 miles (1810 km), which is only slightly larger than our Moon. This star also has the shortest rotation period among all white dwarfs – 6.94 minutes – and emits the highest magnetic field.

Astronomers estimate that this is the closest discovery of a white dwarf reaching the Chandrasekhar Limit.

Three-quarters of stars in the Milky Way may be red dwarfs.

Despite their abundance, they are not visible to the naked eye because they are small and dim. Their masses range from 0.08 to 0.6 times that of the Sun.

The smallest radius of a red dwarf known is just 9% of the Sun’s radius.

Red dwarfs have low mass because of which they have less pressure and cannot accommodate intense fusion. This leads to low temperature, resulting in a dimmer star.

Like Jupiter, brown dwarfs are sometimes referred to as “failed stars”. They form like other stars, through the accretion of gas and dust.

Although they are more massive than a planet, they aren’t massive enough to support nuclear fusion in their cores — thus the name “failed star”.

All the brown dwarfs discovered so far are part of binary systems, and their masses range between 15 times Jupiter’s mass to 75 times.

Because they cannot emit their own light due to lack of nuclear fusion, the dim light they do emit comes from leftover heat from their formation which cools and fades over time.

The nearest brown dwarfs were discovered in 2013, 6.5 light-years away from Earth, in the constellation Vela (prominent in the southern hemisphere).

The Smallest Stars We Know Of

The following five stars are the smallest that we know of.

Surprisingly, it exhibits both “quiet” and “bright” modes, a phenomenon that astronomers are still trying to explain. At times, the pulsar emits radiation from its magnetic poles, while its X-ray emission is dim.

At other times, its X-ray emission is extremely bright from the polar caps, but its magnetic poles do not emit any radiation.

EBLM J0555-57 is a triple star system residing 600 light-years away from Earth. Of its three stars, EBLM J0555-57Ab is the smallest star known that’s also massive enough to support nuclear fusion in its core.

OGLE-TR-122 is a binary star system 7003 light-years away. It is the smallest star in the main sequence diagonal with a measured radius.

Sirius B is also a part of the binary star system and is the smaller companion of Sirius A. Sirius A is called the Dog Star, and Sirius B is called “The Pup”.

It’s not seen with a naked eye because it is outshone by its primary star, but small telescopes pick it up quite easily.

Teide 1 is the first brown dwarf to be confirmed for its status. It resides 400 light-years away from us and is not visible with the naked eye due to its dimness.

Like all brown dwarfs, Teide 1 is more massive than a planet but lighter than a star, so its core cannot support fusion.

75% of the stars in our galaxy are small stars, and there are billions of such stars out there in the universe. They come in various formats: white, red, and brown dwarfs, pulsars, and neutron stars.

Interestingly all of them start the same way — accreting gas and dust. But their evolution from there on depends on how much they accrete, what mass they accumulate, and whether or not there’s nuclear fusion bubbling in their cores.

They aren’t visible with a naked eye because they are small and dim, but telescopes can see them.

So grab your small telescope and point toward the sky! Which small star will you seek first? 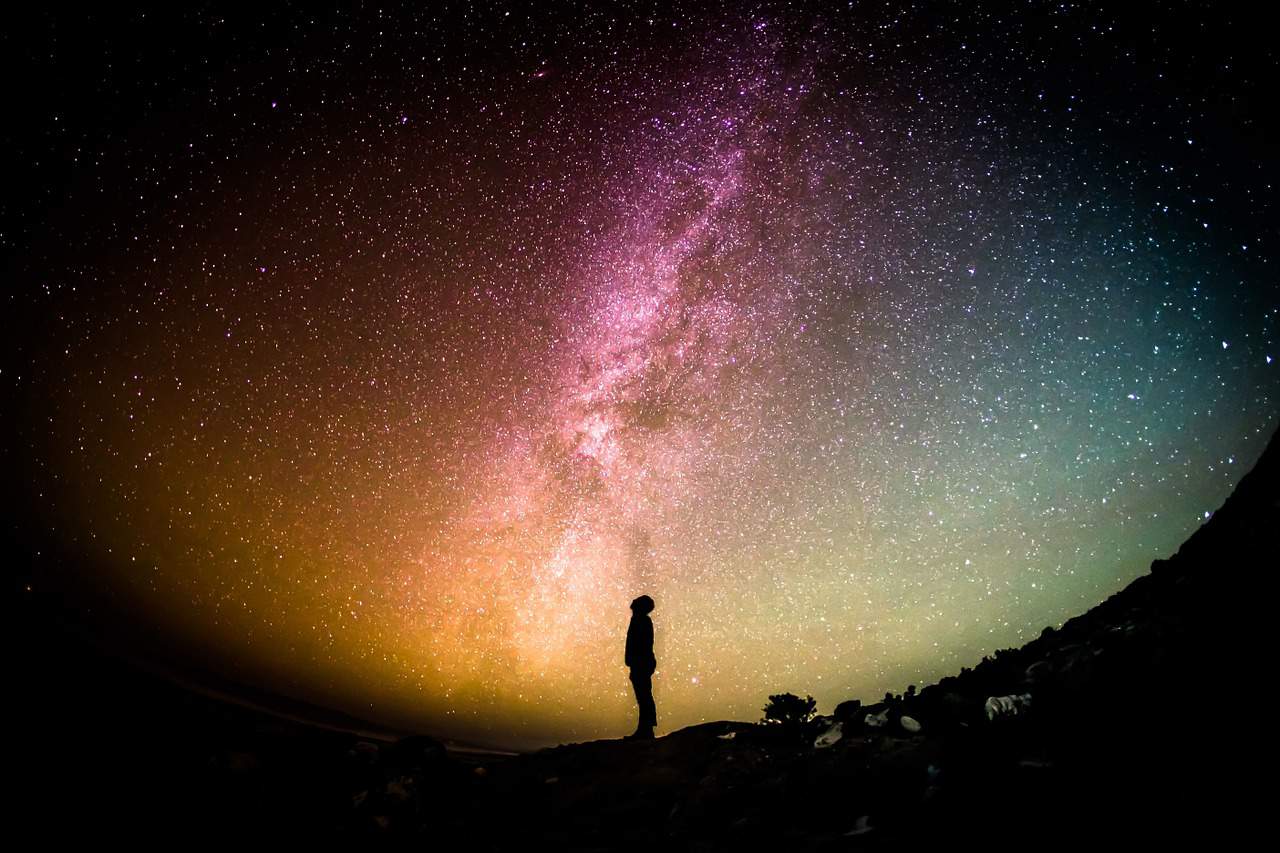 How Many Stars Can I See at Night?